and then one day you finish your last paper and start cleaning your room. you fluff your pillow and put your notebooks away and walk in circles around the space that has become yours for the past ten months. you walk and you think of the first day you went to university and got your student card. then you remember that that was not really the first day. there was a university that had come before that one,  it had offered a classroom for you to sit in, and there were months where you tried to stay there. you tried to fight your body until the day it snowed and the trains stopped working and your sister crossed a continent to come and visit you and you cried when you picked her up and she validated everything you felt as you went back to your dorm room. it led you to the  moment when you walked out and it led you to everything that has come after. you dropped out of university and you let yourself go through what you needed to go through before you could go back. but you never really went back. you went forward. you found the place that was time for you to go to and it let you in. it had a new name but spoke in the same way as the last one. voices don’t disappear just because you mute them for a while. this dealt you the kind of physical alarm of slapped cheeks that make leaves drop and birds fly away. you had no direction to go to but inside where heat melted everything you had locked up. you went through a wider tornado and found matching faces rolling through it with you. you found your many angles, all the ways you have and would be in the world , the ways you can be when the sun shines in the right way and you dare to ask a person to take a ride with you. that was three years ago or maybe it was outside of time, but it brought you to this moment where you have the distance and the language and the ache to write about a five year walk that went in different directions and made you cross yourself. from institutional progress to institutional murder, what they asked you to do was to forget. forget who named you and carried you through the doors of an academy built on stolen bodies. but chance brought you the people that spoke from a centered memory that your body recognized even when your mind could not remember. you saw yourself in the way they spoke and you found a way out.  out into places where we talk by acting and we feel by listening. where what we write is not held by quotes, it is held by flesh. on the day you leave you learn that you have just arrived. 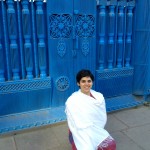 Sa Fa is a twenty four year old poet who writes about life lived in seven different countries. She weaves personal trauma and triumph with global conversations about navigating multiple identities and dealing with the consequences of the choices we make as we grow further into ourselves and into one another. Her poetry has been published by Rooted In Magazine and Bluestockings Magazine.