U.S. election politicking is distasteful even during the best of times. In our white supremacist, misogynist, xenophobic, capitalist nation—more oligarchy than democracy, further entrenched by Citizens United—candidates jockey to be the the best racist, sexist, anti-foreigner, pro-business “leader” they can be. If a candidate manages to slip through one of these categories—the African American candidate, the woman candidate, the Latino/a candidate—they make up for it on other fronts. Candidates spend millions of dollars, their own and that of the extremely wealthy, to be the chosen one(s) who can “take back” America—for rich white men.

The 2012 election, for example, showed us that it was acceptable for candidates to be openly sexist and racist on the campaign trail, as politicians promised to reduce women’s reproductive autonomy, to be “tough on crime,” and to go after terrorists. All of this to widespread applause at campaign stops around the country, especially in conservative regions where threats to white supremacy are met with hostility and violence. The ugly spectacle of faux democracy in 2012, along with the similarly misogynist and racist 2014 midterm elections, legitimated hate and paved the way for our current election cycle, which has hit a new low.

Last week, Republican frontrunner Donald Trump expressed support for a database of Muslims in the United States, a registry so that “we” can keep track of “them.” Trump, of course, is no friend to civil liberties. We know this from his 1989 advocacy of the death penalty for five Black New York boys whom police had forced to confess to a rape and attempted murder they did not commit and Trump’s subsequent refusal to apologize to the boys in the face of exculpatory evidence so overwhelming that the state has dropped the charges. The youths (now adults) have been awarded millions of dollars in compensation for their wrongful imprisonment and received an apology from the state. But Trump is not alone.

Other officials have shared similar views, with the Democratic mayor of Roanoke, David Bowers, celebrating internment of Japanese Americans after the bombing of Pearl Harbor. Reinforcing this anti-immigrant, nativist, racist hysteria, roughly thirty governors, all but one of whom is a Republican, vowed not to admit Syrian refugees into their states. Of course, this clearly defies the U.S. Constitution, as only the federal government has ultimate jurisdiction over immigration. Perhaps most shocking about these declarations is not that they were made in the first place, but that they have received very little pushback from other elected officials and mainstream media, as former Secretary of Labor Robert Reich noted on his Facebook page. 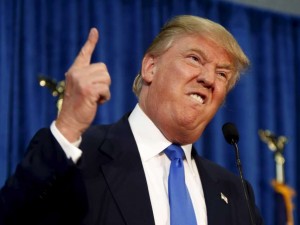 But let’s be clear about what just happened: in a nation founded on principles of religious freedom and expression, a major candidate in a presidential race has suggested that we target, profile, and “manage” a group of people on the basis of their religious beliefs and presumed ethnicity. This is fascism, not democracy, and it represents the fullest expression of the state’s racist and xenophobic biopolitical impulses. Little surprise that pundits are connecting Trump’s comments to Nazi Germany. Hitler, who felt it useful for governments that “men do not think,” moved far beyond registries and special identification badges to containment and extermination.

Hate is a slippery slope, but the U.S. has an insidious history of draping itself in the mantle of patriotism while squelching human rights both here and elsewhere.

Simultaneous to Trump’s comments, the House of Representatives “easily passed” a bill tightening restrictions on Syrian and Iraqi refugees entering the United States. Forty-seven Democrats joined their Republican counterparts in support of the bill, demonstrating to the world that fear, hatred, and exclusion are bipartisan sentiments in the U.S. Rejecting the refugees—“widows and orphans,” in President Obama’s invocation of gender politics—is a logical continuation of the post-9/11 American security state, in which some bodies and lives are secured at the expense of others, forcing the marginalized into ever greater precarity.

Trump’s Islamophobia, shared by all too many around the world, in which the Other becomes a datapoint to be managed rather than a human being, and Congress’s anti-refugee bill embody a “logical” connection between biopolitics and fascism. Michel Foucault theorized biopolitics as the application of political power to human life, with “race” positioned as a technology of classification. Achille Mbembe moved beyond biopower, which he saw as insufficient to account for contemporary forms of killing, to necropolitics, locating the sovereign state’s right to kill in histories of colonization. Fascism is an ideal political form for the expression and operation of necropolitics, allowing the authoritarian state to decide whose lives matter.

Though some have suggested that comparisons of Trump and other contemporary racists to the Nazis “inherently cheapen” the evil of the Holocaust, to not draw such comparisons would be to ignore the historical lesson of a charismatic and popular leader whose racist hatred led first to biopolitical management of people classified as Other and then to mass genocide. Trump is not simply amusing in his buffoonery, nor is Congress simply going about the business of protecting the citizenry from foreign others in a post-9/11 age. What we are witnessing is the rise of fascism in the United States on every front—from mass incarceration to reproductive injustice to border control—and we ignore it at our very great peril.