#ShoutYourAbortion: I’ve Had Two Abortions and I Don’t Regret Either of Them – The Feminist Wire

Home / Black Girls / #ShoutYourAbortion: I’ve Had Two Abortions and I Don’t Regret Either of Them

#ShoutYourAbortion: I’ve Had Two Abortions and I Don’t Regret Either of Them

The first time I was pregnant, it was as a result of rape by my then boyfriend’s close friend. I was only 18. After being raped, I did not go to the hospital to get a rape kit done or report my assault to the police. I was too emotionally scarred and afraid of what my rapist would do to me if I told. I kept it a secret from everyone.

I found out that I was pregnant when I missed my period the next month. I was scared. I felt overwhelmed with guilt, shame, and confusion. So in true anxiety driven fashion, I ignored it. Those were the longest three weeks of my life. Eventually, I started suffering from severe stomach pains and fatigue from the pregnancy. My body was changing. After much internal debate and strife, I finally decided to reach out to my family doctor’s office to see what I could do.

At the time I didn’t know where to go for an abortion so it only made sense (in my head) that my regular doctor’s office could help me. When I called them, I asked if they had abortion services. They transferred me to “Family Planning.” I spoke with a woman about getting an abortion and that I thought I was about 5 weeks pregnant. She said that she would have my doctor call me back to schedule an appointment. I believed her and I waited.

After two weeks, I hadn’t received a call, yet and I was in excruciating pain from the pregnancy. I decided to call again. A different woman answered this time. She told me that I should come in to get a check up and see what options they had for me. I kept asking what I needed to do to prepare for an abortion. She continued to deflect my questions and advised me to come in for a check up. I asked how much does it cost to get the abortion, she responded with silence. I started to cry on the phone out of frustration. She said, “You’re going to be fine. We want to help you with your baby.” I hung up. I felt so alone and confused. I could not figure out why my doctor’s office would not tell me anything about getting an abortion or show any sense of urgency. Here I was, a rape victim who was keeping a secret from everyone, while also dealing with an unwanted pregnancy from my attacker. I felt forced to tell someone who could help me in order to make sure I wouldn’t be forced into keeping my attacker’s child.

I built up the courage to go to my mom. I managed to avoid telling her that I was raped. I manipulated the truth by telling her I accidentally got pregnant with my then boyfriend. She then did something I didn’t expect… She told me that she had an abortion at my age and that it was okay, that I was okay. And right in that moment, I fell in her arms and cried. I never felt so relieved. I felt like so much shame and secrecy was lifted from my shoulders. I never realized how common abortions were, but more, that different types of people get abortions for different reasons. Even my about-her-business type-A personality mom was just like me.

My mom helped me find a clinic, set up the appointment, and took me to get the procedure that same week. I had saved some money up from my job, so I was able to afford it with the little bit of savings I had. I never dealt with the attack of my rapist, or told my family or my boyfriend about it. But I got the abortion with the support of my mother and continued to be emotionally supported afterwards.

My second abortion was a completely different circumstance. I got pregnant due to not using any protection with my then boyfriend when I was 20 years old. At the time I was in a committed loving relationship where our idea of prevention was pulling out. I was very comfortable in this decision to not use protection. And eventually, it backfired. I never believed that it would happen to me when it seemed like we were so careful, but it did. It took me getting pregnant (a second time) to convince me that using protection is important to prevent pregnancy.

When I found out that I was pregnant, it wasn’t from a missing period, but from severe stomach pains (again). My then boyfriend and I were very proactive in having a conversation about what we both wanted. We decided to get an abortion because we were not ready to have kids. We made the appointment together, paid for the abortion together, and never looked back. He supported me emotionally through the abortion and understood how much this may affect me more than him. I never felt regret in our decision, nor did I feel regret in doing something that affects my body and livelihood.

There are no rightful abortions or bad abortions. Both of my experiences speak to circumstances in which the autonomy I had over my body was necessary to do what was best for me. I did not want to have a child in either situation, regardless of mistake or tragedy. During my first abortion, I felt sadness around my assault and what I had to go through to begin my healing. But I never regretted the actual abortion, just the inconvenience of it. I always felt guilty that I wasn’t ashamed or in mourning. My second abortion, although more painful than the first one, did not make me feel any feelings of sadness or regret either. I felt relieved and happy that I was in a supportive relationship at the time. And of course, that same guilt of not feeling bad about making a valid decision for myself set in.

In retrospect, I realize that the stigma of shame attached to abortion and the policing of bodies is why I carried so much unnecessary weight on my heart. I reflect on how this same stigma is what might have prevented me from getting my first abortion due to my doctor’s office trying to make it more difficult for me to find the resources I needed. By addressing this stigma through the #ShoutYourAbortion hashtag, it allows for the radical reality that abortions are not shameful. Sometimes abortions are due crisis and sometimes they are just happenstance in which we have our own unique reaction to.

I am very happy where I am in life and with my decision making. I’m childless and not hindered by an unwanted pregnancy. It’s powerful and important that we challenge the shame and silence surrounding abortion. Reproductive justice is more than saying we should be allowed to receive and have access to abortions. It demands that we address the stigma around the who, why, how, what and when of our abortion experiences. We don’t have to be raped, in a life threatening situation, or destitute to get an abortion. Body autonomy is not limited to circumstance. Therefore, our circumstances, our bodies, our choice, and our response to our choices should not be policed. 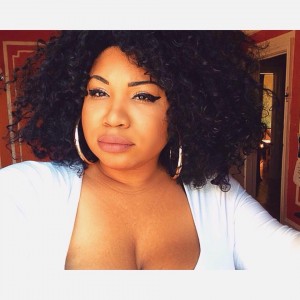 Ashleigh Shackelford is a radical queer Black fat femme writer that resides in Baltimore, MD. Ashleigh is a pop-culture enthusiast, a community organizer at Black Action Now, and the founder of a body positivity organization, Free Figure Revolution. She is currently pursuing her master’s degree in African American Studies at Morgan State University.