EMERGING FEMINISMS, The Silence of Burning – The Feminist Wire

EMERGING FEMINISMS, The Silence of Burning

I’ve written poems about Silence before

Poems about how loud

Poems about my Silence

Poems about the Secrets

But this is a different kind

A Poem about cycles of Violence

A Poem as Expression of thoughts

But a Poem for a time

Instead of being acted upon

This is a Poem,

Not so much of Knowing Reflections

But of current Confusions

I watched the CVS burn

I watched the crowds run

The Police move in

That my whiteness immediately agreed with:

Then I saw Support

Of the Hypocrisy of whiteness

Of the Cycle of state violence that needs breaking

And I swallowed the other words

And remembered all I’d learned

Trying to make sense of the

Trying to come to an inner

Of how I Feel

And I’m sorry because part of me still wonders

I stand in Solidarity

Tape over my mouth

TIRED OF THE VIOLENCE

IT IS TIME TO TALK

I listen to the Stories

Who are Silent No More

We all aren’t just Searching

We are claiming our Right

That yelling “Fire” is more Effective

So now I understand

That Baltimore has had to

Make Fire in the Streets

I don’t know how I Feel

I want to Believe in Peace

But then I hear the Echoes of Names:

And I hear the Echoes of Names:

I sit in Silence

Sometimes it is Good 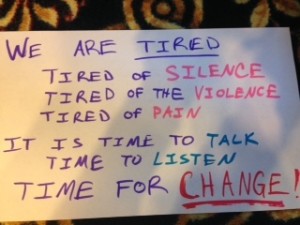 This poem is not complete. It is written to express and make sense of the chaos in my mind, but it cannot contain it all. I offer this explanation to further organize my thoughts and to connect two significant events that come together in my mind and are teaching me about violence and myself– the Baltimore Riots and the Silent No More Protest at UConn.

On Monday, April 27, 2015, Baltimore’s streets were aflame and a CVS burned. In the following days I couldn’t get Baltimore out of my mind. I watched as the racist hate speech against Baltimore communities, turned into support of and for Baltimore communities. My fellow “Facebook Feminists” posted articles on the hypocrisy of whiteness – naming the times that whites “rioted” and nothing happened. And how change has come from the use of violence against the state. In this moment, I felt the weight of everything I’ve learned from my own journey: the injustice, the violence, the pain, the sorrow, the fear. And I remembered how I felt.

Freshman year of college I was facing three Title IX cases, still living among the men I had reported. I was tired, hurt, sad, scared. I wanted to know that what I was doing was right, but doubt can be like an old friend sometimes. As I watched Baltimore burn in my mind, I understood the unbelievable anger. I know for myself, there have been times where non-violence feels unimaginable. When the injustice you have faced boils inside of you and you feel like you are going to erupt.

But there were also non-violent protests for days before the fires. At first I didn’t understand why this changed, I was upset that the media coverage of the riots failed to show and discuss the efforts of thousands of protestors. Peaceful protesting is powerful; it is what I want to believe in as the answer to violence’s questions.

So, I have seemingly opposite inclinations: a yearning for peace and violence. 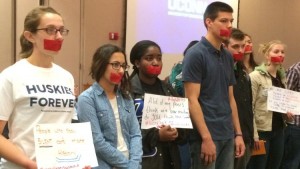 Despite my conflictions, the morning of Wednesday April 29, 2015 I stood in solidarity at the University of Connecticut Board of Trustees meeting. I, among twenty or so other students, duct taped our mouths and wrote signs to say what our vocal chords had failed to, what the Administration had suppressed. This was a peaceful protest against the violence and injustice on UConn’s campus. But make no mistake, it was the kind of protest with fire behind it as we demanded institutional accountability. Each of us had our own reasons for showing up, for what we wrote, for what we said if we spoke. It felt productive to visibly show that even if we are tired, we will not stop. As people asked the Board repeatedly if they were really listening, we heard time and again, “We hear you, we are listening, and we agree.” 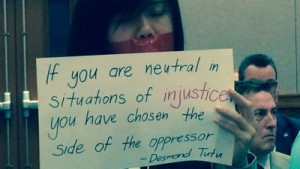 I am still working on how to express my political solidarity within a deep context of white supremacy that thrives off of racial, sexual, and gender violence. I understand I have my privilege within this system—and I am working on how to articulate what anti-oppression means to me.

I have just come into Feminism, and while I feel empowered and I have found a community within it, Feminism has also given me the space to be OK with the fact that I am stuck between a politics of love and a politics of rage. Despite my inner conflicts and struggles, I heed Audre Lorde’s call and continue “my work.” Social Justice requires work and reworking of ourselves. I have started and I am committed to this work—be it in the church, alongside my peers, with the support of brave faculty and graduate students—because even if I’m not doing this work exactly right, it is a start. It is the beginning of a lifelong journey committed to helping build an equitable community, society, and world. 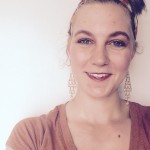 Grace Kuell is a junior double majoring in Psychology and Women, Gender and Sexuality Studies at the University of Connecticut. She has always loved writing, taking after her father who became a free-lance writer after losing his sight. She has often found relief and a sense of solace from writing about the things that trouble her and can be very hard to speak about. She is a Resident Assistant for Social Justice at UConn and continues to partner with members of her church on Social Justice Initiatives.