Patricia Arquette’s recent remarks during the Oscars made for strong debate among feminists of color and white feminists in the U.S. Arquette stated that women, in this case white women, helped gays and people of color in the U.S. in their struggles for their human rights, and that now it was their turn to help women [read: white women] achieve wage equality. The remarks spurred much anger and questioning of her white privilege. That same dynamic occurred when Sean Penn stood up to present the Academy Award for Best Picture to “Birdman” director Alejandro González Iñárritu and said, “Who gave this sonofabitch a green card?” The sentiment, widely shared on twitter by Latin Americans in the U.S., was that the Oscars proved that even when Latin Americans win the highest honor, someone will without a doubt ask for your papers.

For me, the question also became about what happens when people like Arquette and Penn take their white privilege into developing countries like Haiti, placing themselves in the role of white savior. Because what seems to have been overshadowed by both of their highly insensitive remarks about the gay community, communities of color in the United States, and immigrants is that both of these personalities believe themselves to be supporting Haiti’s sustainable development.

What does it mean when people who don’t recognize their white privilege or racist actions—Arquette recently dressed as a stereotypical “Chola” for Halloween and Penn never apologized for his remarks at the Oscars in fact he stated he “didn’t give a f*ck about all of this.”—go abroad to “help” Brown and Black people through development projects?

Arquette’s commentary promotes the idea that the U.S. is a post-racial, post homophobic society with a civil rights movement that has achieved full equality for people of color and a gay rights movement that has secured gains for LGBTQ communities in all fifty states. These assertions are expressed in a country where 64,000 African American women are missing and where every week so far this year, one transgendered woman, most of whom are women of color, has been killed because of who they are. While Penn’s remarks were dismissed by Iñárritu as “hilarious,” many of us who are considered Latin Americans did not find them so funny. For us, it was another humiliation and a reminder that racism and white privilege are the forefront of some of the toughest challenges for Brown and Black freedom and true equality.

Don’t talk to me about privilege. As a kid I lived well below the poverty line. No matter where I am I won’t forget women’s struggle.

Given that Arquette doesn’t understand how she could possibly be White, a woman, poor, and still be privileged, I politely direct her to Peggy McIntosh’s 1988 article “White Privilege: Unpacking the Invisible Knapsack.” Penn should know better given his liberal activist persona, but what kind of expectations can one have of a man who was charged with domestic assault and pleaded to a misdemeanor? Yes, these are the type of people that find it quite easy to go to developing countries, develop reputations as “do-gooders,” and become the epitome of white saviors without any question as to their backgrounds or even whether their skills are fit for the job. Whereas, Haitians who set the example for all Latin American nations by being the first to overthrow colonialism and ban slavery outright are constantly being viewed through a white gaze that has sought to entrench the prejudice that they are not capable of handling their own development and freedom. What does it mean when Arquette and Penn export this narrow and ahistorical view of the world to Haiti and other places in the Global South?

Arquette and Penn’s comments immediately reminded me of Teju Cole’s assessment of the industrial White savior complex and its impact on development policies that focus on people of color both at home, here in the U.S., and abroad. Cole has said that the “white savior supports brutal policies in the morning, founds charities in the afternoon, and receives awards in the evening.” Sounds familiar?

The White savior industrial complex, according to Cole, plays an important role in the current system of global pillage. It provides a safety valve for unbearable conditions created by foreign imperialists in places like Haiti. In this context Arquette and Penn, as well as other white personalities, play an important role in sustaining that very oppressive system. The challenge for these white saviors, according to Cole, is in thinking beyond their prime objective of doing good and feeling good. These celebrities don’t see or don’t want to see the machinations of power behind extreme situations like those in Haiti. The role colonial powers like France, U.S. foreign policy, and non-governmental organizations play in undermining Haiti’s independence scape these White “saviors” because as Cole has already stated this industrial complex “is not about justice. It is about having a big emotional experience that validates privilege.” 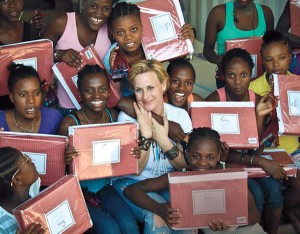 When I look at Arquette’s charity, Give Love, through this White savior lens and as part of an industrial complex I cannot help but challenge its role in Haiti. Arquette’s organization claims to support “Community-led sanitation projects to improve public health & create jobs around recycling,” but upon closer inspection of its website, it’s extremely difficult to identify how, in fact, communities in Haiti are leading these projects. If she is really trying to “help” people in Haiti, doesn’t it behoove her to ask Haitians if and how they want help and ensure Haitians themselves are leading the changes they want to see? When organizations like Give Love only pay lip service to community leadership they dismiss the autonomy, dignity, and self-respect of the very people they are claiming to help. If you ask Penn about his charity the first thing he will spout out and that is very evident in his website is that he hires mostly Haitians. Good for him! But hiring Haitians to implement your vision and that of others with privilege only perpetuates prejudices and reinforces the oppressive system that Haitians have been trying to fight off for centuries. In fact, Penn went from being a do-gooder whose ambitions may cause more harm than good to being a political operative when he asserted that the current president of Haiti, Michel Martelly, had transitioned to his post democratically and peacefully and then proceeded to dismiss the thousands of Haitians that regularly protest Martelly’s presidency and call for his resignation. Because as former Haitian Prime Minister Jean-Max Bellerive put it: “the line between intrusion, support and aid is very fine.”

Currently, most aid to Haiti is directed to more than 300 officially recognized non-governmental organizations (NGOs). This situation begs the question: are NGOs like Arquette’s and Penn’s good or bad for Haiti’s development and sustainable independence? Are they somehow less corrupt then the Haitian government, or are they just tools of foreign imperialist efforts, wittingly or unwittingly playing the role of undermining Haitian autonomy and independence?

A first glance at the work of Arquette’s charity in Haiti would have the average person nodding in support, myself included. Who wouldn’t agree with the need for improved sanitation in a global context where more people have a cell phone then a toilet! Would I donate the $50 so that a family or school has a toilet that will ensure sanitation needs are met? Sure, I would. And as for Penn’s work, he’s brought millions of dollars to Haiti but he also has done real damage to Haitian autonomy by working with the people in the halls of power including the U.S. government and army, MINUSTAH, and the IMF to implement projects that support the existing system, which was founded by imperialist nations including the U.S., rather than question that system and truly put Haitians in the proverbial driver’s seat of their own freedom!

Yes, there is much more to “making a difference” than making a donation, especially for privileged whites from the USA, given the role that U.S. foreign policy has played in the underdevelopment of Haiti! If Arquette and Penn want to support Haiti, they and their organizations should also consider addressing questions of U.S. foreign policy which has swung from invasion and military occupation to the removal of President Aristide. Because there is a very small difference between using your privilege to transform the world and just making yourself feel good. 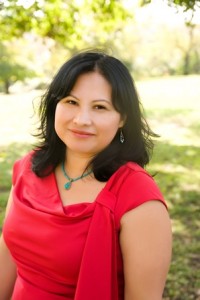 Natalia Cardona is from Guatemala.  She has been active on issues of militarism and economic justice for more than a decade. She began her career at UNIFEM’s Andean Regional Office in Ecuador. Natalia also spent nine years at American Friends Service Committee lobbying to change U.S. military and economic policy in Latin America and the Caribbean region. She also worked as Program Director for the Center for Women’s Global Leadership leading their work on militarism and violence against women as well as social and economic rights. And is currently the Membership and Constituency Engagement Manager at the Association for Women’s Rights in Development (a global network of feminist organizations).