On the Eating of Tails by Lily Hoang – The Feminist Wire

Home / Arts & Culture / On the Eating of Tails by Lily Hoang

On the Eating of Tails by Lily Hoang

On the Eating of Tails

Once I wrote a miniature book that I called a novellete that I called Webcam Sex and it was about webcam sex and it was written in a style that was a mockery of Tao Lin and Marie Calloway because I was bitter and this was years ago and does anyone even care about Marie Calloway anymore? and a publisher offered to publish it and I was very happy about this. The publisher who offered to publish it wanted to publish it electronically and Webcam Sex would launch the press’s eBook series and this made me rather pleased. I was pleased because he is a model literary citizen. I wouldn’t call him a hero but I admired him greatly and he did all sorts of good things for indie lit and I liked him immensely although I’ve met him only once. Maybe once, maybe never, but I’m pretty sure once I have shaken his hands and maybe spoken a few sentences but I can’t remember, not for sure at least and I have a terrible memory and Xanax and certainly doesn’t help improve my memory but it does feel awfully good and often I wonder if this is what people without anxiety feel like but no—it’s just another chemical euphoria and I don’t think of any consequences, I can feel only the standardized immediate relief, its predictability: how calm will slip through my body and in. I take Xanax but I don’t take it often because everyone else loves it and I only like it but I take it when I need it and I take it for fun and when I need it sometimes I don’t take it at all so I can save it for fun and anxiety is an explosion and it is a crushing and I don’t take the Xanax then. I reject amelioration. I reject feeling better. I fester. I deserve it. And once a blog accused me of cronyism because on another blog many years before I had written a comment about how I don’t like to submit to journals because I hate rejection and the person took this to mean that I never submit to journals and every single one of my publications must’ve been printed on the back of cronyism and this was obviously ridiculous or I was in my hotel room crying because people can be so hateful and they can be so mean and I don’t take a Xanax and the person who wrote the blog sent it to my chair and I had only had the job for a month and already—this. Maybe I met this publisher once but I can’t even remember and so let it be known that it was not through cronyism that my book on webcam sex called Webcam Sex was accepted for publication. Except that it was solicited. 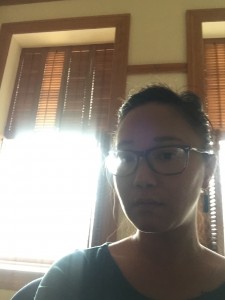 LILY HOANG is the author of four books, including Changing, recipient of a PEN Open Books Award. With Joshua Marie Wilkinson, she edited the anthology The Force of What’s Possible: Writers on the Avant-Garde and Accessibility. She teaches in the MFA program at New Mexico State University, where she is Associate Department Head and Prose Editor for Puerto del Sol.
First published in Litscapes: Collective Writings 2015.