Moving Images: On Queerness and Eritrean Identity – The Feminist Wire

By Guest Contributor on February 9, 2015

Masculinity was the last thing I learned how to do. I wasn’t one of those baby dykes who literally knew in utero. I thought girls were cool, and that Xena didn’t need no man because Gabrielle was more than enough. That was about it. I wore dresses. I didn’t mind them. In fact, I had style. My mother always joked about how my dresser drawers were such a mess because I spent so much time changing throughout the day. A practice I have long since abandoned, but you still won’t catch me past my yard in sweats.

Image is everything. No grocery store trips in pajamas for me, and no dresses either, unless you land yourself in my mother’s living room where she hangs relics of the daughter she once had. Some of those images captured just six or so years ago. But besides the very awkward family photo we took relatively recently where, much to my parents’ discomfort, the photographer spent the whole time referring to me as their son, there is no pictorial evidence of who I’ve become.

Don’t get me wrong. My parents didn’t disown or shun me. When I came out my mother freaked out, demanding to know who else knew. It became a question of family image. Then, she was silent, and then nitpicked about hair length, and then stayed silent some more, and then invited my girlfriend at the time over for Christmas. This happened over the span of years. My father just remained silent, but his quietly growing acceptance, if not of me but of circumstances, was clear in his own immigrant dad way, like the time he snatched off a hat he was wearing after discovering it belonged to my sister and not to me. Now, it was a woman’s hat he couldn’t possibly wear in public.

See, image is everything. My father didn’t want to be seen wearing his feminine daughter’s hat no matter how he felt about it moments before, and honestly, I wouldn’t wear it either. But I will wear a netela to cover my head at funerals with all the other Eritrean women, and the once-a-decade I go to church, I will proudly sit with them, too.

Personally, I don’t have a strong claim to any gender. Womanhood is a close enough home base, but I sometimes wander away from home. And when I walk the streets of my neighborhood at night, I know who they see when they ask me, “Brother, do you have an extra cigarette?” I deepen my voice as I tell them yes, while they start to talk about how hard it is out here. After which they always seem surprised because they’ve probably never had another dude listen to them so attentively before. But I don’t correct them. I’m in no rush to get home.

I will stop by the smoke shop to replenish my supply where two different people will decide I am three different genders. I will walk past the group of black women who chill and smoke weed around the corner, and I will smile as one of them says, “She’s fly,” thinking I can’t hear her over my headphones. But mostly I will hear, “Brother, do you have an extra cigarette because it’s hard out here?”

When I get home, I remove the layers of deliberately configured fashion that straighten and bind the curves, keeping the essential articles near lest someone knocks on my door. I can’t carelessly rummage through my drawers anymore. The image of gender requires diligence and preparation. I will throw on and off a baggy hoody depending on how many times I need water in the night and who is in the living room at the moment. And when I don’t particularly feel like it, I will time my bathroom use with my roommate’s friends’ smoking expeditions to the stoop. I’ll step out into the hall quickly as I hear the front door shut, like we are partners in a dance they just don’t know they’re in.

The idea of gender being a performance used to annoy the hell out of me, because I thought it meant it wasn’t real, or worse yet, that I wasn’t being real. Then I started to examine everything my mother taught me in her quasi third world feminist way, which I like to joke led to my “lesbianism.” (FYI, she doesn’t like that joke.) The ideals she ingrained in me before I knew what it meant to be queer: sisterhood, self-reliance, and how to be a good daughter.

All of this was predicated on the idea that I was to be a standard, Eritrean, hetero girl. Although some of her values were old-fashioned, many of them were nuanced and as feminist as anything I’ve ever heard. She didn’t teach my sister and me to be subservient or that marriage was the gold metal in girlhood success. But she still taught us gender as if it were a dance lesson, where even when the choreography is the same, everyone’s body naturally moves distinctively. Sometimes you realize you’re registered for the wrong class.

I accept that my mother taught me about femininity before I learned masculinity. Though I began to resent being on the roster and seeing the old photos that lined the wall, my militant dyke days passed with minimal strife because I understood that life could never be a still image. It moves cinematically, and just because my mother likes to revisit a few of her favorite scenes, it doesn’t mean she hasn’t accepted that I’ve moved onto the second act.

A few years ago, I used to run a blog called QUEERITREA, which just like it sounds focused on the intersection of queerness and Eritrean identity. I got to meet some cool queer Eritreans this way. I also got a bit of hate (like I imagine I will for this), because some felt I was blemishing the Eritrean image. I remember discovering a thread on a popular Eritrean forum titled “there’s an Eritrean gay girl in Seattle,” with my photo underneath and a link to the site. Responses varied from support to disgust to pure apathy. I was amazed and slightly terrified that my open existence was at all newsworthy or interesting to people.

But of course it drew interest. Because image is everything, and the Eritrean image is hash-tagged “no homo.” When you’re a part of a small immigrant community, finding a respectable identity in a world that is largely either apathetic or antipathetic to you, is crucial to survival. In today’s world, respectability is still too often defined by gender conformity and heterosexuality. And in many parts of the postcolonial world, queerness is seen as Western.

Yet third genders and other queers existed long before Western imperialism descended on East Africa, although I couldn’t tell you much about them, because those traditions were buried, twisted by or lost in colonial rule. The image of queerness may currently look Western, but I beg you to widen your lens. No matter where you go in the world, you will find us. This myth of Eritrean authenticity has nothing to do with historical continuity and has everything to do with what we can’t know, and ironically, with European standards.

My feminine, heterosexual sister’s womanhood looks vastly different from my mother’s feminine, heterosexual womanhood, because they are different people, and the images they’ve staged and lit to approximate their respective truths couldn’t ever look the same. This is all image is, a snapshot at the best possible answer anyone has to offer at any given moment. If we gave people the complexity of every aspect of our identity always, we would never get anything else done. Hell, we couldn’t even get that done.

I learned masculinity last. I say learned, not because it isn’t who I truly am, but because no gender expression or identity, no matter how normative or queer it is, is expressed without the world’s interpretation in mind. And this is okay with me, because ever since I was a little girl treating my family’s duplex unit like backstage at the Apollo, I have concerned myself with image.

It took me awhile to realize what felt right for me, because I didn’t know there was another option. As we move into a more connected world, the Eritrean community’s image of itself will change to better showcase its own diversity. The queer community’s image will change to show it isn’t a white, Western fad. But image, as an expositive tool, will never stop mattering. It will only move. 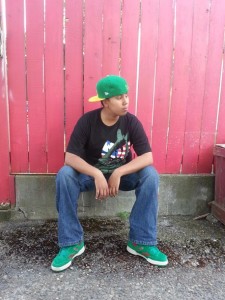 Hel Gebreamlak is a queer, black, disabled writer. Her work has been published in Black Girl Dangerous and Racialicious. She has worked as a social justice educator, and recently has started on a path to pursue filmmaking.