By Sikivu Hutchinson on February 9, 2015 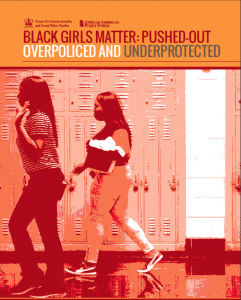 “Let them haul the little monster out of school and into jail”.  These were the words of a commenter on CNN.com’s site responding to an article on the handcuffing of a six year-old black girl named Salecia Johnson at a Georgia elementary school in 2012.  Disproportionately targeted by zero tolerance discipline policies, black preschool and elementary school children have the highest rates of suspension and expulsion in the U.S.  While demonizing black children has always been a treasured American tradition, little black girls have never been included in white heterosexual gender norms of sugar and spice and everything nice.  From Topsy to Sambo to Buckwheat, the specter of the wild borderline criminal black pickaninny, destined to come to a violent end, helped frame narratives of white childhood innocence and American national identity from the 19th century to the present.  The hapless motherless Topsy, a black girl caricature featured in Harriet Beecher Stowe’s novel Uncle Tom’s Cabin, was one of the first and most enduring minstrel images of black children under slavery.  In the book, Topsy is contrasted with the virginal angelic character of Little Eva, the white daughter of a “benevolent” slaveowner.  The fount of moral goodness, Eva forgives Topsy her thievery and “heathen” ways, making her promise that she will become a good Christian.

Images of chaotic uncontrollable black femininity continue to influence the policing of black girls in public space.  The unique academic, social and emotional toll that criminalization takes on black girls is the subject of the African American Policy Forum’s (AAPF) new report “Black Girls Matter: Pushed Out, Overpoliced and Underprotected”.  Under the direction of legal scholar Kimberlé Crenshaw, the AAPF has been at the forefront of challenging President Obama’s My Brother’s Keeper initiative to include girls of color.  Nationwide, black girls are suspended six times more than white girls.  In big city school districts like New York and Boston, black girls are a whopping 90% and 63% of girls who are suspended.  “Rates of expulsion were even more strikingly disproportionate between black and white students, especially among girls.”  By contrast, black boys are suspended three times more than white boys.  Yet, much of the national discourse around school-to-prison pipelining either focuses exclusively on boys of color or shoehorns girls in as an afterthought.  The traditional racist/sexist marginalization of black girls’ lived experiences means they often fall through the cracks of culturally responsive intervention and prevention strategies that address state violence.  According to the report, “Black girls sometimes get less attention than their male counterparts early in their school careers (because they) are perceived to be more socially mature and self-reliant.”  As Crenshaw notes, the myth of black girls’ resiliency often precludes focus on the gendered and culturally specific ways black girls are targeted by disproportionate discipline policies.  Hence, “It’s important that (black girls’) resiliency not be used to cover real life burdens and obstacles.”

The myth of the strong, self-sufficient “everyone’s rock” black woman is legion within mainstream American culture, helping popularize and sustain a thousand neo-mammy images.  From a very young age black girls are taught to be mega-caregivers; self-sacrificing and devout, placing everyone else ahead of themselves, branded as unwomanly if they don’t toe the line of respectability politics.  When she was in her senior year “Victoria”—a former foster care youth and first generation college student—would routinely come to school three or four days a week.  Entrusted with taking care of her younger siblings, Victoria often fell behind on her schoolwork.  She was also a sexual abuse survivor living in a building where a female resident had been raped in the garage.  Now in her second year of college, Victoria’s experiences were common among the girls that I’ve worked with in my Women’s Leadership Project (WLP) gender justice program. 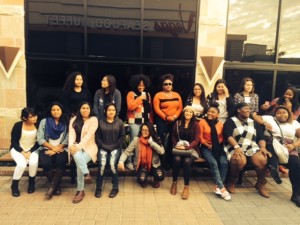 While male students are generally not expected to shoulder the burdens of childcare and caregiving, these are routine expectations for girls of color.  In her 2002 teen girls’ of color anthology My Sister’s Voices, Iris Jacob (who was eighteen at the time) writes poignantly about the toll the unequal burden of caregiving takes on girls of color:

Girls of color have forever been caretakers.  That is what we are taught, from babysitting our siblings to cooking for our families.  Part of being a caretaker means defending men of color—our fathers, uncles, brothers…We have been trained to stand by them…We as females of color have been told that sexism does not exist for us or is not important.

WLP students report that caregiving, domestic responsibilities and supporting younger siblings are a tremendous source of stress, reducing time for self-care, schoolwork and college preparation.  Adding to this dynamic, black girls disproportionately experience sexual violence, intimate partner violence and trauma.  Many of the young women in WLP are abuse survivors.  As the report notes, because they live in an environment that normalizes anti-black anti-female violence girls may “act out” due to “untreated trauma”.

Yet, even as they grapple with trauma and victimization, black girls across academic lines are saddled with the stereotype of being loud, unruly, “ghetto” and too outspoken.  While being inquisitive and assertive in the classroom is often encouraged in and expected of boys, these same qualities are tacitly discouraged and viewed as disruptive when exhibited by black girls.  As AAPF researcher Monique Morris notes: “There is an important point of departure between the conditions affecting Black females and males with respect to the role of discipline and educational attainment in the ‘pipeline’ between schools and carceral institutions…the behaviors for which Black females routinely experience disciplinary response are related to their nonconformity with notions of white middle class femininity, for example, by their dress, their profanity, or having tantrums in the classroom.”  Bucking white hetero-norms, black girls are often targeted and penalized for not being sufficiently “ladylike” or deferential to authority, a dynamic that is especially insidious when they’re hypersexualized by male peers.  The report notes that black girls are particularly vulnerable to being disciplined for defending themselves against sexual harassment, physical abuse or bullying on school campuses.  My former student “Victoria”, who is straight, was suspended for one day after she attempted to defend herself against a boy who hit her and called her a bitch.  “Jada” and “Megan”, 10th and 11th grade WLP students, were pushed by their school principal after getting into an argument with him about going to class. Getting suspended for fighting back against sexual harassment, physical abuse or bullying is also common for queer and trans girls of color who are may be viewed by school administrators as having provoked attacks by straight or cis students.  In 2002 Washington Prep High School in South Los Angeles (a former WLP site) was the subject of a lawsuit partly as a result of over-disciplining LGBTQ students.

Damned if they do and damned if they don’t, black girls who are pushed out of school are more likely to become incarcerated and pregnant at an early age.  Yet, there is no mainstream fascination with, nor celebration of, the untapped brilliance/dynamism of incarcerated “outlaw” black girls.  Ever infatuated with the “primitive” hyper-masculine ingenuity of black “thug” life and gangsta culture, mainstream America has no cultural space for black girls who’ve been incarcerated.  Indeed, the tabloid fetishization of young white female convicts—from Amy Fisher to Susan Smith to Jody Arias to Amanda Knox and Casey Anthony—humanizes them as privileged objects of sympathy, pity and cultural identification (while demonizing or marginalizing women like Marissa Alexander).  At opposite ends of the state violence spectrum, criminal white girls get framed as victims while slain black men get framed as either public enemies or martyred icons.

Thus, when feminists of color argue that the criminalization of black girls demands a national policy focus we’re still confronted with the “all of the women are white and all of the blacks are men” regime.  As a publisher who recently rejected a book chapter I wrote on the policing of black girls in K-12 schools indicated, black boys “crises” should be our primary focus.  Pushing back against this rhetoric, the AAPF report emphasizes the need for disaggregated educational data that reflects race/gender disparities (for example, the U.S. Department of Education and most school districts do not provide discipline data that has been disaggregated by both race and gender).  It also stresses the importance of youth programming and curricula that address pushout intersectionally, taking into account the impact sexual violence, trauma, caregiving/parenting responsibilities, pregnancy and the educational opportunity gap have on black girls’ lives.  Generations after Topsy, these are radical notions in a nation that preaches exceptionalism and still profits from the violent policing of six year-old black girls.

Sikivu Hutchinson is the founder of the Women’s Leadership Project and author of Godless Americana: Race and Religious Rebels and Moral Combat: Black Atheists, Gender Politics, and the Values Wars.  Her novel White Nights, Black Paradise on the Jonestown massacre and Peoples Temple is due in the fall of 2015.