Excerpt from Dear Twin by Addie Tsai – The Feminist Wire

Poppy wanted her back. She knew it was a fool’s mission. But, still. She had to try.

Poppy’s wall was lined with a white bookshelf her father made for her in the backyard one day. He’d built one for Lola too, identical to the one shoved against her own bedroom wall, cut from simple wood, painted evenly but not thick and creamy as she would have liked. The whiteness stood out against the beige of her bedroom door, her walls. The shelves her father made for his girls were as identical as their rooms that bookended their side of the house on the second floor, and their rooms that bookended their house were as identical as they were.

There, she said it. Poppy and Lola were identical twins. Mirror twins, to be precise. As if identical wasn’t complicated enough.  Mirror twins were lucky enough to be born smack dab between identical and conjoined. So, you could either thank the universe you weren’t born attached to one another, like, physically attached, like, not-out-of-choice attached for the rest of your lives, or you could spend the rest of your life wishing you were just plain old identical. As if anything about identical twins could ever be plain. Poppy was always struck by how fascinated the world was with twins. Shouldn’t the repetition in twinning invoke the opposite? Shouldn’t twins be the most boring thing ever with those double faces?

She and Lola were born without complications. In actuality it was the parental circumstances Poppy and Lola were born from that caused them the most danger. Poppy was born at 8:44 am on a Sunday morning in early September. Lola was born at 8:54 on that same Sunday morning. Poppy was born 5 pounds, 14 ounces. Lola was born 5 pounds, 10 ounces. Lola’s hip—babies were born with hips?—popped when she arrived. From that moment, the story was spun that Poppy kicked and kicked her way out, that she would always be a little bit thick and a little bit curvy. And from that moment, the story was spun that Lola was broken. From birth.

That’s what happens when twins are born. Without much question or choice, they become part of this thing much larger and snakier than themselves.

They become a thing—or things.

And here’s the thing. Most of them don’t even know it’s happening.

And here’s the thing. Most of them don’t really know how to care once they do.

Poppy walked over to her bookshelf. She crouched down to the very bottom shelf where she kept her Caboodle from middle school, her stuffed animals she was too old to sleep with but too young to abandon, and various odds and ends she wanted close to her, but didn’t consider useful enough to display. Carefully stacked to the very left on the bottom of her shelf was her stationary collection. She used to use it daily. But Poppy was 19 now, and there was a thin layer of dust clutching the edges of the plastic lids on top and the colored bottoms to remind her how long it had been since she’d last penned a letter.

But this situation she suddenly found herself in—the one for which she needed the stationary in the first place—required not just any letter, but one hand-typed on her most prized stationary. The box she kept at the very bottom, just in case Lola snuck into her room and stole it, and because only Poppy’s eyes deserved to see it.

She gingerly pulled the box out from underneath all the ones that rested above it, and took the palm of her hand and smeared it quickly, numerous times, over the layer of dust that had settled on its surface. The dust hurt her eyes, because it reminded her how she’d neglected something she treasured so much, and so she wiped her eyes with her wrists, so as not to infect them with the same contaminant that had already plagued something else she cared about so deeply.

It was the kind of stationary Lola would scoff at. The paper was crisp and white and on it was printed a black border—Poppy bought it during her phase where she thought the only color combination worth wearing was black and white—and all along the bottom tiny ballet dancing men leapt and twirled and planted their feet in the delicate white paper ground in wide-legged stances. Poppy loved so much that they were tiny—she was OBSESSED with miniatures of just about anything in the world—but she loved most that something that felt so grand, so larger than the world could also feel so attainable in miniaturized form on a piece of paper. But, it wasn’t just that. It was the rows of dancing men. Since seventh grade when she sat on the floor in Dance P.E. watching her very first Baryshnikov movie, Poppy loved watching men dance ballet. There was something about the merging of the feminine art of ballet with the masculinity of the dancers that sent her heart fluttering like a million baby butterflies. And they weren’t masculine like football players or frat boys or courtroom lawyers. They were of a softer, more malleable variety. It was the only kind of masculinity she could handle, because it was the only form that didn’t make her jump in her skin. And in this scene—she’s never been able to find it since, maybe because movies never really look the same as when your heart changes them into something more perfect than real life—Baryshnikov did a double tour (she learned the terminology later after many Youtube searches on her laptop) and it felt like he was twirling in the air upside down forever, like one of those spinner toys you find in a science museum gift shop with ribbons attached to a metal rod that you twirl up and down the metal over and over again. Poppy couldn’t imagine it—how Baryshnikov could stay in extended flight, how suspended he felt in time and space, how calm he seemed in the air, how empty his mind looked through the smoothness of his face and how he could land so noiseless and quiet, but a pretty quiet, like sleeping in a field of daisies in the sun where time doesn’t matter. She’d never forget that moment, sitting on that dirty studio floor watching that small TV/VCR and remembering how fully she’d left that floor, how high up in space she was, twirling with that image of Baryshnikov.

She tried ballet once. Even though it was nothing compared to watching ballet men, and even though she knew she’d never be allowed to dance the way men got to. When she was 7, Poppy and Lola’s mother worked at the Montessori school for babies, so they got to hang out with the big kids next door. Every week Poppy and Lola took ballet, tap, and jazz at Dance Tree. They jazzed to Walk Like an Egyptian, complete with gold sequined headbands and anklets with red Egyptian outfits, they tapped to There’s No Business Like Show Business in barber shop hats with red satin ribbons on their tap shoes, Miss Michelle taking advantage of their matching bodies and faces by placing them front and center. Poppy didn’t remember getting to dance ballet on stage. After they turned 9, it was time to join a studio. Poppy’s father took one look at the studio prices and squirmed his face into a question mark.

Lola always hated it. And she had the louder voice. So it was, and Poppy and Lola no longer danced.

Poppy took a clean sheet of stationary from its packaging. She placed her thumb delicately on the little dancing men at the bottom, trailing it in a measured straight line across. She sighed. She could see Lola’s smirk already, from wherever it was she would, hopefully, open Poppy’s envelope. But Poppy couldn’t think about that. She had to write her from her own place, her own heart, her own truth. If there was any chance of getting Lola back, it was the only way this would work.

She began to address her letter to Lola in her mind, knowing she couldn’t waste her prized dancers on mistakes.

Poppy cleared her throat. She put her fingertips to her forehead, one hand meeting the other in an upside down v, and wiped her face downwards, as she did when she was overwhelmed with any kind of emotion. She ran both hands through her cropped hair. She circled both arms backwards and opened her chest. A gust of air from the a/c made contact with her bedroom door, which was slightly ajar, and slammed it shut. Poppy’s shoulders jumped slightly.

She rolled the stationary carefully through her bubble gum pink Smith-Corona, and deliberately hit each key, as though pressing each fingerprint in ink. 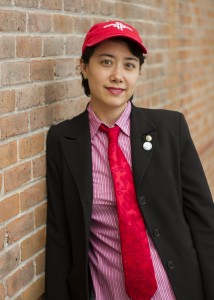 Addie Tsai is a scholar and writer interested in dance studies, psychoanalytic theory, creative writing, hybrid art forms, and literature of those that are marginalized, such as gender/queer literature, disability literature, and literature that addresses multiple intersections of otherness. Her poems and creative nonfiction have been previously published in journals such as NOON: A Journal of the Short Poem, American Letters and Commentary, Forklift, Ohio, The Denver Quarterly, The Collagist, The Volta and Post Road, among others. Addie Tsai’s manuscript of poems, and in its place—, has been a finalist in Four Way Books’ Larry Levis Prize and a semi-finalist in Tupelo Press’s Dorset Prize. She was co-conceiver for Dominic Walsh Dance Theater’s dance theater adaption of Victor Frankenstein, and narrative collaborator of DWDT’s production, Camille Claudel. Addie Tsai currently teaches Composition and Literature at Houston Community College, where she has coordinated a nationally-known reading series focusing on writers of color, and has taught creative writing classes on Personal Essay and Creative Nonfiction at Inprint and The Jung Center (in Houston). She received her Master of Fine Arts at Warren Wilson College in Poetry, and is currently a doctoral candidate at the Texas Woman’s University’s Ph.D. in Dance program. Visit her website at: www.addietsai.org.