some said you were the spitting image of evil

i sell the shadow to sustain the substance

as black woman i am untitled—nameless

my heart   a faint glow of neon wire

buzzing toward some shameless demise

i stand against walls looking nonchalant

flashbulbs mistake me for celebrity

i am installation art as negress

what parts of we ain’t for sale as woman?

is this body possible? or do i

root of all Eves(alternate take)

there: herself and the square root of herself

incubating just below the surface

her body: a panic of random hands

feet of motorcycles, tail of purple

feathers—a headdress of chaos and thorns

she teeters between celebrate and mourn

the left arm a trunk of flesh recently severed—

perhaps punishment for picking what felt

free and firm as a missing left breast

machete  is a motherfucker when

wielded by an angry god  or at least

that’s what the legend will have us believe 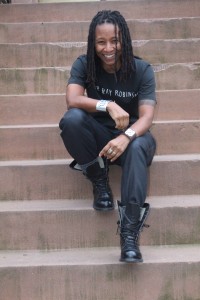 t’ai freedom ford is a New York City high school English teacher, and 2013 Pushcart Prize nominee. Her poetry has appeared or is forthcoming in Drunken Boat, Sinister Wisdom, No, Dear,  The African American Review, PLUCK!, Vinyl and others. t’ai lives and loves in Brooklyn, New York, but hangs out digitally at: shesaidword.com