Towards Freedom from Violence: Queer and Trans People of Color Activism in the U.S. – The Feminist Wire

Home / Activism / Towards Freedom from Violence: Queer and Trans People of Color Activism in the U.S.

Towards Freedom from Violence: Queer and Trans People of Color Activism in the U.S.

As a queer migrant who got asylum based on my sexuality, I often feel exiled from progressive environments in the United States. Rarely do I enter spaces where my multiple identities co-exist. Even more rare are progressive environments that celebrate what it means to be a queer migrant. LGBTQI activists of color in the U.S. often face a similar tension: we search for spaces where our lives matter. The organizing we are witnessing in Ferguson, Missouri today brings hope within it of a more intersectional analysis and response. As we wait for the grand jury decision on whether to indict the police officer in the shooting death of Mike Brown, day off or next day actions are being planned across the U.S. As a queer migrant I care about Mike Brown’s life and the lives of so many other Black and Brown youth killed by the police. I care about the lives of undocumented people in the U.S. and the lives of queer migrants because our lives matter. 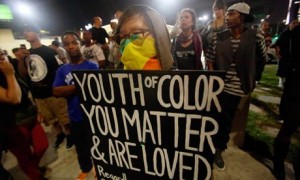 In the past months we’ve witnessed the strengthening of a vibrant movement against police violence, racism and white supremacy. #FergusonOctober is one of the most recent movement moments that has brought activists across the U.S. together to show the connections between institutionalized racism, state violence, and militarization of people of color communities in the U.S. As many other movements against criminalization in the U.S., Ferguson’s movement is also being led by queer and trans people of color who are drawing important links between racism, gender oppression, sexism, cissexism, queer and transphobia, and state violence.

Some years ago, when the mainstream “gay rights” movement started to push harder for marriage equality, radical LGBTQI organizations demanded that we took a deeper look at issues of violence that affect queer and trans communities, namely policing, criminalization, and struggle for economic justice. Activist scholar S. Lamble reminds us that “discrimination [is not a] “flaw” in the system, rather [it is] intrinsic to the system itself.” The killing of black and brown youth by police, violence against undocumented immigrants inside and outside detention centers and stop and frisk policies, are just a few examples of an ongoing legacy of state violence and they highlight the ways in which the current policing system is failing. Violence against queer and trans communities of color in the U.S. is also an example of such legacy of violence which makes queer and trans people cautious of the police and of the state’s claims to protect them. One of the most recent saddening examples of violence against queer and trans people of color is the murder of immigrant rights activist Zoraida “Ale” Reyes in Orange County, CA. Zoraida’s body was found on June 12th of this year. Her family, community, and friends gathered to celebrate her life and to express collective outrage. Her death, like Mike Brown’s death, triggered protests and continue to inspire others to stand up against violence. 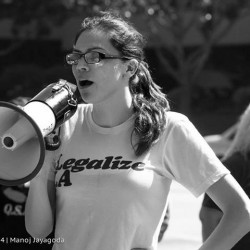 Community United Against Violence, a 35 year old LGBT community based organization, defines state violence as imprisonment, policing, and criminalization; institutionalized discrimination; the denial of basic human rights such as housing, healthcare, education, and employment; deportation, occupation, displacement, genocide, torture, and military attack. Queer members of Millennial Activists United (MAU) have named the difficulty of making space for multiple identities, such as being Black and queer, when standing for economic and racial justice. Nonetheless, these organizations have been courageous in naming these connections and remembering legacies of organizing as part of surviving. As Ashley Yates has previously stated, “in St. Louis you are either gay or you’re Black. Intersectionality is a word not yet recognized or practiced here. So as a queer person of color doing work that is centered on racial bias, it is difficult to hold space with people who tend to forget that we exist.” In another interview, she adds, “most of us were raised by parents that inherited the fruits of labor from the Civil Rights movement… We are the descendants of those who already fought for these freedoms and we will not let their sacrifices, blood, sweat and tears be swept away.”

The National Youth Council of the Gay-Straight Alliance network issued a statement on August 23rd calling all Gay-Straight Alliance clubs across the country to commit to working against the criminalization of young people. The statement collected 142 signatures and it states, “as young people leading Gay-Straight Alliance clubs across the country – including in St. Louis – [the murder of Mike Brown] did not come as a shock. We know what it is to be criminalized and we are outraged, but our outrage is not restricted to the Ferguson town limits or even the police force. [This] murder is one of many tragic expressions of a system that we fight to survive under every day. It is a system rooted in a historic pattern of racism, violence against the black community, as well as homophobia and transphobia… We do not only stand in solidarity with the community of Ferguson; we stand in active resistance…” These LGBTI local activists have made the point that criminalization is an LGBTI issue using hashtags such as #morethanmarriage #EducationisKey #Fergusonoctober and #GetYrRights.

The 2013 report “Moving Up, Fighting Back: Creating a Path to LGBTQ Youth Liberation” published by New York based organization FIERCE, found that the most critical issues impacting LGBTQ youth today are criminalization, policing, lack of housing, immigration restrictions and concerns of safety and violence, including bias violence, school-based violence, and intimate partner/sexual violence. As we know, queer and trans youth are more likely to be homeless, unemployed, bullied at school, harassed, and targeted.

According to the NYCLU, in 2011, NYC officers made 685,724 stops as part of the “stop-and-frisk” policy. Of that group, 605,328 people were determined not to have engaged in any unlawful behavior. LGBTQ youth members of Streetwise and Safe (SAS), a leadership building organization providing “know your rights with the police” trainings, shared their stop and frisk stories to show that LBT women of color and all queer youth of color are also part of the disproportionate number of people of color racially and gender profiled by the NYPD every year. SAS member Chris Bilal shares:

My friends and I were stopped, questioned, and searched in Marcus Garvey Park in Harlem — not on the pretense that we had weapons or contraband — but because we were three black gay men in a park. The fact that we were dancing to Beyoncé was presumably enough to give rise to reasonable suspicion that we were engaged in unlawful sexual activity.

Trans and queer organizations across the U.S. have highlighted the lived experiences of LGBTQI people of color and are the leading voices proposing alternatives to the current “in-justice system.” SAS is also a leading member of Communities for a Police Reform a community led campaign which has made huge strides to protect New Yorkers from the NYPD’s abuse of power.  #FergusonOctober has inspired many demonstrations, rallies, community gatherings, strategizing sessions, and a vibrant movement building energy across states.

Streetwise and Safe organized a #GetYrRights tweeter rally on National Coming Out Day (Oct 11th) to bring attention to the power of knowing your rights when interacting with the police as LGBTQ youth. Along other community organizations they also launched the official GetYrRights network website to amplify resources to empower youth and reduce the harms of interaction with law enforcement. In addition, this past week, activists called for a #BlackLivesMatter national week of action. BreakOUT! and the New Orleans Worker’s Center for Racial Justice organized a Children’s March for Human Rights on October 24th. BreakOUT! youth and the children of immigrant reconstruction workers marched together demanding that the New Orleans mayor put a stop to the collaboration between ICE and the New Orleans Police Department and the increase of race-based community raids and deportations. BreakOUT! also released their “We Deserve Better” report which highlights research by youth members about discriminatory policing practices affecting LGBTQ youth in New Orleans. Grassroots organizations such as Southerners on New Ground (SONG) coordinated #BlackLivesMatterEverywhere actions. On October 22nd, SONG members and other community organizations and activists blocked a busy highway in Atlanta, Georgia in honor of the 19th annual National Day of Protest Against Police Brutality.

Activists in Ferguson, Missouri marked the beginning of #FergusonOctober chanting Assata Shakur’s quote: “It is our duty to fight for our freedom. It is our duty to win. We must love each other and protect each other. We have nothing to lose but our chains.” October Ferguson has created movement ripples and LGBTQI organizations have helped amplify and lead these waves of change. These organizations are leading not just an intersectional anti-criminalization movement, but perhaps the only long-lasting solution to the legacy of systemic violence and its harmful effects that are so tangible today. 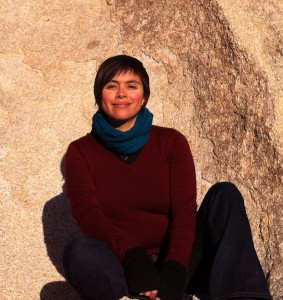 Mónica Enríquez-Enríquez is a Program Officer at the Astraea Lesbian Foundation for Justice where she coordinates the Arts and Cultural Activism, Anti-Criminalization and Freedom from Violence and Latin America and the Caribbean portfolios. Mónica is a queer Latina, born and raised in Colombia who migrated to the U.S. in 2001. Mónica is the Davis Putter Fund National Activist Scholarship Board Co-Chair and recently joined the board of FIERCE an LGBTQ youth of color New York based organization.

Related Items#BlackLives MatterEverywhere#FergusonOctoberAshley Yatesassata shakurAstraea Lesbian Foundation for JusticeCommunities for a Police ReformCommunity United Against ViolenceFergusonFIERCEinstitutionalized discriminationMike BrownMillennial Activists UnitedNational Youth Council of the Gay-Straight AllianceNYCLUqueerphobiaracismSoutherners on New GroundStreetwise and SafeThe National Youth Council of the Gay-Straight AlliancetransphobiaZoraida “Ale” Reyes
← Previous Story COLLEGE FEMINISMS: A Litany for Jada and Janay: In the Spirit of the Lorde
Next Story → Mother of the Movement: Remembering Bambara and the “African Bones in the Briny Deep”