Personal is Political: The Unbearable Hush of My Day Job – The Feminist Wire

Home / Bodies / Personal is Political: The Unbearable Hush of My Day Job

Personal is Political: The Unbearable Hush of My Day Job 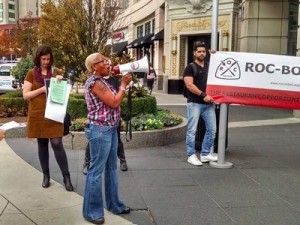 “Would you ever consider cheating on [your boyfriend] with your manager?”

As bartender and closing manager we were the last two left in the SoHo restaurant, counting out the register when I was completely blindsided by his proposition and could only think to walk away.

In the locker room I thought of plenty of retorts, as it happens with comebacks; they’re never around when the moment is ripe. But would I have said them if I’d developed them on the spot? No. I couldn’t have. I might have been treated differently: given less lucrative shifts, called off from work when I needed the money. I had to stay quiet. At least to him. As the bar manager, he was my direct supervisor.

At 24 I’ve been in the restaurant industry for nine years. From paying for the gas in my first car to supporting my move to NYC and transition into graduate school, my hospitality skills have proved time and again to be a positive method of survival.

I’ve worked for corporations and indie shops, glorified fast food and fine dining, behind the bar and on the floor, but there is an unfortunate thread that runs through these experiences: there is always sexual harassment.

We all know it happens. We talk about it in the locker rooms and outside of work: unwanted flirtation, touching when it isn’t necessary. It is what we call “an unfortunate given.”

At first the decision to stay silent about the manager’s comment was easy. How embarrassing would it be to repeat those words to my general manager? But the incident would not disappear with a roll off my back. I’d lost all respect for the bar manager and dreaded going to work.

I decided to tell our female manager what had happened, and things escalated quickly. Within the hour I was sat down with the general manager, and, to my surprise, the COO of the restaurant’s corporate offices came to speak to me that very night. “How nice,” I thought. “They care about me. They’re going to take care of this.” 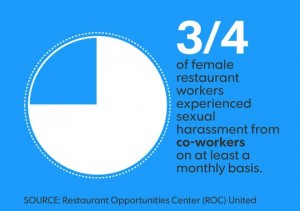 Though I declined the opportunity to speak face to face with my harasser, as I was afraid of being made to feel even more uncomfortable, the next day I was forced to sit down with him anyway. After this awkward talk, with the manager halfheartedly apologizing with, “I’m sorry you misunderstood my joke.” I felt as though he had not only gotten away with harassing me but had succeeded at blaming me for “misunderstanding.”

While the general manager and COO did seem genuinely disturbed by the bar manager’s request, the biggest take away, the reiterated message from each meeting was “don’t tell anyone.” “Try not to share this with your fellow team members.”

Now, I see why a huge company with six restaurants in New York City alone and many more around the country wouldn’t want this to escalate into a lawsuit. But what would happen if this issue became a discussion with the team? Maybe awareness? Maybe accountability? Maybe the same wouldn’t happen to the other employees? Well, that doesn’t seem so bad at all.

As I continued to work side by side with this man it became more and more apparent that other women also felt uncomfortable around him. Even with my mouth shut about my own ill experience, friends willingly offered their own feelings about the manager saying that they felt they needed to flirt with him to get a better section. One woman was told “as a pretty girl she should have more guests at her bar [than the males at another bar],” if she would only smile at the men coming through the door. Not a month after my complaint, the manager told hostesses, within my earshot, they could be let off early if they agreed to get a drink with him after his shift. Even the male workers complained about having smaller sections than the women when this manager was in charge of the floor plan.

One day, after returning from a summer trip, I was introduced to a new manager. When she misheard my name, my harasser chose to interject, “Be careful she has a history of being sensitive.”

Now I was being blamed again. Not only did I “misunderstand” him in the beginning, now I was being represented as “sensitive,” a common retaliation comment according to the 2012 ROCU report.

These restaurants allow us to feel that our complaints are simply the result of some inextinguishable feminine rant inside of us fueled by manic estrogen. And, you know what? I do agree that women are always complaining. Though isn’t the real issue here that there is always something to complain about and no one there to truly listen, only quiet down?

While the staggering statistics on reported sexual harassment cases revealed by the ROCU report of 2012 may have seemed high, the reality is that those instances reported were only the tip of the iceberg. An updated ROCU report, published in October this year, states that 90% of female restaurant workers experience sexual harassment and 66% experience that harassment at the hands of their management. With over 277,000 people employed by restaurants as of June 2014 and over half of them female, that’s a whole lot of stories gone untold. 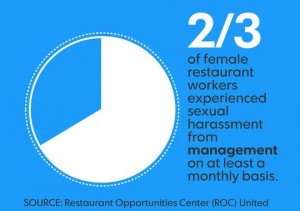 If I didn’t say anything I would simply be a part of the quieted 90%. So, I told the higher ups about my harasser’s advances on other women and his teasing me for being sensitive, as I was promised a no tolerance policy after the original incident. Was the manager suspended until the investigation was complete? Transferred to a different store so that I could continue to work comfortably in the meantime? No. In fact, only days later, after being told they would avoid me having to come in contact with him until the case was handled, my harasser called me to speak about the night.

I felt lower than low to hear his voice on the other end of the line. I brimmed on the edge of tears feeling that not only had he gotten away with harassment again, but that he always would. I resigned two days later, stopping only to explain how deeply disrespected I felt. As of now, two months after my resignation, the manager still has his job.

You see, the problem isn’t just that restaurant managers harass their female employees or even that women are too afraid to say anything about it. It extends beyond to the way these cases are handled even when one attempts to follow all the appropriate steps. I reported the incident almost immediately and followed up when my concerns weren’t being met.

Still I was blamed by my harasser, promised limited interaction but then denied that promise, and all the while told to stay quiet. Keep it down. Hush up.

Within the months that I experienced this harassment, an employee of almost two years was fired because he used his cell phone on the floor one too many times. It is a common practice in the restaurant industry: to be made an example of. To make public the shame of one’s wrongdoing. To make us think twice the next time we want to check our phones. But what if instead my harasser was the one made an example of? What if instead he was punished or fired for his actions instead of protected by avoiding the issue? Then maybe, finally the relentless cycle would finally shift. Then maybe, finally the high rates of female harassment in the restaurant industry would become lower and lower rather than higher and higher. Just like if a blind eye was shown to cell phone use on the floor, shushing the issue of harassment only exacerbates the action. If we can stop cell phone usage in one restaurant at the cost of an employee, could we not do the same with harassment? Should we not do the same?

With this man still managing the restaurant’s team, women will continue to feel uncomfortable at work; men will struggle to make the same amount of money as the women. No one wins. And me? Well, I guess this time I was the example worth losing. 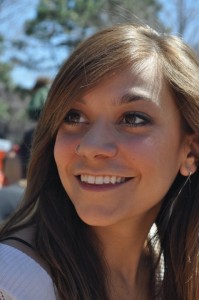 Samantha LaBue is a fiction writer and journalist working in the restaurant industry in order to support her graduate education. She received her Bachelor’s Degree from Colorado College in English: Fiction Writing in 2012, and will begin working toward her MFA in Fiction Writing with the Vermont College of Fine Arts low-residency program in December.