By Guest Contributor on November 7, 2014

“we who believe in freedom cannot rest”

I was in St. Louis, Missouri recently for #FergusonOctober, a call “to build momentum for a nationwide movement against police violence.” While there, I saw so many persons and organizations fed up with anti-black police terror. In this beautiful sea of black folks, white folks, and nonwhite allies, it was undeniably clear that black women were by far the largest represented group in the protests, marches, and events organized by the young folks in Ferguson and St. Louis. All of the people who made it to St. Louis for “the weekend of resistance” stood together demanding justice for Michael Brown, Jr., Vonderrit Myers, and so many others slain at the hands of police officers, security guards, and white vigilantes. In the midst of the Malcolm X’s, Robert F. Williams’s, and Martin Luther King’s, I saw far more young folks, community members, and non-celebrities, and so many black women whose narratives seemed to align with that of Fannie Lou Hamer. 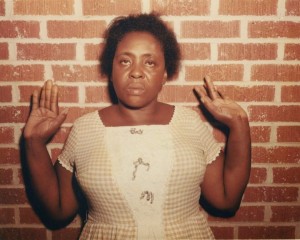 In the 1960s, Hamer, a Mississippi sharecropper, anti-poverty advocate, and black women’s activist committed her life to serving the undeserved, the downtrodden, and those whom the state had stripped of voice, sustainable living conditions, and the ability to live unbothered by the undying pressures of a post-enslavement, white supremacist society. Fannie Lou Hamer had endured the racialized, classed, gendered, and sexualized violences of anti-blackness. In fact, in 1961, a white doctor, without her knowledge or consent, sterilized her as part of a larger state sanctioned initiative to reduce the number of poor blacks in Mississippi and across the nation. These ruthless attacks on her body would unfortunately continue throughout her life’s course.

In June of 1963, while traveling through Winona, Mississippi on a bus ride from a Charleston, South Carolina literacy workshop, Hamer and a group of other black activists, from SNCC, were falsely charged and arrested by police.

That night they were all beaten almost to death. Fannie Lou was sexually assaulted, her kidneys were damaged, and her body left exposed. As the historian Chana Kai Lee notes,

Still, a modest and dignified middle-aged woman, Hamer fought to preserve some respectability through the horror and disgrace by holding down her dress. ‘Quite naturally, being beaten like that, my clothes come up, and I tried to pull them down, you know, It was just pitiful,’ she reflected. Her brutal assailants allowed her no such momentary release from shame, as ‘one of the other white fellows just taken my clothes and just snatched them up,’ said Hamer. As Perkins, the other officers, and the male prisoners continued assaulting Hamer, she continued screaming and writhing in pain, ‘working my feet cause I couldn’t help it,’ she remembered. The more she screamed, the harder they struck (Lee, 52).

I met a Fannie Lou Hamer this week, except she was younger and she’s from Ferguson.

While in downtown St. Louis at the Saturday, October 11th #FergusonOctober march and rally, a t-shirt caught my eye in the midst of the growing crowd. It read: “I Was Attacked & Arrested by Ferguson PD because I Exercised my 1st Amendment Right” (on front) and “#FergusonOctober 2014 Mother of 3” (on back). 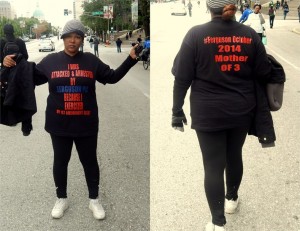 A Black woman was wearing that t-shirt. I couldn’t just admire her shirt from afar; I had to speak to her about the story behind it. I ran over to her as quickly as I could so that I wouldn’t lose sight of her. I told her I liked her shirt and asked if I could take her picture. In the process, she told me that her name was Francesca Griffin and on September 25, 2014, during an exchange outside of the Ferguson Police Department between residents and the police chief, Thomas Jackson, she was shoved, brutally assaulted, and unfairly arrested, all while her body was exposed to the sexualized gazes of those white male police officers. As she tried to pull her shirt down, fix her clothes, and guard herself from any further encroachments of her body, they continued to throw her to the ground. Her recounting of this incident reminded me of Fannie Lou’s testimony before the Credentials Committee of the Democratic National Convention in Atlantic City on August 24, 1964, in which Ms. Hamer stated, “I pulled my dress down and he [a police officer] pulled my dress back up.”

Francesca told me to search for the video of her assault online because she knew that it had been recorded and posted on YouTube. After a few keyword searches on Google and YouTube, I found the video posted by Disclosure Newszine. Beginning at 12:00 and ending at roughly 13:15, you can see how more than three officers accosted Francesca, her stomach area was left exposed, and how her pleas for help and answers were ignored.

Was any of this really necessary?

Reflecting on this traumatic experience, Francesca explained that there were parts of her assault that the video did not capture. She said police continued to push, beat, and kick her, all while she was hog-tied and then carried into a police cell. Francesca was treated with far less dignity and respect given to pigs. They treated Ms. Griffin like an animal, as police and everybody else have done to black women for centuries. Sociologist and Black feminist scholar Patricia Hill-Collins noted in her seminal work, Black Feminist Thought, that in 1878 an anthropologist equated an African woman to an animal:

She had a way of pouting her lips exactly as we have seen in the orangutan. Her movements had something abrupt and fantastical about them, reminding one of those of the ape. Her ear was like that of many apes…These are animal characters. I have never seen a human head more like an ape than that of this woman (Halpin 1989, 287 quoted in Hill-Collins 2002, 140).

Francesca Griffin’s encounters with police reveal the ways in which black women are still equated to animals in the eyes of the state. Her body and her humanity were left exposed for surveillance, infringement, and fantasy fulfillment. Those officers ignored her pleas for relief, just as many slave owners, Jim Crowists, and police officers have historically ignored the anti-rape cries of black women and girls. Ms. Griffin’s pained story, like Fannie Lou Hamer’s, shows us how “A Black Woman’s Body Was Never Hers Alone.” 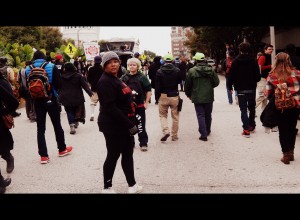 Even with all the hurt and pain associated with mobilizing against police terror, Francesca made her way back out into the streets, putting her body on the frontlines, and demanding justice for black women, men, and children. She was marching for Mike Brown and Vonderitt Myers, but she was also marching for herself and her children, the same ones who were harassed and fingerprinted by police in Canfield following Mike Brown’s death. Francesca just wants her family and her community to live carefree of the traumas of white racial supremacy. She wants her children to be able to play outside, jump rope, and use chalk on the sidewalks of Ferguson without fearing for their lives. She wants the women in her community to be able to exist without being sexually harassed by the men and police in Ferguson.

I believe that Francesca Griffin, a Ferguson Fannie Lou, just wants to be free. 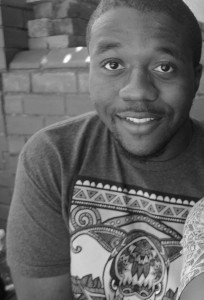 Ahmad Greene-Hayes is a freelance writer, a Mellon Mays Undergraduate Fellow, and a scholar-activist working with Black Lives Matter and a number of other community networks against police brutality, sexualized violence and state sanctioned terror. His writings have been featured previously on The Feminist Wire, New Black Man, and Kaleidoscopes. He is also the lead organizer of the weekly Twitter chat-up #FergusonFridays. Follow him on Twitter @_BrothaG.

Related Items#FergusonFridays#FergusonOctoberFannie Lou HamerFrancesca GriffinMichael BrownVonderrit Myers
← Previous Story The Religion of My Rape
Next Story → Facebook and Apple Want Your Unborn! Or, Why Corporations Should Keep Their Hands Off Employees’ Ovaries