Op-Ed: Meme what you say, say what you meme: What kind of Asian woman am I? A good one gone bad – The Feminist Wire

Home / Culture / Op-Ed: Meme what you say, say what you meme: What kind of Asian woman am I? A good one gone bad

Op-Ed: Meme what you say, say what you meme: What kind of Asian woman am I? A good one gone bad

As I was sitting through the second excruciating hour of my first Tinder date, I couldn’t help thinking: How did I end up here, sitting across a white man who wouldn’t stop mansplaining about the difference between Japanese and Korean culture? More important, how had I so internalized social norms about how I should be acting that I couldn’t bring myself to up and leave?

There is no shortage of examples of how dating while female and Asian can be hazardous. The Buzzfeed list of “Shit an Asian American Feminist Will Tell you on Tinder,” shows what happens when an Asian-American woman decides to engage with men who say inappropriate things, including gems like “Never had Asian.” Paula Lee Young details at Salon how “yellow fever,” the fetishizing of Asian females, is one the rise, especially on dating sites where we are apparently the most desirable. The classification is not as self-affirming as it may seem because it still sees us as a “thing” not a person. A YouTube parody video that explores what passes as flirtatious conversation between a white man and an Asian-American women in, ”What kind of Asian are you?” has been making the rounds on my social media sites again.

Asian-American women are not the only ethnic minority who suffer from being fetishized. I’m sure the vast majority of women of color reading this can tick off a dozen examples of being fetishized. I’ve had to deal with it my whole life, but I think of myself as outspoken, smart and strong enough I immediately repel fetishists. But, I started to question myself as I could physically not bring myself to leave the table and be rude to the man across the table who had told me all about his love of Asia and Asian women. Was it cultural norms that made me paralyzed? Was it societal expectations of how proper women behave? Am I totally a fraud?

Roxane Gay explores some of these ideas in her new book of essays, Bad Feminist. The title essay talks about how Gay is a “bad feminist” because she doesn’t conform to what others see as what a feminist should be. Gay explores notions of feminism and the right and wrong way to be a woman: “Good women are modest, chaste, pious, submissive. Women who don’t adhere to these standards are the fallen, the undesirable. They are bad women.”

Simply put, a good woman sits politely and listens intently. Good women don’t up and leave, which, of course, negates the fact that women are complex human beings and the multidimensional nature of being Asian-American and so much more is a part of that.

My date tried to impress me through a recitation of his accomplishments– education, work, knowledge of Asian cultures. But, none of that mattered because he would never see me as more than my skin color, the shape of my eyes, the color of my hair. What kind of Asian am I? To paraphrase Roxane Gay, a “bad” one in all my complexity — the very best kind. 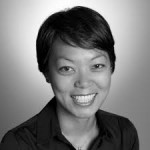 J. Mijin Cha is an Associate Director at PolicyLink and a participant of The OpEd Project Global Policy Solutions Greenhouse

Related ItemsAsian American womenexotificationPaula Lee YoungRoxane gayShit an Asian American Feminist Will Tell you on Tinder”tinder
← Previous Story Baby Gammy and the Problem of Women’s Labor
Next Story → Personal is Political: The Other Girl: How I Found Feminism When My Mother Went to Prison