Elementary Feminisms: Anthem for a New Breed – The Feminist Wire

The word “feminist” is loaded and can carry bad connotations. The word “feminist,” often generates two types of thoughts; (1) social, economic, and political equality of the sexes; or (2) angry, bra burning, man hating, activists. Conservative understandings of feminism suggest that feminists are “crazy” girls being too ambitious, wanting too much, and reaching too far out of their position in life. Recently, there has been a new wave, if you will, of feminist ideas emerging from my generation.

My generation, the “Millennials,” is enormously impacted and influenced by what their friends and celebrities listen to, watch, tweet about, and purchase. Most of the time, people’s money and energy are spent on how to benefit from how you are views by peers. Many of my female peers will alter their beliefs and likes to fit what a male deems valuable and desirable. These girls lie about themselves and inhibit their future possibilities in order to attract a man. Why are girls often brought up to aspire to be an accessory to a man’s life, and live in the shadows of a man’s success? 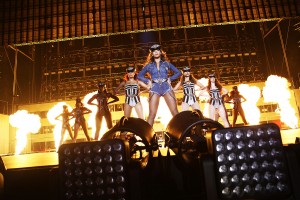 This question has been brought to “our” attention by famous pop star, Beyoncé, in her recent self-titled album. Beyoncé Knowles’ album works to show that sexism is still prevalent in today’s world and that it should not be expected nor ignored by my generation. Beyoncé has a great influence on young girls and women in U.S. society, and over the past few months in particular she has been the center of popular debates about feminism. In fact, Time magazine states “with her new album, Beyoncé has become the embodiment of modern feminism for a generation that has been reluctant to claim the word.”

Since the early 2000s many women have found inspiration in Beyoncé’s work by either seeing their own characteristics in her or aspiring to embody her persona of an independent woman. With her twelve-year cultural podium, she has the resources to project ideas that need to have attention brought to them. I greatly appreciate her choice to discuss feminism.

Beyoncé raises the question of feminist explicitly in her song “Flawless.” Flawless features an excerpt from Chimamanda Ngozi Adichie’s TED Talk titled “We Should All Be Feminist.” Adichie argues,

“We teach girls to shrink themselves to make themselves smaller. We say to girls, ‘you can have ambition, but not too much. You should aim to be successful, but not too successful; otherwise you will threaten the man.’ Because I am female, I am expected to aspire to marriage. I am expected to make my life choices always keeping in mind that marriage is the most important. Now marriage can be a source of joy and love and mutual support. But why do we teach girls to aspire to marriage and we don’t teach boys the same?”

Beyoncé’s album challenges the stereotypes placed upon women by addressing issues and topics such as sexuality, marriage, motherhood, and physical appearance. She crushes the negative archetypes of women with her songs: “Partition,” “Blow,” “Mine,” “Pretty Hurts,” and “Flawless.” The topics of these songs may seem taboo to some.  Who else sings about post-partum depression after having her first child and doubts with her husband, or oral sex and skittles openly in the same song? By doing this, I believe Beyoncé breaks down barriers on what women are “allowed” to speak about publically. Her songs, and particularly her decision to challenge women’s roles and feminism, are important for my generation to hear.   We are the leaders for future generations and, perhaps, we can be the generation that ends sexism. We respect and admire her powerful work. 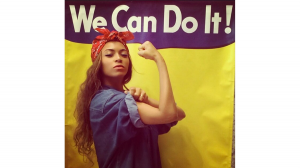 I know ideas of equality or challenging stereotypes are not new and have not been created by Beyoncé. However, Beyoncé is in the public eye and has the ability to affect a large audience who before, may not have engaged with these issues. Her political commitment to convey feminist ideas to a younger generation is revolutionary because we are told daily to fit the needs of men, to behave in the patriarchal structure. When Beyoncé made feminism and sexism explicit in her songs, she encouraged many young girls and women to look into the injustices of today’s world.  She challenged us to do our research about sexism and to further ourselves in ways that can change knowledge and politics.

Victoria Schulte will be a freshman at the University of Missouri, Columbia and plans to major in biology. Victoria has a passion for writing and current social issues in the world. Along with writing, she is interested in painting, drawing, and music.  However, she is sure that her leisurely muses will all change once the hectic life of college begins this fall.

Related ItemsBeyonce and feminismCultureentertainmentfeminismGenderPatriarchysexismstereotypesYouth
← Previous Story Getting on Up: The Cult of the Charismatic Black Man
Next Story → Op-Ed: Why We Need Critical Ethnic Studies in Arizona (and Everywhere Else)