Getting on Up: The Cult of the Charismatic Black Man – The Feminist Wire

Home / Black Girls / Getting on Up: The Cult of the Charismatic Black Man

Getting on Up: The Cult of the Charismatic Black Man 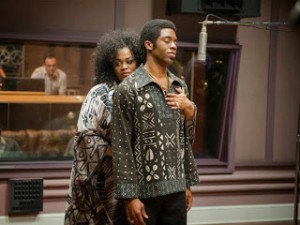 Charismatic black men slapping black women around are funny.  This was the takeaway conveyed by some audience members at a screening I attended of the new James Brown biopic Get On Up at a predominantly black theater in Los Angeles. Largely sidestepping the chronic abuse Brown inflicted on multiple spouses (Brown served jail time for domestic violence), the film all but deifies him as an uncompromising god-fearing, rugged individualist and red-blooded race man who inspired all black people to “get on up.” Yet during the film, a group of male viewers howled to the rafters at a gut-wrenching scene in which actor Chadwick Boseman’s Brown sends wife Deirdre Jenkins—played by the luminous Jill Scott—crashing into a table. Later in the film we see Jenkins cowering after being verbally abused by Brown in an exchange which disturbingly segues into her initiating sexual foreplay.

The film’s problematic juxtaposition of black male hero worship with intimate partner violence brought to mind the recent gyrations of ESPN commentator Stephen A. Smith and other prominent black male media figures who’ve mouthed off about black women’s alleged complicity in their own abuse. Last week, Smith elicited controversy when he criticized NFL player Ray Rice’s abuse of his spouse then proceeded to admonish women about “provoking” abuse. Smith received a one-week suspension for his comments but the message was unequivocal—women need to self-police to make sure they’re not inciting violence with their out of control mouths and “bitchy” emasculating attitudes.

Bashing black women for being complicit in their own abuse has always been an insidiously popular past-time but in the age of 24/7 media it’s high sport. Recently Grio writer Boyce Watkins and comedian D.L. Hughley were called out by black women activists after they made similar comments as Smith’s. Both half-stepped on their stated abhorrence of violence against women by trotting out racist, sexist, hetero-normative stereotypes about gold-digging hypersexual black women’s penchant for “provoking” or tempting brothers into committing rape and intimate partner violence. Hughley, like Smith, issued a now pro forma apology after writer Kirsten West Savali initiated a widely circulated petition condemning his remarks.

But a deeper and less explored question is how this plays out for black boys in an era in which they’re regularly bombarded with violent demeaning images of black women and girls in social media, video games, film and TV. How do feminist/womanist educators, activists and organizers work with boys of color around anti-violence, gender roles, and sexuality? One of the first steps is highlighting how violence against women of color pervades every social institution. In our work with high school students in the Women’s Leadership Project we talk about structural oppression in organized religion, specifically how the Bible establishes misogynist double standards for women. Living in highly religious communities, what do youth of color see in their everyday experience that tells them it’s ok to denigrate cis and trans women? Talking candidly about the way religion socializes, we unpack how the elevation of charismatic heterosexual men in traditional Black Church leadership prescribes and limits women’s roles. Bad fallen women are hypersexual, loud, and indiscreet; mainstream America’s template for black femininity. Good straight Christian women submit to their men, mind their families and pledge undying, obsessive love for Jesus. Because both secular and religious culture deems female sexuality impure and in need of containment men always have a proprietary right to women’s bodies. As a result, black boys are socialized to believe that “checking” an “out of control” black woman or girl is practically their birthright.

I was reminded of this yet again when I passed by a young black boy with the words “Bitch Please” emblazoned in bold letters on his shirt on my way to school. Laying down the silencing epithet “Bitch please” becomes part of their easy “canon” of male performance and male privilege in classrooms, streets, and on social media.

Anti-sexist work with black boys in K-12 classrooms must begin with these kinds of conversations. It is telling that the Obama administration’s My Brother’s Keeper initiative does not emphasize the need for anti-sexist and anti-heterosexist best practices in K-12 education. Over the past several months, Kimberle Crenshaw’s African American Policy Institute and community activists across the nation have pushed back against this omission. Far too often, “rites of passage” violence prevention programs and initiatives for boys omit engagement with the role institutionalized sexism, misogyny, heterosexism, homophobia, and transphobia play in the lives and attitudes of boys of color. Far too often they bury the code of silence and complicity that exists among men about violence against women in a barrage of platitudes about “respecting” women and treating them like “queens.” Fortunately, there are rising black male feminist and womanist voices in journalism, education, community organizing and social media who challenge these regimes of violence and invisibility in their work (Mark Anthony Neal, Kevin Powell, Darnell Moore, and Byron Hurt come to mind).

As I wrote in this spring’s statement “Black Men Listening to Our Sisters,” through the holocaust of slavery and racial apartheid, black men have never been told by black women that their dehumanization was normal, natural, and “just the way shit is.” Yet, even when it was at their expense, black women have always been expected to uncritically support black men’s self-determination. This double standard endangers black lives.

Sikivu Hutchinson is founder of the Women’s Leadership Project and the author of Godless Americana: Race and Religious Rebels, Moral Combat: Black Atheists, Gender Politics, and the Values Wars and the forthcoming White Nights, Black Paradise, a novel based on Peoples Temple and the Jonestown Massacre.