A Statement on the Hobby Lobby Ruling – The Feminist Wire

Home / Bodies / A Statement on the Hobby Lobby Ruling

A Statement on the Hobby Lobby Ruling

The Feminist Wire finds the Supreme Court ruling in Burwell v. Hobby Lobby to be a gross violation of women’s fundamental freedoms. SCOTUS has determined, in a narrow majority of 5-4, that a corporation has greater legal rights than women. In doing so, it has overlooked scientific misconceptions of the Hobby Lobby family – including the false belief that contraception is abortion. 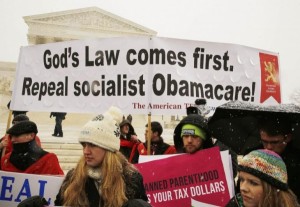 On the heels of the Court’s buffer zone ruling, the Hobby Lobby ruling signifies a frightening expansion of corporate personhood alongside a collapse of the separation of church and state. Tantamount to sex/gender discrimination in which women become second-class citizens, the ruling means that women of reproductive age with limited means will be unable to secure birth control. Young women, women of color, and poor women will be most affected.

SCOTUS is out of step with American lives. Nearly 90% of women who have ever had sexual intercourse use some form of contraception. According to the Feminist Majority Foundation, approximately 14% of women use contraceptives to treat endometriosis, ovarian cysts, and/or severe cramps. Contraception is vital to women’s health and livelihood, and to deny it is an act of reproductive injustice. Unintended pregnancies do little to reduce abortion rates – a stated (but specious) goal of the Right.

At TFW, we see this ruling for what it is: a cynical, misogynist, and deeply troubling attempt to derail the Affordable Care Act. Here we have five male Supreme Court justices siding against science and the fundamental principles of our nation and with misogyny, anti-science, and evangelicalism. This case is not about “religious liberty,” as proponents of Hobby Lobby argued. Rather, it is about religious discrimination; using God and the bible to return women to their “rightful” place as chattel – pregnant and unequal.

This is simply unacceptable. We invite you to stand with TFW, and with women, against this latest erosion of reproductive justice. We find it astonishing that in the 21st century we still need to affirm that women are people.