In Solidarity with Egyptian Feminists – The Feminist Wire

In Solidarity with Egyptian Feminists

On Saturday (June 21, 2014), Yara Sallam, featured in TFW last year as a Feminist We Love, was arrested by Egyptian authorities while participating in a peaceful demonstration calling for the repeal of the Protest and Public Assembly Law (Law 107), which gives officials the discretion to ban any protest without justification. The law also allows police officers to forcibly disperse any protest, and sets heavy prison sentences for peaceful protest and expression.

Yara was arrested along with six other women: Sanaa Seif, Hanan Mustafa Mohamed, Salwa Mihriz, Samar Ibrahim, Nahid Sherif (known as Nahid Bebo), Fikreya Mohamed (known as Rania El-Sheikh), and 15 other activists. They are expected to appear in Court on June 28.

On June 24, the women human rights defenders were suddenly transferred from the Second Tagamo Police Station to the infamous Qanater prison on the outskirts of Cairo, without explanation. Their male counterparts were transferred to Tora prison south of Cairo. 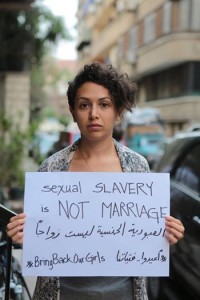 Feminists and activists around the world have joined efforts to demand the immediate and unconditional release of the 22 as well as all political prisoners.

In our interview with her, Yara Sallam said this: “Solidarity is not only important in terms of having a collective feeling of support that we are all fighting for the same cause, to end patriarchy, but also because we all know different tools and have different skills. What African feminists, and other feminists across the globe, can do is to pressure the Egyptian government (through sending urgent appeals, hold protests or other forms of pressure) to let them know that there are other feminists watching out for their sisters and supporting them. Another important aspect is that we all need to learn from each other, I believe that we in Egypt have a lot to learn from our African sisters, and also from the experience of other feminists, like in Latin America, about tools they used, and success and failure stories.”

The Feminist Wire stands in solidarity with our sisters in Egypt. #FreeYara #NoProtestLaw