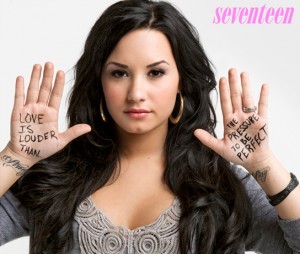 Demi Lovato, the actress and singer, has been open about her struggle with an eating disorder since her 2010 emergence from a stint in rehab. She has become something of an activist around the issue.  Despite her efforts to use her celebrity to change perception, she still gets called out on her weight, which is finally in a healthy range. The most recent salvo occurred last week when on Twitter a hater called her “fatty.” Lovato is no stranger to being fat-shamed. She took the high road in her response, tweeting, “Dear Haters, you don’t have to like me cause I love you. Everyone’s equal, everyone has a soul, and everyone deserves to be loved.”

The attack on Lovato is a somewhat gentle example of the endless stream of hateful social media remarks aimed at the weight of both celebrities and “ordinary” folks. I’ve found that non-stop internet fat-shaming has a noxious effect on those with eating disorders, even when the venom is not directed at them.

For 29 years, I have been a Licensed Professional Counselor specializing in eating disorders; for the last 14, I have been the director of an outpatient treatment program. During this time, the increasing importance of social media has made my job and my clients’ recovery efforts exponentially harder.

I don’t particularly like the term fat-shaming because it sounds so negative, but it describes hateful behavior. The term is widely used by the eating disorder community to describe behavior that labels those perceived as overweight as unmotivated, unsuccessful, or impulsive.

Social media makes negative body image comments more potent because it is pervasive and anonymous, which makes people much more comfortable being vicious. When I first started seeing clients with eating disorders, magazines, movies, and television provided most of the triggers for disordered eating (though they are not the causes). But these media didn’t have the reach of Facebook and Twitter – these two environments, along with others less well known, have become powerful mainstream drivers of eating disorders.

Eating disorders are extraordinarily complicated illnesses that make people hyper-responsive to their own beliefs about weight as well as what they perceive in the culture. Many young women suffering from disordered eating are fascinated with the lives of celebrities, especially young women like themselves. When celebrities are called out on their weight, others who struggle with weight and body image issues often also perceive harm.

Another sad thing about fat-shaming is that it doesn’t work to change behavior in positive ways. Hundreds of clients have told me how they used binge eating behavior to cope with criticism about weight. They end up consuming more, rather than less food, as if to say “I’m in control of my weight.”  Research shows fat-shaming actually increases the risk of becoming or staying obese.

Like Lovato, others have used social media to fight back. For example, blogger Lindsay Bottos, a thin 21-year old art student in Baltimore, received hundreds of cruel comments about the selfies she posted on Tumblr. One hater commented, “Ew, eat something seriously.” Bottos responded by creating an online art project that superimposed the nasty comments over her own photos, a way of taking control of the commentary. The art project, Anonymous, went viral, with over 110,000 views and garnering her 20,000 new followers.

Individual responses like Lovato’s and Botto’s provide voices helping to change the conversation and build that armor. So does the work of organizations like the National Association to Advance Fat Acceptance and others who use social media (along with other means) to build community and foster new attitudes.

Another choice, particularly for those coping with eating disorders, is simply to avoid social media or use it more skillfully. Many of my clients decide on their own to limit their exposure to Facebook or Twitter, at least temporarily.  Hearing fewer negative messages helps them identify and change the beliefs that led to their disordered eating. As they change those beliefs, they slowly stop taking fat-shaming personally.

Demi Lovato has said that recovery never takes a day off. She’s right – but we can all support those working toward recovery and work to change the culture ourselves. Refraining from and calling out fat-shaming are steps compassionate people can take in their social media lives. Let our voices join Lovato’s in a loving celebration of healthy body-image.

Annetta Ramsay, Ph.D., is a nationally certified and licensed professional counselor who has specialized in the treatment of eating disorders for 29 years. She directs the Chrysalis Treatment Program in Denton, Texas. This piece was written in association with the Op-Ed Project’s Public Voices Fellowship at Texas Woman’s University.