Personal is Political: On Misconceived Toxicity, Malice and Failures – The Feminist Wire

Personal is Political: On Misconceived Toxicity, Malice and Failures

TFW Disclaimer: Some names of individuals and organizations have been changed or eliminated in order to focus on the saliency of Fakhra’s testimony. These changes have been marked with an asterisk (*) at first mention. 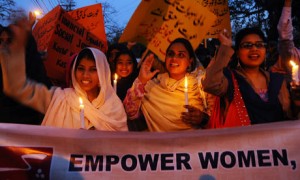 During the last week of February, I had the opportunity to meet Pakistani feminist activist and IT genius Malala Riaz* at the Karachi Literature Festival. Before meeting personally, Malala and I had been interacting online and over the phone since late 2012. The occasion of our meeting was serious. I had inadvertently reported rape. In 2013, I was falsely accused of defaming a man I barely knew, the rapist’s lawyer.

Malala and I didn’t discuss anything like that in Karachi. I was laden with autographed books, and had that “don’t-even-think-about-it” look on my face. She read that very well, and was courteous enough not to “ask” what “I had decided.” I broke the ice about my book and how excited I was to finish writing it. On the last day of the festival, we went to hear Zia Mohyuddin narrate the story of an Indian courtesan, her marriage to the rich Gora sahib (white man), and her tragic end that left her alone in her misery, suffering with her borrowed riches. Despite Mohyuddin’s eloquent storytelling that filled the warm air, the silence between Malala and me won to a nauseating extreme. We didn’t say a word to each other, but exchanged momentary glances that meant more than words, in a disturbing way. 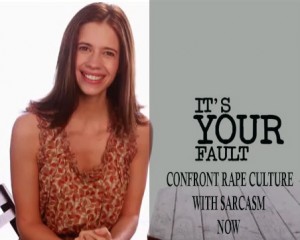 There had also been a rather disturbing silence after I noticed Ada Durrani* standing right next to Malala. Ada was a good friend of the rapist and long-time business partner at some point, and I wasn’t exactly thrilled to see her. In 2012, she was one of the prominent “Pakistani IT activists” behind a small-scale national survey on “rape” that was “apparently” completed “only by men” and circulated widely on Twitter. The survey, which I am now unable to locate, indicated that women are more likely to be raped because of what “they wear,” suggesting that it is essentially the victim’s fault when rape happens. Through Malala, I learned that Ada had been struggling with cancer for the last two years, which made me forget asking about her role in that dreadful survey. I had sent a Tweet inquiring about the gender ratio of the survey sample, but never received a reply.

I was fairly convinced that I was trapped in rape culture. I was discouraged from taking a stance against it, because the rapist was a prominent figure in the Pakistani IT industry. I had lost my job in those days, and was emotionally unstable. The feminists who “did” approach me to “help” often patronized my financial status. For instance, one of them nicknamed me “bloodsucker,” even though I had helped her in retrieving her long-due salary from my previous employer. One of them had also declined to offer me a job. 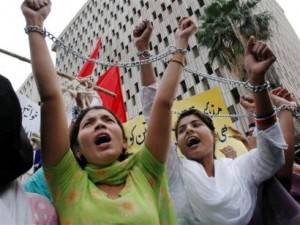 In January 2013, as an act of solidarity in the women’s collective that was formed to lodge a complaint against the rapist, I shared my testimony of rape with the all-women Board of Directors of the Association of Progressive Communications (APC), the rapist’s employers, and co-founders of his organization. Under the guise of a non-existent organization, the rapist had gotten his closest friend to sponsor our group Drag It to the Top, among others from Pakistan, for an IT workshop in Karachi in April 2012. It was only after receiving the certificate of participation that I discovered that this sponsor was one of the funding partners of that workshop. I was tricked into taking a favour from the rapist’s organization, and nearly fell with nausea and helplessness trying to undo the trickery.

Moreover, sharing that testimony with APC exacerbated my frustrations with the feminist communities further because no other feminist from that women’s collective who had fairly longer histories with the rapist spoke up. I was all alone. There were several attempts from people in power to convince me to go public and expose the rapist. However, I was largely unsupported and ignored by the LGBT community because, unlike most of them, I was the only one out in the open. The assumption, then, was that their public support for me could have endangered their security. Additionally, the feminists trying to convince me to go public were financially secure, and had a lot of social, moral and legal support, and in some cases, support from the government. It was only recently that I learnt from Malala that Ada followed suit and gave her testimony against the rapist, as well. Malala’s exact words were, “Ada broke partnership because of the situation and harassment, and she had been smeared in every international circle because of that bastard.”

I really didn’t mean to participate in an act of solidarity with other women who had past and current relationships with the man who raped me. I am a “gay” Pakistani single woman who has a “history” of relationships with men. I’ve experienced scary episodes of “homophobic stalking” and “harassment,” things I’ve dealt with primarily on my own. I don’t know why I am expected to support those oppressed Pakistani women who can’t or won’t take a stand on the violation of their own rights to dignity and bodily integrity. After all, it did take a “decade” for a political entity and bold author like Dr. Fouzia Saeed to do it. I wonder why they didn’t approach her to share their experiences. I wonder why the violation of queer women’s rights seem to function as the more “juicy” story. My friend and legal scholar, Leah Thomas*, reiterated those feminists are not really haranguing me to go public in order to “save me.” She thinks they are essentially cowering behind me because no one else could or would do what I did. 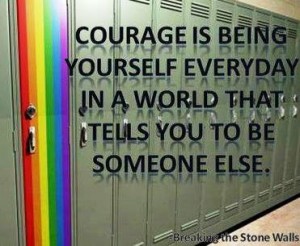 People who call themselves my friend often say I’m an easy target, because people know I lose my temper very quickly. They say I’m like a baby with a strong inclination to be irrational. They say this is what instigators want in order to achieve their goal of sabotaging my personal and professional relationships using character assassination tactics. For instance, some people have been “informing” family members of my “promiscuous” history, “financial upheavals,” “smoking and drinking,” “lack of well-informed opinions,” “man eating habits,” “lesbian stalking,” “misogyny,” and so on and so forth. In this way, these “instigators” are similar to the people who participated in the aforementioned “online survey,” suggesting that rape victims “asked for it.” The sad reality is that an angry queer woman with an open-to-the-public history of rape and sexual violence never gets the “benefit of the doubt.”

For these reasons, I don’t think there is a lot of difference between victimized Pakistani queer women and the women and children killed in wars for three reasons: the excessive feminization of poverty and the resulting patronization of women; the homophobia and transphobia that leads to the invisibility of queer Pakistani women, as well as the subordination of our self-esteem, enforced feminization, and coercive sex; and the fact that a Pakistani queer woman without a sexual partner is considered “desperately available” and “exploitable.” So, the million dollar questions are: Are efforts intended to increase reporting sexual harassment worth investing in for the greater good of womanity? What does the future of feminism hold for the queer women of the third world? Unless there are a hundred witnesses willing to stand up against the rapist, “solidarity” doesn’t really mean a thing, does it?

“You do what you think is best and what you think is right…when you feel ready,” was Malala’s concluding remark on that last phone call. After nodding good bye and catching the flight back to Lahore, I kept agonizing over why she didn’t say a word to me at Karachi. I expected her to show some re-assurance then, like good-luck hug at least. The message was plain and simple: I had to be ready no matter what the consequences might be. Women go bankrupt and lose their jobs, honor and reputation, their right to good health and education and their lives every day. With the exception of my seemingly worthless life, I have nothing else left to lose.
_________________________________________________________ 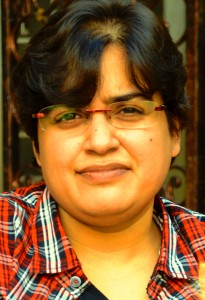 Fakhra Hassan is a self-identified queer feminist. She is an academic with scholarly interests in eco-feminism, history of religion art, typography, fashion, and music. She is currently working on publishing her first book.