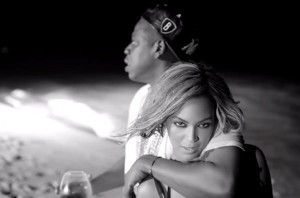 Fourteen weeks after its release, Drunk In Love has only now fallen to number 10 on Billboard’s “The Hot 100.” At week nine, it was still number one in four Billboard Categories, including top R&B/Hip-Hop song, most airplay for an R&B song, and most streamed for an R&B/Hip-hop song. I think this is both a testament to Beyoncé’s artistic brilliance and an example of how sexually violent lyricism, demonstrated Jay-Z’s verse, produces enduring cultural mantras. In the case of Drunk in Love, the nature of the violence and the well documented—or well crafted—intimacy between Jay-Z and Beyoncé in the visual narrative of the song invite important conversations around how erotic consent and intentional relationships to power inform our ability to undermine and reproduce violence.

It is through this lens that I listen to Beyoncé ’s Drunk in Love. In fact, while I thoroughly love Beyoncé ’s new album, the conversations and processes that I have been a part of because of the controversial track have made it single handedly the most influential in refining my stance for women’s liberation. To be clear, however, my issue with the song is not so much with Beyoncé ’s feminism, which has been thoroughly critiqued, complicated, and defended in pieces published at The Huffington Post, The Guardian, and Black Girl Dangerous. My issue is with Jay‐Z’s lack of a feminist stance as demonstrated in his verse on the track. The apex of the verse, excerpted below, speaks volumes as to how Hip-Hop masculinity understands consent:

Jay-Z’s invocation of Ike Turner is a troubling nod to one of the most visible examples of domestic violence and violence against women in the music industry. This invocation is one of several individuals Jay-Z identifies himself with in the verse, including Mike Tyson who was found guilty of rape charges in 1992. I think its important to mark that the “Eat the cake Anna Mae” line is an allusion to a scene in What’s Love Got to Do With It (1993).

The nature of the violence in the scene was not explicitly sexual, although other scenes in the film were.  Consequently, the lyric becomes a conscious and calculated formulation. Jay‐Z intentionally grafting an association between sex and domestic violence speaks directly to the power and popular allure of sexually violent misogyny in Hip‐Hop.

My initial reaction to Jay‐Z’s verse was a cellular cringe and a zero tolerance approach to spending mental energy unpacking the sexual violence of the lyrics. Hove’s fifty‐seven second verse felt like a hurt ego, an attempt to reclaim footing in what was surely to be one of the most important moments in music this decade; a moment that literally made him a silhouette in its visual aesthetic and epic soundscape. Likely the most powerful man in Hip‐Hop, Jay‐Z is a calculated businessman. The math that shimmered on the horizon of Beyoncé ’s album drop leaves plenty for a threatened masculinity to compete with. While Jay was able to secure a platinum deal via Samsung before Magna Carta Holy Grail ever touched the public ear, Beyoncé ’s blind drop not only shut down the internet—as did Holy Grail—but secured 828,773 sales during opening weekend, which to me equates a platinum drop. This she accomplished without the artistic marketing tactics or business dealings that bolstered the drop of Magna Carta Holy Grail.

However, the implications of the Ike Turner reference became more complicated for me during an impromptu listening party some friends and I held. There, Patrisse Cullors posed the following question, “Given that we don’t know Jay‐Z and Beyoncé ’s sex life, what if Beyoncé actually consents to that sexual role play?” I had some initial resistance to the idea of exploring how consent might have motivated the now infamous verse, particularly in the context of an industry that rewards social capital to the production of sexually violent mantras. I actually believe Jay‐Z loves Beyoncé. However, I also believe that if he was a feminist he could do a better job. The reality is that men don’t understand the crisis of sexual violence nor do they understand consent as a counter‐hegemonic practice. Hip‐Hop awards them permission to profit off of that dissonance. BDSM offers Hip-Hop masculinity practices that can undermine this celebrated violence. 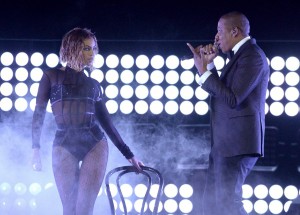 Consent in essence is about safety and agency; two ingredients that are the antithesis of trauma. We can scale this politic of agency all they way up to our community relationships to systemic power. In fact, the essence of the Black Panther Party’s twelve‐point program was about demanding agency and refusing to consent to the violence of systemic racism. This is why the twelve‐point program called for a Black plebiscite; a legal form by which Black people could decide their relationship to the United States. It needs to be said that the Black Panther Party suffered from undeconstructed masculinity and patriarchal violence; as does Jay‐Z. Hove’s verse identifies him in the genealogy of that violence during what might be one of the most important feminist moments in Beyoncé ’s career thus far.

The type of radical agency, and imagination, required to call for a Black plebiscite is still relevant to our engagements with systems of oppression and to our practice as erotic/intimate beings. Furthermore, invoking dignity and common sense again, I imagine a Black plebiscite resulting in something more radical than consenting to mass incarceration, unemployment rates that are triple the national average, state and vigilante violence against Black Trans women, dehumanizing restraints of incarcerated women giving birth, a national health crisis for Black folks, and existential neglect surrounding the value of Black life. Furthermore, what interests me are the tools that kink/BDSM has to offer in cultivating the capacity to materialize those demands.

My bottom line with Beyoncé is not necessarily whether her bedroom politics line up with her systemic analysis but rather does her, or any person’s, politics/practice of desire have a symbiotic relationship with how they practice systemic critique. Does our articulation of the erotic and play with power nourish our capacity to undermine patriarchy? In Beyoncé ’s case, if a consensual role play with Jay-Z enhances her capacity to coordinate a bunch of badass women to lead an uprising against police in riot gear—who no doubt would rely on misogynist descriptions and non‐consensual violence to tear them down—then more Superpower to her.

My conversation with Jay‐Z, however, is a different question of accountability. Specifically, I have serious questions about how he understands his position in the driver seat of Hip‐Hop, one of capitalism’s most prolific engines of misogyny and rape culture. I imagine repeating the words ”I’m nice” at the beginning of his verse, and strategically sequential to the “Anne Mae” reference, was his attempt to draw a line of separation between the whimsical land of metaphor and his real practice as an intimate partner. Another reminder that the logic of hip‐hop misogyny is dangerously simple; just as simple as Rick Ross’s statement that his rape lyrics in U.O.E.N.O were misunderstood because he didn’t actually use the word “rape.”

I’m curious, Jay‐Z, how you reconcile these lyrics with Rhianna, who you have mentored into the industry. How do you reconcile the fact that she, in the most literal sense, had to navigate your verse during her 2009 rupture with Chris Brown? I wonder how, or whether or not you even feel the need to, reconcile Drunk in Love with Chris Brown? Whether you see it or not, your mantras contribute to the ideology that convinced Chris Brown that his sexual boundaries were not crossed as a child. The non‐consent lifted up, or left unclear, in your verse is directly connected to Chris Brown interpreting his experience of child sexual abuse as a right of passage. It is directly connected to the multitude of men who morph the trauma of child sexual abuse into hidden wounds that have no choice but to burst, or into platinum records that have no choice but to reproduce harm.

Mark-Anthony Johnson is Los Angeles based writer, healer and a volunteer staff member with Dignity and Power Now; a Los Angeles based organization building a grassroots civil rights movement for the dignity of incarcerated people and the power to end state violence. As a spoken word poet, Mark-Anthony’s work is dedicated to honoring spirit while using art as a tool for liberation. For him, poetry is both a necessary vehicle in the practice of prison abolition and an intimate craft that invites us to heal from and vision past mass incarceration and state violence. Additionally, as a Licensed Acupuncturist, Mark-Anthony is invested in paradigm shifts in addressing mental health conditions; shifts that necessitate the decriminalization of psychospiritual events and prioritize healing from the trauma of state violence.