Personal is Political: On Why My Girlfriend and I Got Hitched & No One Was Invited – The Feminist Wire

Home / LGBTQI / Personal is Political: On Why My Girlfriend and I Got Hitched & No One Was Invited

Personal is Political: On Why My Girlfriend and I Got Hitched & No One Was Invited 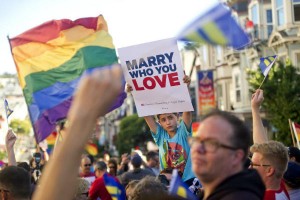 We sat under a broad green canopy of trees on the Western slopes of the Cascade Mountains and talked about getting married. It was the mid-90s, so actually, we talked about having a commitment ceremony which was more de rigueur. Our feet were planted on the smooth round stones at the bottom of the creek, and the cool, crisp water swirled around us.

Andrea said, “Family only.  We have too many friends, and I don’t want to leave somebody out or hurt their feelings.”

I nodded in agreement. “Maybe we should have it at that vegan restaurant we love in San Francisco. That way it’s neutral, and our parents won’t get all territorial.”

We mulled over questions like: Would there be a ceremony or just a gathering? If there was a ceremony, what would it say? Who would officiate? The questions sat in the silence that grew between us. I was getting nervous. I couldn’t tell what Andrea was thinking, but I could see that her enthusiasm had waned.

Andrea erupted out of the uncomfortable silence with a burst of her rich loud guffaw. She laughed so hard that tears started leaking out the sides of her eyes. “Why are we doing this?” she howled.

“I don’t know,” I sighed. “Because we want to show our parents that we are really serious about each other?” I couldn’t keep a straight face.

“Who cares?” Andrea threw her hands up in the air.

“Can you imagine my parents and your parents actually getting together…at an organic vegan restaurant?!”

“No!” I dissolved into giggles and nearly slid off the bank of the creek.

“What were we thinking?” Andrea shivered and then shouted. “Weddings are like Christmas with all those hard wired expectations—white dresses, diamonds, eternal love, and happy endings.”

Andrea sobered and took my hand. “I love you, honey, and I want to share my life with you and I really, really don’t want to marry you.”

I nodded my head. “I don’t want to marry you either. Just thinking about the whole romantic/forever/in front of a lot of people vow thing makes me nauseous.”

“I totally get it, honey.” She kissed me. “Will you please not marry me?”

“Yes, I will not marry you.” We slipped on our sandals, and walked back to the campsite.

We didn’t get married, but we did register as domestic partners when we moved to California a couple years later. We wrote out our wills, explicitly leaving everything to each other, especially custody of our yet unborn children. We gave each other power of attorney. When we bought our house, we made sure that we were each listed as equal owners. When the kids were born in the early 2000s, we legally adopted each other’s birth children, complete with fingerprinting and meetings with social workers before we went in front of the judge.

We were able to secure the same rights on the state level as married people, after lots of documents, time, money, and careful planning. But there were still those 1,100 rights and benefits on the federal level that we could not access—things that have nothing to do with God, or dresses, or romance, but which are the daily necessities of conducting one’s life comfortably in a family unit.

On the day that the Supreme Court ruling on same sex marriage was handed down and full and equal rights for my family became possible on both the state and federal level, I marched with my sons Jacob and Sasha from our house to the steps of the Santa Cruz courthouse to celebrate. Actually, the boys rode their scooters, and I marched behind, waving an enormous rainbow flag. 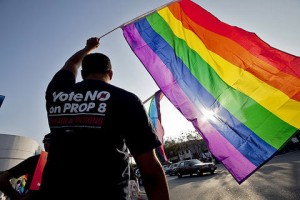 It wasn’t Jacob and Sasha’s first time at the courthouse. We were there in November 2008 to protest the passage of Proposition 8. I held a wriggling three year old Sasha in my arms and explained to five year old Jacob, as best I could, the tug of war around same sex marriage that prevented Andrea and I from getting married, even though we didn’t really want to get married in the first place.

On that hot day at the end of June, I basked in the collective euphoria on the steps of our little courthouse surrounded by our community. Our rabbi was there, so was my chiropractor, my friend’s nanny, my old boss, my favorite checker from the grocery store, and other lesbian moms I know from the playground. I was so grateful for the lawyers, the plaintiffs who withstood the public spotlight, and the tens of thousands, who organized, petitioned, and rallied.

Finally, as Representative Jerrold Nadler (D-New York) said, we had a separation of church and state,

People can believe what they want. They can go to what church they want, what synagogue, what mosque, and they can believe what they want—that’s a question of religious belief. We are not dealing with religious belief in all these questions. We are dealing with what the state or government does and we have a separation of church and state in this country. So, for government purposes you can be married. The church may not recognize it. It’s their business. And if you don’t want to recognize it from a religious point of view, it’s your business.

But why do we have to call it marriage in the first place? The very word has such deep religious connotations. In my opinion, the religious sanctity of marriage is just a cover up for it being an institution of patriarchy that had absolutely nothing to do with God and love and everything to do with property rights, making strategic alliances, and expanding the family labor force.

From the time that the whole same-sex marriage movement began, I’d been a proponent for “civil unions” instead, since God really has nothing to do with taxes, social security, inheritance, health insurance, immigration, and hospital visitation rights. Straight and gay couples across the board could apply for a civil union to access their state and federal rights and then, go and have whatever spiritual or romantic marriage ceremony they wanted.

A few of months later, when my two moms got married on their 34th anniversary, I found out that to activate your wedding license, you actually have to have a ceremony complete with an officiant, a witness, and words like “joy” and “solemn” and “with this ring, I thee wed.”

Andrea and I hemmed and hawed about tying the knot. It was our accountant who finally did it. She looked at me with puppy dog eyes every time I ran into her at the farmer’s market. She had a deep hope that she would never have to file another “damn” (registered domestic partner) claim again. So we eked out a date right before the county closed for winter holiday furlough, and at 4 pm on a weekday afternoon, so neither of us had to miss work, Andrea and I got married.

The boys and my moms were there, just like on the days when I adopted Jacob and Andrea adopted Sasha. It wasn’t sentimental, but it did feel like a sincere day of political action—a day of accessing the civil rights that we have all fought for together. I brought the clerk who married us some brownies. They boys looked very cute in the late afternoon light that streamed through the clerk’s office window, and my moms camped up their solemn witness role by brandishing their pens with flourish.  Andrea and I tried not to laugh during the mushy parts of the ceremony, but I couldn’t help myself. I choked up when the clerk said, “By the power vested in me by the State of California.”
_________________________________________________________ 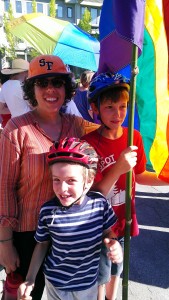 Jenny Kurzweil lives with her wife and their two children in Santa Cruz. She is the author of Fields that Dream: A Journey to the Roots of Our Food and is currently working on a memoir about growing up with a Jewish grandmother and two goy stepmothers in a radical feminist lesbian post-Communist household.