In the wake of the gay-marriage debate sweeping the nation, I am aware that my stance on marriage equality is inextricably linked to my experience as a bi-racial child of a single mother raised in the racist South. As everyone waited in anticipation this past summer for news of the Supreme Court decision, I was in a constant state of conflict because I did not know what I wanted the decision to be. While I could not support the unnecessary yet explicit discrimination of a group of people, I also could not support assimilation into the institution of marriage. I understand both sides, marriage equality proponents and anti-marriage queer politics. And while I’m empathetic to both sides, I’m inclined to reject marriage as an end goal. My reasons are not altogether queer, however, but2 intersectional.

I have reverberating memories of sitting in the same church pew, in the same few Sunday dresses, listening to the same sermons over and over again. While Sunday sermons largely emphasized moral obligation, such as abstaining from sex until marriage or the dangers of homosexuality, there’s one particular Sunday message I vividly remember. From the pulpit, our preacher professed the evils of interracial marriage and its detriment on “the children.”  Even though I tried to hide my discomfort, my increased perspiration and my inability to make eye contact gave me away. My sister and I were the only non-white people in the church.

That same discomfort resurfaced during my pre-teen attempts at dating. I regularly encountered the same verdict: “I can’t date you. I’m not allowed to date black people.” On one occasion, I even challenged a friend’s mother. She echoed my preacher: “You have to think about the children.” How could I not have thought about “the children?” I AM that child.

Growing up, every mistake I made was attributed to my mother’s interracial relationship and single parenting. The things I did, the laws I might break, and even what I felt was interpreted as a result of being that child—born with a white mother and a Black father, and lacking the upbringing of a mother and a father.  If I did poorly in school or received detention, I was made to feel like a burden on my single mother as everyone around her attributed the struggles of upbringing a deviant child to the absence of a man. Within this culture, I’m devalued and stigmatized. But you know what this stigma was not from? Having a white mother and a Black father or being raised by two strong women. I’m devalued because the history of the institution of marriage holds precedent for people to feel justified in rejecting me, discriminating against me, stripping me of my rights, and showing me how a second-class citizen lives.

But how does my experience as a bi-racial woman with a “deviant” background inform my perspective on the current debate surrounding “gay’ marriage? I faced informal sanctions, not only for not being white but because I did not grow up with the presence of a man. Some may see my negative feelings towards the institution of marriage at a stretch, especially being born two decades after the legalization of interracial marriage and in the midst of wider legalization of gay marriage. But, as a queer woman too, I have much invested in the politics surrounding queer life. Policy affects my life chances.

Just like the stigmatization that followed the children of interracial couples, the children of gay couples are likely to face the same criticism of growing up in a home with two parents deemed “ill-fit.” In twenty years, same-sex parents are still going to be chastised for not “thinking about the children,” and the children will immediately be branded as outsiders. The wellbeing of children in gay families is often used to argue against gay marriage. This argument mirrors the debate that surrounded interracial marriage. When progress does happen, these children face a stigma; they are presumed to be “unwell.” I am presumed to be “unwell.” So, what does this invidious institution and the people that are constantly trying to “save” it have to offer me? I’ll tell you what: absolutely nothing.

Yet marriage is common, expected, and rarely questioned. Partly because everything about marriage is normalized—every woman is supposed to dream about it and every man is supposed to partake in it. When it takes a sour turn, it isn’t attributed to a flaw of the institution but rather a flaw in the relationship. We take on a blame-the-person approach. Marriage is a VIP institution with exclusive membership and benefits. Only specific people can become members, and once a member one must adhere to the norms of the institution. Marriage becomes an external force of control over one’s life and opposing it never seems to prevail—those who reject membership receive no benefits and are chastised for not participating in the institution that finally admitted them after all that fuss.

The older I get and the more I experience relationships, the more I realize that the benefits associated with marriage will be something I’m likely to face. I’m left with two options: assimilate into an institution perpetuating privilege or hold on to second-class citizenship. Why must I have to surrender my dignity, my freedom, for the sake of benefits that should be afforded to me as a person sharing a home with someone? As a parent of a child? As a significant other to someone hospitalized? Marriage entitles couples a plethora of benefits that are not given to single people, perpetuating the hierarchy of privilege. Single people and couples not allowed to marry become victims of this institution, with no other option but to assimilate when offered the chance.

My problem lies in that I cannot assimilate or succumb to a system that is used to justify racism, the inefficiency of single parenting, and homophobia. 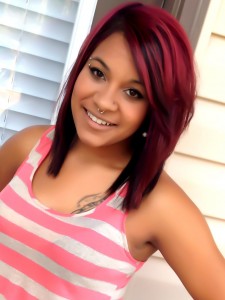 T’Shana McClain is a very recent honors graduate from Western Carolina University where she received a Bachelor’s of Science in Sociology and Psychology. During her undergraduate career, the National Conference for Undergraduate Research accepted her research titled “North Carolina’s Amendment One: Making History.” She was nominated and chosen to give the commencement address for her 2013 graduating class. Her interests are on the intersectionality of race, sex, class, and gender, which is what she devotes much of her written work to.