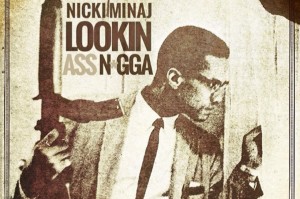 Just a few days before Valentine’s Day and in the midst of Black History Month, pop star and rapper Nicki Minaj released her show-no-love single “Lookin Ass Niggas,” accompanied by a photo-shopped image of an iconically armed Malcolm X peering out the window of his home, prepared to defend himself and his family/womenfolk “by any means necessary.”

The image holds deep resonance for the hip-hop generation – signified upon in the lyrics of Public Enemy or visually echoed in KRS-One’s Boogie Down Productions album cover and even in Aaron McGruder’s Boondocks comics.  However, Nicki Minaj appropriates Malcolm X’s image, not to comment on racial politics but to critique the black male gaze.  Needless to say, her actions have caused outrage – from denunciations from the family of Malcolm X to various petitions begun by the likes of Kevin Powell and Rosa Clemente accusing the rapper of disrespecting Malcolm X’s legacy, to response tracks from Trey Songz and Cassidy, which attacked Nicki Minaj through rehashed misogynistic lyrics that have come to characterize hip-hop music.

Minaj’s actions are problematic, not just in her appropriation of Malcolm X to call out men on their sexual and economic shortcomings, but also in her recycling of homophobic and transphobic lyrics.  I have found her limited lens on history equally troubling.  While playing to the male gaze in sexy lingerie and tight dress as she simultaneously assaults that gaze with both verbal putdowns and gun violence, Minaj suggests a history of self-defense.  However, in raising the specter of self-defense through the signified Malcolm X image, her use of the lens of racial history to analogize sexual politics inadvertently erases black women’s own militant history that has resorted to violent response against sexism and racism.  Where are the available black militant female images from history to better drive home her point?

In other words, why did Nicki Minaj not think to signify on Harriet Tubman and her gun, versus the iconic Malcolm X and his?  Granted, such signifying would have also been greeted with outrage: Hasn’t Tubman suffered enough misappropriation with Russell Simmons’ green-lighting of that abhorrent “Harriet Tubman Sex Tape”?  Of course, different contexts are in place.  In the case of the All Def Digital video, Tubman is reduced to sexual and comical spectacle; whereas Minaj’s politics call for the recognition of black women’s historic self-defense.

What I am suggesting here is that – through Tubman’s gun, used to motivate fugitive slaves on the run and to even “correct” slavish behavior by refusing any slaves’ return to the plantation –this image would have worked strategically for Minaj as both a history of self-defense and a corrective and critical tool militantly advocating black liberation “by any means necessary.”

But “Black History Month” doesn’t remember Tubman that way – think about the Google Doodle on the first day of February, featuring Tubman carrying a lantern instead of her gun.

This suggests the suppression of Tubman’s militant history, which is why in the available iconography of black resistance, Minaj turns to the black masculine image of Malcolm X, even though there are so many assertive, radical, and militant black women in history who could prove her point of self-defense from both the racialized and sexualized gaze. 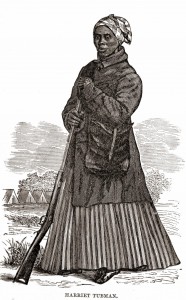 Beyond Tubman, other black women engaged in radical means of self-defense.  There was the enslaved Sukie who – having nearly killed her slaveowner who tried to rape her – was sold on the auction block and abruptly returned the white male gaze of her potential buyers when she vulgarly invited them to “see if dey could fine any teef down dere” as she lifted up her dress just as they were inspecting the teeth in her mouth (Tell me this is not the precursor to black women’s linguistic defense skills to which Minaj is indebted!).  Other enslaved women, such as Celia and Margaret Garner, resorted to outright murder of her owner (in the case of Celia) or her own children (in the case of Garner) to resist a system that exploited their bodies for both productive and reproductive labor.

Still others resisted in what Stephanie Camp calls “everyday resistance”: “Theft, foot dragging, short-term flight, and feigning illness were commonplace acts in the Old South and are widely understood to be everyday forms of resistance – hidden or indirect expressions of dissent, quiet ways of reclaiming a measure of control over goods, time, or parts of one’s life” (Camp 2004, 2).   In the realm of sexual politics, some enslaved women – having little control over their sexuality – would seize the opportunity that emancipation delivered to not be bothered with sexual unions, as in the case of emancipated Rose Williams who decided: “After what I done for de massa…I’s never wants to truck with any man.  De Lawd forgive dis cullud woman, but he have to ‘scuse me and look for some others for to ‘plenish the earth” (Giddings 1984, 74).

Such refusal was radical then and it would be radical now.  When one considers the continuation of racialized and sexualized violence against black women after slavery, Rose Williams’ self-determination to “never marry” should be interpreted as self-defense, especially in the wake of Reconstruction when violence escalated and the convict lease system tried to reclaim former slaves for re-enslavement through the penal system.  As historian Talitha LeFlouria’s work on black women’s convict labor in the post-Civil War South indicates, black women were equally targeted for this brutal criminalization, which required their continued acts of resistance that they had enacted during slavery.  One astonishing example that LeFlouria’s work uncovers is the time when some black female prison inmates had set fire to the Georgia State Prison Farm within a year that it had been established in 1899.

Of course, during this era, activist writers like Ida B. Wells boldly confronted both lynch law and the convict lease system, urging African Americans to migrate from the South and withhold their economic power, while also advocating for self-defense as she carried a pistol – concealed under her petticoats – determined to “sell my life as dearly as possible.”

The Civil Rights era lauded the importance of nonviolence as a critical tool of resistance, and we certainly have the invaluable example of Rosa Parks engaging in resistance by refusing to give up her seat in defiance of Jim Crow laws.  But what histories are suppressed in these select moments for Black History?  Apart from the emphasis of nonviolence as the presumed superior position over violent resistance is the suppression of Rosa Parks’ earlier activist work against sexual violence, as with her legal advocacy for Recy Taylor, victim of a 1944 gang rape by white perpetrators.  Such work is now documented in Danielle McGuire’s At the Dark End of the Street, a revisionist history that re-centers black women’s resistance to sexual violence as the impetus for the Civil Rights Movement, culminating with the case of Joann Little, who was acquitted in the 1974 murder of her prison-guard rapist. 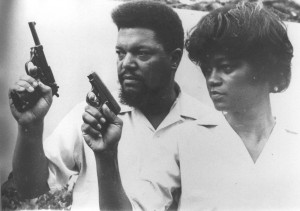 All these examples challenge the phallocentric focus of the black masculine subject as signifier of militant resistance.  And while I have mostly focused on the example of African American women, the Trinidadian-born Nicki Minaj certainly has an alternative Afro-Caribbean history to draw from, as M. Nourbese Philip reminds us with the Jamettes, street women, dancers, and stick fighters in early Port-au-Spain who boldly walked the streets, bared their bodies, and were not above violently defending themselves.  As Philip poetically muses:

We could be starting our genealogy with Nanny of the Maroons [Jamaican  warrior leader who strategically used nudity in her battles with British slaveowners]…Women warriors taking their inner space into the outer space of  battle and war where men violate the inner space of women…Rum shop, cock fight, steel pan yard, street corner – only jamettes hanging about these places.  Women and men…would be calling these women out their names, describing them over the years as wajanks, jackabats, spoats, and ho’s…We calling them jamettes. For the present. (Philip 1994, 78 emphasis in original)

It is this jamette history that Nicki Minaj recalls through her blending of sexualized spectacle with her reclamation of armed black militancy for black feminine representation. And while Minaj focuses her politics for an individualized and personal means of self-defense, we may want to broaden this lens and consider how it functions within the larger sphere of black women’s collective militant defense of themselves and their communities: whether in the context of Jamettes, prepared to fight the male gaze that dares to shame and police their bodies to curtail their freedoms, or in the context of women on the African continent engaging in “naked protests,” or even in the context of women of color here in the U.S. “standing their ground” against street harassment, domestic and sexual violence, and racial profiling in various street rallies, Twitter call-outs, and everyday acts of resistance.

As Black History Month segues to Women’s History Month, black women’s militant histories offer an opportunity to intersect racial and sexual politics.  However, such histories are not “respectable” enough to memorialize, which is why Minaj’s refusal to engage respectability politics actually mirrors the subversive actions that black women engaged to defend themselves.  We certainly need to move beyond respectability politics to uncover these suppressed histories and challenge present-day attempts to repress black female sexual defenses, especially in light of how black women have had to defend themselves, their children, and their communities “by any means necessary.”

But these histories are not as legible in our iconographic understandings of black resistance, hence Minaj’s problematic use of Malcolm X and a glorified assault rifle culture; her gender message is thus eclipsed by the current racial climate that leaves our black youth, from Trayvon Martin to Jordan Davis to Renisha McBride, gunned down in the name of white self-defense.  Nonetheless, black women’s self-defense history cannot be ignored, especially when other modes of self-defense are legitimized. Such histories have never been respectable, and our defense of ourselves, then and now, has always been urgent.

Giddings, Paula.  1984.  When and Where I Enter: The Impact of Black Women in Race and Sex in America.  NY: William Morrow & Co.

McGuire, Danielle L.  2010.  At the Dark End of the Street:  Black Women, Rape, and Resistance – A New History of the Civil Rights Movement from Rosa Parks to the Rise of Black       Power.  New York:  Random House.