New Revolutions? Finding and Naming Them for Transnational Feminisms – The Feminist Wire

New Revolutions? Finding and Naming Them for Transnational Feminisms 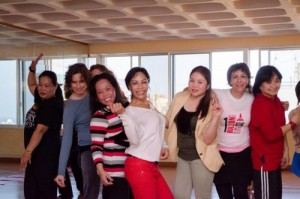 In Beirut, +20 women rose boldly to dance in unity w/ their sisters around the world defying injustice against women.

My writing is a small offering to give political voice to the extra-ordinary attempt at trans-national and cultural and racial and class and gender solidarity. It is to give a public recognition to women doing revolution on behalf of their bodies—sexually, economically, racially, politically. “We” are migrants, middle class, unemployed, poor, hungry, tired, gifted, powerful, indigenous, colored, and we trust each other to stand together against violence in all its forms, perhaps mostly because of the shared violence of our bodies—in rape, and war, and hunger, and dispossession.

I am giving witness: to see, to look, to name, to think, to act, “to dance,” “to rise” for justice. It is also an attempt to theorize what a woman’s revolution might look like — if you are really willing to “see” it: inclusively messy with every type and kind of sex and gender that is raced and classed, and devoted to freeing our bodies of sexual violence.

Without theory there is no revolutionary vision or practice. It is why so many of us have been writing feminist theory for decades. Theory is not abstract. And it is not one and the same as idealism. Theory lets you see connections between sites—so that at any one point the structural and systemic expressions of events is knowable. Theory connects the dots, and the connected dots expose the messy connections of patriarchy. Such knowledge is the lifeblood of revolutionary acts.

The perpetual and monstrous violence directed at female sexual selves is too often silenced or ignored—in wars, both in the past and present, by the Pope and religious hierarchies and extremists of all kinds, and in descriptions of chattel slavery. When it is not being ignored it is specified as different than other kinds of violence, like domestic violence, or sexual harassment, or date rape. It is made particular, and somewhat different from the standard that is based on masculinist and public viewings.

Feminisms of all sorts for decades have argued that the personal is political, that there is a politics to sex, that sexual politics is encoded throughout all other manifestations of power—racial, gendered, cultural, geographical, environmental, and legal. No two women share identical tragedy, but instead know the similarity of their violations. The shared bodily vulnerability alongside its resistance binds women and girls across their differences to resist. Now, after decades of political work—from participating in union organizing with women in China or India, or women’s rights work in Ghana, or breast cancer health activism in Cuba, I see how women always already know the fear of sexual violence.

The violence in Syria, Congo, Chicago, USA, Kiev, Egypt, Venezuela, Brazil, and India are not reducible to sexual violence but they are each complexly connected to the invisibly palpable—expressed and repressed—politics of sex. Sexual violence is repeatedly articulated through racial, national, and gender violence.  If the fear and practice of sexual violence were eradicated, people would be free to love and be loved.

I have questions without easy answers. But the questions shed light on what we need to better know. Who gets to say what a revolution is? Who gets to say when it is happening? When was it recognized that revolutions were sweeping Europe in 1848? Who gave the status of revolution to the American and Russian Revolution? Who named the Arab revolutions simply the Arab Spring? What about the Occupy Movement? And, what of the continuing rebellions in Egypt? Recognizing the recent “risings” of One Billion Rising For Justice across the globe as revolutionary would be a revolution in and of itself.

Denying women’s revolutionary status is part of the denying of sex as political. That means that rape or incest is not only an individual act, but takes place in a systemic and systematic structural system of racist misogyny and patriarchy. Sexual violence is simultaneously personal and political but never simply one or the other; nor does it exist outside the racial and class matrix.

Sexual violence is war in yet another form. Each normalizes and naturalizes the other because of both the repression and expression of each. Karl von Clausewitz — thinking nothing about sex — popularized the notion that “war is simply politics in another form”: an opponent, so to speak, must succumb to another’s will. Politics and war are extreme, and are naturalized and normalized as such. Enter sexual violence, which is actually not “simple in any form,” yet makes maiming, torture and death almost ordinary. Rape becomes the invisible site of war through the discourse of sex. Instead of political it is made inevitable, rather than an abomination.

At a “State of Female Justice” panel in California, hosted by Laura Flanders of GRITTV, Eve Ensler, founder of 1BR4Justice, spoke about women organizing across their differences of privilege and access to build a worldwide movement. She spoke of building and establishing trust with women in the Congo. She spoke of the risk, hardship and pain of crossing divisions, but of staying there for the hurt, and the building after. She described an actual political practice of building love and finding new energy with it to continue no matter what. She described what coalition building actually is—tears and risk and doubt and new bonds.

We need to stop looking for leaders or making talented women heroes or villains. It makes the rest of us passive and less insurgent than “we” can be. Ordinary people make revolutions and become extra-ordinary in numbers. It is the violence that keeps us from seeing and loving each other. I am daring us to find this connection.

A just society allows people to love one another. Any person is free to do so because they are not fearful of violence, or oppression, or exploitation. If there were no rape, no incest, no sexual battery, no sexual violence of any and all sorts, women could love themselves, and others, with no shame, or fear, or blame. If this violence were removed from the planet, war of all sorts would become an anathema. If war is sexual violence by other means, then violence in all its forms must be de-normalized.

Today the more complex and multiply identified bodies of women continue forward. Whatever the color or race or class or gender, the “we” of rape has been contextualized with variety. “We” imagine together. “We” know together. So there is a “we” even though the “we” does not erase difference, inequality, or assume sameness. So this feminist revolution has been in process for many decades and is now in new phases. All of us need to recognize the false starts and the new beginnings.

The coalitions we need to build recognize that no two people have the same panoply of identities and yet we trust that we share enough to believe in each other. A problem with intersectional selves is that it makes each of us complex, right alongside the problems we wish to address. And, yet, the multiplicity of oppressions can also seem to dilute the shared connections.

This—sexual violence and the way it repeatedly intersects with all other structural violence—locates a revolutionary political site. It is glue. Revolution will derive from struggles here. Although sex is relegated to the personal and distinguished from the political, it is the political of the personal. Everything is turned inside out from here. Kind of like Elizabeth Streb imagining what it means to fall up, rather than fall down.   It is what OBR4Justice means when we “rise” and stand up with intentionality.

OBR4Justice exploded on February 14, 2014 in flash mobs, and song, and dance, and marches, and movies, and in myriad forms of individual expression. Multiple social platforms speak to this process: videos, films, many shown on Facebook, and Twitter.

Every kind of site is used: texting, calling, emailing, watching, and also being.  Bodies matter so they are also present. “We” see each other and hug and feel power from our presence together. But we also meet on Skype and trust and hug through cyberspace. There are no simple borders here. Everything is in play.

Feminisms of all and every sort are happening. The connectedness between them is the revolution.  Without a personal history of sexual violence I was pulled more and more to the visceral understanding between women about the violence they receive and endure. Politics explodes from here. Little if any translation is needed. It creates sisters under and with the skin.

Violence bespeaks the failure of revolutionary politics. Flip your vision. Look for a revolution where you see people loving justice and making justice with and through love.  Look, see and name it. 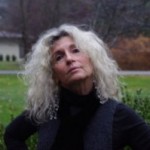