Writing Herstory and Resisting Invisibility: A Review of Janet Mock’s Redefining Realness: My Path to Womanhood, Identity, Love & So Much More – The Feminist Wire

Writing Herstory and Resisting Invisibility: A Review of Janet Mock’s Redefining Realness: My Path to Womanhood, Identity, Love & So Much More 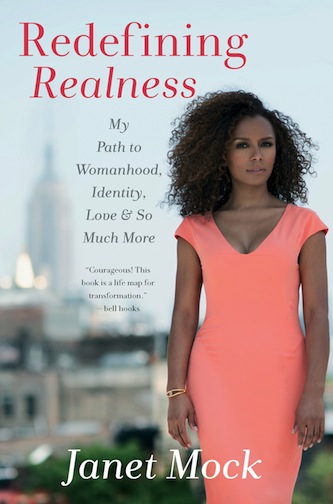 Cisgender heterosexuals and lesbian/gay/bisexual people too often disregard the lived experiences and interior lives of transgender women and men—even in these queer times. The preferred gender pronouns used by trans men and women tend to be conveniently dropped in favor of forms of misidentification that serve the interests of the identifier and never the needs of the identified. Trans women and men are often subjected to imposing interrogations about categories of “biological sex” – sex organs and sex practices – as opposed to the dynamism of gender expression as reimagined and experienced by transgender individuals. Jokes are made. Violence is done. Allies speak up sometimes. And we all exist within a hegemonic culture that is steeped in trans-antagonism, which negatively impacts us all: this is a discourse that places gender solely in the biological body with little room for soul or desire or presentation or performance or lived experience.

Take, for example, two recent interviews of transgender women that were aired on national US networks.

The first occurred in early January, during a segment where Katie Couric interviewed television stars Laverne Cox (Orange is the New Black) and Carmen Carrera (RuPaul’s Drag Race) on her ABC show “Katie.” While the women discussed their lives, careers, and the myriad issues faced by transgender women and men, Katie seemed most interested in hearing her guests wax poetic about sex reassignment surgery and genitalia. In response, Cox noted, “I think that the preoccupation with transition and with surgery objectifies trans people and then we don’t get to really deal with the real lived experiences.”

A month later, Janet Mock, author of Redefining Realness: My Path to Womanhood, Identity, Love & So Much More, appeared on CNN’s Piers Morgan behind a sensationalistic and brash subheading that read “Janet Mock: Was a boy until 18” even though Mock’s own narrative counters Morgan’s discourteous claim.

Both interviews illuminate the fight that trans women and men daily engage within a culture of trans-antagonism and invisibility as they attempt to name and reclaim their lives and gender expressions on their on terms. The commitment to rigid understandings of gender expression, the gender binary, and trans experience is also evident as both hosts attempted to ask questions that, if answered, would have rested upon a narrow and hegemonic understanding of trans experience. The interviews animated a discursive and material struggle waged on trans personhoods, which is mundane in the lives of trans people. It’s a battle to claim one’s trans subjectivity in the midst of objectification by cisgender majorities. And it’s a battle that cisgender people must lose if transgender men and women are to gain freedom from the forms of dehumanization, gender policing, and various violences (even murder) that shapes and/or shortens their lives. Indeed, 53% of anti-LGBTQ homicides in 2012 were transgender women according to a report by the Anti-Violence Project. Given the stakes, we need trans voices to be heard, stories to be told, and counter narratives offered to respond to the problem of invisibility.

Janet Mock’s compelling memoir, Redefining Realness, entrancingly chronicles the story of a multiracial transwomen’s becoming within a society that is still widely antagonistic to the non-White, non-male, transgender, and economically challenged among us—those transwomen of color who tend to be disclaimed and invisibilized even within otherwise affirming queer spaces. Mock’s memoir will be praised as a seminal text precisely because it is both superb art and gripping autobiography that will inspire shifts in political consciousness and movements. Mock discusses her entire self, including her body and surgery and moments of coming-out to cis-identified men. But the work is not sensational; it is the story of a life told from the perspective of the woman who experienced it; it is autobiography and it moves beyond the problematic frameworks offered by TV interviewers. Readers will get the sense that with each turn of the page, we are turning some pages in our contemporary times.

Redefining Realness further establishes Mock as a contemporary writer whose work could easily be situated within the subgenre that some have named “trans memoir,” given that it offers the narrative of a life that reframes the overly-relied-upon fiction of gender binarism and illuminates the insidiousness of cisgender privilege. Mock’s book might be read alongside Kate Bernstein’s A Queer and Pleasant Danger: The true story of a nice Jewish boy who joins the Church of Scientology, and leaves twelve years later to become the lovely lady she is today or Jennifer Finney Boylan’s She’s Not There: A Life in Two Genders.

Mock, a former Staff Editor at People.com, is no stranger to the complex ways that identity politics are mediated within the broader public domain. But her self-described public “coming out” as a transwoman, like Cox’s and Carrera’s, catalyzed critical public conversations on the lived experiences of transgender woman of color. Her story captured the attention of national and global media outlets and audiences after the 2011 publication of Marie Claire’s tell-all profile, provocatively, if not sensationalistically titled, “I Was Born a Boy,” written by Kierno Mayo. Her memoir furthers the work that the Marie Claire profile began, pushing us to reimagine womanhood, gender identity and expression, and the intersectional identities that transwoman of color daily negotiate. To be sure, Redefining Realness significantly evidences the legitimacy of the oft-repeated feminist axiom, namely, the personal is political. Mock’s memoir is an alluringly written personal recollection and political manifesto.

Mock will be heralded as a valiant memoirist given what she achieves in this book. Ta-Nehisi Coates notes that any good memoirist must always remember while writing, “You are not a bad ass. You are a writer. The first step is to accept this and not fucking lie.” Mock doesn’t fucking lie. Instead, she is unflinchingly honest, and strikingly so, as she recalls with arresting detail and self-reflexivity the brutalizing experiences of sexual molestation and the calculated impacts of poverty, trans-antagonism, colorism, and racism in her life.

She writes, for instance,

That didn’t erase the unease I felt when the kids in the housing complex took notice of our darkness and kinky hair. Skin color wasn’t necessarily the target, as much as our blackness was the target for teasing. I say this because the kids who teased us were as brown as us, but we were black. There was a racial order that existed even in this group of tweens. They teased that Chad and I were popolo, Hawaiian slang for black people. Popolo are shiny berries that grow in clusters in the islands and are so black that they shine purple on branches. Hearing popolo on that playground didn’t sound as regal as its namesake berries. It sounded dirty, like something that stuck to our bodies, like the red dirt of the playground. I craved belonging, especially to be reflected in my mother and family, local-bred Hawaiian people, and spent my earlier years trying to separate from my blackness (p. 96).

Mock, founder of the social media campaign developed to raise awareness about the needs of transwomen of color aptly named #girlslikeus, is well aware of the ways that power within and outside of the publishing world is also organized around race in the lives of transwomen. For example, prior to the publication of her book, she attended a panel discussion at Barnard College on trans women’s literature and noted after, “What seemed to be glaringly missing from these comments was the fact that trans memoir has been dominated by a certain story, that of an older white trans person. From the 30-plus books I have on my shelf that would be categorized as trans memoir, only four of them are from trans women of color: Ceyenne Doroshow’s Cooking in Heels (2012); Ryka Aoki’s Seasonal Velocities (2012); Toni Newman’s I Rise (2011); The Lady Chablis’s Hiding My Candy (1997).”

She went on to state in the same blog, “…not all people, specifically trans women of color, are granted equal access to write, share and publish their stories. This unequal access to publishing has left a gaping hole in this genre and the imaginings of what we say is possible for trans people on the margins and those with the type of privilege afforded to those deemed pretty. Mock honestly acknowledges and critiques the privilege afforded to her because of her looks. Any reader of Black and Brown feminist literature might discern in Mock’s writings a commitment to exploring the interconnected and simultaneous forms of oppressions that transwomen contend with as well as the privileges that some, like Mock, are afforded.

That Mock quotes Black feminist heroines Audre Lorde and Barbara Smith in her introduction and Zora Neale Hurston’s words in the epigraph appearing before Chapter 1, all before page one of her book, strongly suggests that Redefining Realness is a continuation of the critical conversations on womanhood already begun by Black woman, though mostly cisgender, writers. Thus, Mock’s book might be best placed within a genealogy of Black women writers and the subgenre of trans memoir. In fact, Redefining Realness is intervening at multiple levels by opening space for the narrating of transwomen’s experiences within Black women’s writings typically written from the perspective of cisgender women, as well as expanding trans memoir beyond the perspective of bourgeois White trans men and women.

In this regard, Monica Roberts, writer and editor of TransGriot.com, offered the following response:

One of the things we African-American trans women have needed African American cis women to understand is that trans women are women.  We are just as down for the cause of uplifting Black womanhood if just given the opportunity to do so.  We have also needed cis Black women to understand that some of the issues we Black trans women face walking around in a Black female body are the same cultural and societal issues Black cis women face with the additional challenges of anti-trans discrimination and off the charts violence we have to deal with on top of it.

Mock has written herself into herstory. And she has done so with clarity and poetic brilliance. The readers challenge will be to develop a reading practice that shifts the cisgender gaze. In other words: readers who are not trans, even if we are L, G or B, should push ourselves to move beyond our own vision and to understand the world is larger than the gender binary we so often tacitly reinforce.  She did her work; now we must do ours.