My Tattoos are Not an Invitation – The Feminist Wire

Home / Academia / My Tattoos are Not an Invitation

My Tattoos are Not an Invitation 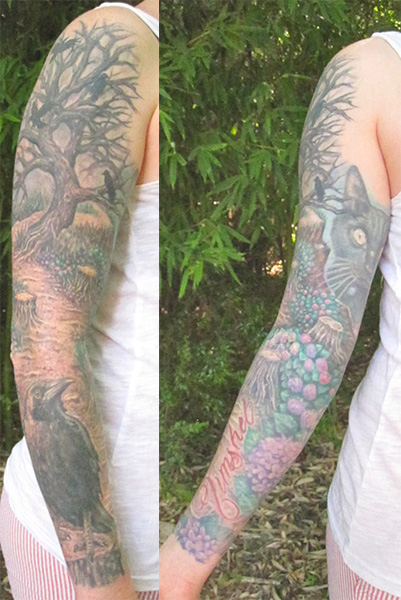 As a Coloradoan now living in Texas, the summer temperatures are trying. One way I cope is wearing heat-appropriate clothing. Wearing my sleeveless tops and dresses brings my full sleeve tattoo on my right arm to prominence. The reactions to this tattoo have been varied, from disapproving looks, questions about what it means, yells of “Nice tattoo!” or “Badass sleeve!” or even unwarranted touching and grabbing of my arm to get a closer look. At first I thought I should accept that this tattoo is more visible than my others, which means people will react to it. Maybe it’s surprising to see so many women embrace something that was once thought of as forbidden. But lately, the more interactions with strangers I have, the more I’m troubled by their reactions. I’m troubled to consider the ways that my female embodiment affects the way my tattoos are viewed in public. So, I created a list of things I really want to say to these strangers who feel it’s appropriate to grab my arm in public, and to answer all their questions about my tattoo’s meaning.

My tattoos are not for you.

I understand that I’m working against a strong assumption and history of the tattoo as self-expression. But, despite the visibility of my tattoo, I intended to express something to myself, not to everyone else. Just because I make my arm visible to the public does not mean the public should have access to my arm. Yes, it’s art, but it’s art for me. I worked to find a tattoo artist who would illustrate what I wanted my arm to express (again, to myself). If I wanted the public to have access to this art, I would work to display it in a museum.

Of course it means something.

But you don’t have the authority to critique my meaning. My tattoos are meaningful and personal, which means the scene displayed on my arm probably doesn’t make much sense to a stranger. That’s exactly how I like it. When I have a brief interaction with a salesperson or a barista, it’s difficult to explain the meaning of my tattoos in a few seconds of small talk. Even worse than “What does it mean?” is the judgment-laden, “Does it mean anything?” Usually some skepticism, and perhaps misunderstanding, accompanies this question. I understand that not everyone has or wants a tattoo, or even understands why others get tattoos, but that doesn’t mean I shouldn’t get tattoos for whatever reason I want. So trust me. It means a lot.

It’s not a right of passage or an adrenalin rush or a chance to prove my toughness. It hurts. A lot. I don’t feel an instant connection to everyone else who has a tattoo either, because I know the reasons for getting them are varied and multiple. Sitting in a chair for hours getting a tattoo is not enjoyable for me, but I choose to endure it because I appreciate the outcome.

I didn’t just get tattoos because I was (am) young.

I may have chosen to get my tattoos between 20 and 25 years old, but I didn’t just get them because it was a trend or I wanted to prove I could withstand the process.

My tattoo’s effects on my ability to get a job are no one else’s business but my own.

And maybe my mom’s. Believe me, she has some opinions about my tattoos. As a graduate student working toward a Ph.D. and teaching classes, I think I’ll be okay.

I don’t think it’s any coincidence that my young female embodiment seems to open me up to more comments, more questions, and more touching. In the midst of heavy debates about women’s access to healthcare and decisions about their own reproductive choices, I don’t think questioning my decisions about body art are unrelated to the trend of telling women they can’t make decisions about their own bodies. I feel that resonate when older generations ask me what my husband thinks of my tattoos or if he has any himself. Texas women are currently in a battle to claim their own choices about their bodies. As Texas women and men have gathered at the state capitol in Austin for the past 2 weeks, I’m reminded that women’s reproduction and health are not the only decisions censored. So to me, tattoos are an attempt to claim a choice about my body.

And in our culture of rape, I’m not surprised that some men feel that my visible display of body art is an invitation to yell about, touch, and seemingly compliment my tattoos. There is a tendency to believe that a woman’s display of tattoos, and more importantly the display of choices about how her body looks, equates to promiscuity.  Perhaps this attitude that women have looser morals if they have tattoos, as a recent study claims, is another excuse to regulate women’s actions and punish those who dissent. Perhaps that’s why some women, like myself, have chosen to transgress expectations of how a woman should look. Most importantly, I didn’t wear a sleeveless shirt so my tattoos would give the public free-reign to comment on and touch my body. It’s just hot out here. 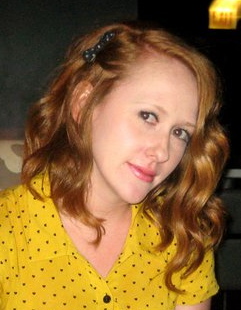 Related Itemsbody artculture of rapeobjectificationstreet harassmenttattoo
← Previous Story On Love, Empathy, and Pleasure in the Age of Neoliberalism
Next Story → 3 Reasons Why You Should Be Paying Attention to Moral Mondays in North Carolina