“Grotesque” is the word the New York Times used in an editorial today to describe North Carolina politics. I can think of some others.

In many ways, what’s happening in North Carolina is not entirely different from what is happening in places all over the country. In North Carolina as in other places, legislators are investing immense time and resources on abortion policy that intervenes in “problems” that are political phantasms, while their constituents are navigating fundamental problems like hunger and access to basic health care. Education is being gutted in many states. And in what appears to be a desperate attempt to hold onto power, the Right is relying on some tried and true strategies that have the effect of un-democratizing democracy by limiting public protest and constraining political participation (through voter ID laws and a tax on parents’ of college students who register in college towns). (In North Carolina too, moneyed interests are at work buttressing policymakers’ efforts by labeling some forms of citizenship as, perhaps, too citizen-y.)

But what’s happening in North Carolina is unique too. One of the most prized public higher education systems in the country is undergoing slash and burn style cuts that threaten its longstanding status as truly exemplary. North Carolina is the first state to eliminate federal unemployment benefits. The Racial Justice Act, a groundbreaking piece of legislation, has also been repealed too. Let’s review: Educational opportunity is steadily disintegrating, at the same time that social support systems have been dismantled. Oh, and “we’ve” also taken on a “Who cares?” attitude toward the fact that the death penalty disproportionately kills more Blacks than whites due to sustained racial bias.

I could go on. 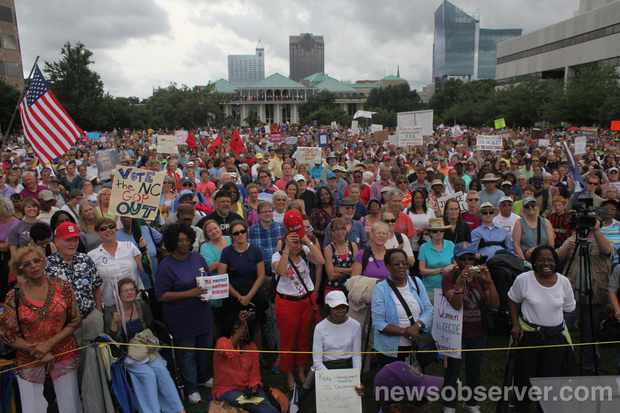 But in North Carolina, weekly Moral Monday protests have been growing since April. Reverend Doctor William Barber, the state’s NAACP President, has spearheaded and sustained civil disobedience that has called out thousands of protesters and led to hundreds of arrests. The sheer mobilization of people achieved by Moral Mondays is incredible and inspiring. But what’s happening in North Carolina is worth paying attention to for three additional reasons.

1.News coverage has incorrectly reported that this past Mondays’ protest revolved around the North Carolina General Assembly’s recent abortion related efforts. The policy aims is to reduce access to one clinic in a state with a highway that stretches 604 miles from border to border. Surely, many protestors cared about reproductive justice, a site of struggle in which abortion is only one facet. But protestors were there to speak up about higher education, gerrymandering, the racism deeply structuring the criminal justice system, unemployment benefits, policy that directly attacks the lives of people with disabilities, the sustained exclusion of LGBTQ North Carolinians from any state recognition, pay increases for the NC Cabinet, and privatization of city and county resources. (It’s always worth considering when and under what circumstances “big government” is demonized and when it is strategically deployed.)

I know the range of issues protestors were fighting against because I was there. The conversations that happened on the bus ride from Asheville, North Carolina to Raleigh were wide ranging as people articulated how voting rights, redistricting, and abortion policy are connected to environmental sustainability, family wellbeing, and racism. Participants whose political engagement tends towards a single issue (or maybe two) are articulating a seemingly newfound understanding of the importance of coalition building. Moral Mondays represent a significant moment in contemporary political struggle wherein single-issue politics are giving way to a deep understanding of the interconnectedness of social issues. 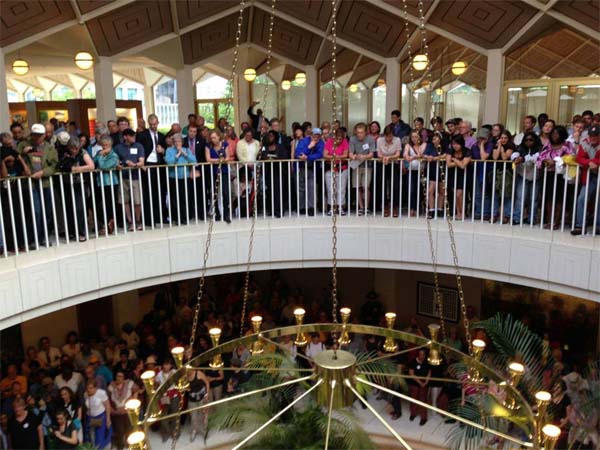 2. On Moral Monday, protestors moved from the lawn outside the Legislative Building into the rotunda that bridges the House and Senate chambers. Police gave protestors a five-minute warning to vacate the premises. A select group stayed and was subsequently arrested. I was not a part of that group. As I made way toward the exit at the two-minute warning, I passed an Ob-Gyn entering the rotunda, the area in which arrests would promptly begin. I knew she was an Ob-Gyn because she was wearing her white doctors’ coat embroidered with her name and professional affiliation. I do not know if she was arrested. But her visibility at Moral Mondays demonstrates something significant.

Public employees in North Carolina and in other states face limits on political engagement. For example, there are rules for university faculty about using official email to raise campaign funds or running for public office while maintaining a university appointment. Reminders about these limits produce, perhaps unintentionally, an ambient fear about political participation. The effect is disengagement. By wearing her physician’s jacket, the woman I saw was protesting not as a “Democrat” or a liberal, a progressive or a radical, but first and foremost as a doctor.

Doctors are charged with patient care, and when polices impede their ability to meet professional obligations, contesting these policies is not simply a political intervention but rather a professional one. As a professor (and a UNC system alum), I am watching changes unfold at a very real cost to the students I am charged with teaching and mentoring. My duties involve skill building and advising towards graduation, but cuts that decrease faculty-to-student ratio and increase tuition costs undermine these basic professional responsibilities. Moral Mondays are shifting the profile of protest. While fears of being branded a “radical” have cultivated a culture of apathy, protestors are dispensing with ideological discourse to demonstrate the ways in which public policy is an affront to the professional obligations tied to many forms of public employment.

3. Recent Supreme Court decisions make one fact abundantly clear: Region matters. The rights and protections afforded to United States citizens vary, sometimes drastically, by place. The DOMA ruling transformed everyday life for some LGBTQ people. But for those living in states with Constitutional bans on marriage and limits to equal protection, life remains largely unchanged. So, too, the verdict on the Voting Rights Act reminds us (and also disregards the fact) that U.S. history does not evenly impact contemporary life state by state. The legacy of Jim Crow is alive and well in the South—where disproportionate incarceration by race and a massive rate of (white) private schooling reproduce racial inequalities in economics and health in ways shockingly unchanged from a century ago.

At the same time that North Carolina is cutting higher education, Oregon announced a plan to make college tuition free. At the same time that the North Carolina General Assembly destabilized life for the unemployed, the Vermont legislature was broadening eligibility for free lunch, providing augmented heating subsidies to poor Vermonters, and increasing the funding for state mental health facilities. Moral Mondays are a vivid reminder that “progress” is distributed unevenly and that it is critically important to focus on region as a vector of inequality and oppression. We need allies from states where flourishing is happening to help us combat the rampant destruction to the great state of North Carolina. 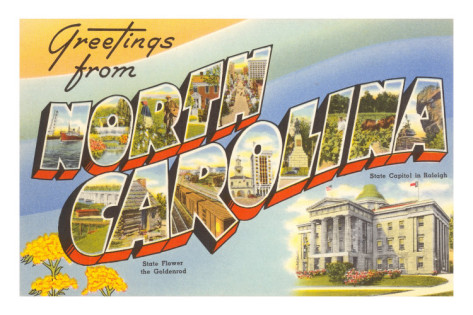 On Monday afternoon, the walls of the Legislative Building reverberated. “This is our house. This is the people’s house,” we chanted over and over again. North Carolina is reminding us of what happens when good people stop paying attention, and Moral Mondays are reviving a collective memory about what real democracy depends upon.