I went on a date on Christmas day. We went to the Black Cat’s “James Brown Death-Mas” party. My date was a fairly-strapping man, well-known in certain sections of the D.C.’s learned-artsy community. He had been sending not-so-vague hints of his interest in me for about two months prior to this outing. I was just coming off of a bout of bronchitis so I had been a shut-in for a few days; and if I’m completely honest, I went because I was bored and sometimes, it is a nice thing to have your company – hopefully, more than other things – desired.

We moved from one venue to the next, and had more drinks in Adams Morgan.  We kissed; I felt nothing. We left Adams Morgan and instead of him driving me back to my house in Petworth, we headed further East to his. Herb Alpert’s “Rise” filled the high ceilings of his loft apartment. I sat a distance away from him. He offered me food that he had cooked earlier that night – lamb chops, mustard greens and mashed potatoes that tasted as though they had come out of a box. The food came back up not long afterward. I suspect that I had a little too much scotch too close to my last dose of antibiotics. I went to the bathroom threw up silently and lay down to sleep off my drunkenness.

Although I had a very clear recollection of falling asleep wearing my shirt and underwear; I woke up naked. I was equal parts stupefied, frightened, and angry.  He too was naked. The first words I could muster were “Where are my underwear?”  He replied that they were not “a chastity belt.” I can remember wanting to cry but not being able to. I got up and found my underwear wherever they were in the room. At some point he made reference to me “tasting good.” I asked what happened, he asked if I didn’t remember and I said that I didn’t. He said something along the lines that he wouldn’t tell me because I needed to learn a lesson. He got out of bed and did pull-ups on the exercise bar in his bedroom. I remember thinking that he was svelte and handsome but, more importantly, quite the monster.

He took me home. He asked when he would see me again. I couldn’t believe my ears. I asked him if he saw nothing wrong with the fact that I woke up in a different stage of undress than the way I went to sleep. He said verbatim: “I would undress you again.” As far as I was concerned that was going to be the last conversation he and I ever had. There was no way I was about to waste energy explaining that on no level is it okay to undress someone while they are sleeping, in various stages of inebriation, and/or unconsciousness without their explicit permission. I felt like he wasn’t even worthy of my anger, any more words, or energy for that matter.

Are there varying degrees of rape?  Or is rape just rape? Is it rape regardless of how far into the act your “no” comes? What if you don’t know if you said “no,” because you’re unsure of what happened at all? Is that rape too? Because I couldn’t definitively say what had or hadn’t taken place I decided that I couldn’t go to the police. I imagined being asked questions like “What if you came onto him and you can’t remember?” and other decidedly-asinine things that I knew I couldn’t necessarily answer. As a victim, I imagine that you would need to be able to say what happened and I could not do that. It felt like I had been rendered powerless over my own body for those hours.

I spent a few days being angry at myself. There are lots of arguments that can be made about what went wrong that night. No one can tell me of an angle that I haven’t already thought of. I shouldn’t have been out with him in the first place because I could tell there was something a little too wild in his eyes well before that night. I shouldn’t have had that much to drink. I should have made him take me home. But in making those statements was I saying that whatever did or did not happen was entirely my fault? The “should haves” and “should not haves” weren’t going to change anything. The truth is in some ways it was as much his fault as it was mine. Where was the man’s behavior in all of this? Where was his conscience? His decency? His honor? I found myself wondering how many times he found himself in such a position. To be so ardent that he ‘would undress me again,’ could that mean he had indeed done it again, and again to other women? If there had been other women who woke up in his bed as bewildered as I was that morning, what did they think?

I remember seeing him out about a month before with another woman. She was shitfaced and they were all over each other. I saw them one moment, and the next it looked like they disappeared to the bathroom. Later that week he said to me: “Had I known you would be there I wouldn’t have brought her.” Had that woman, and others like her, felt lucky to be in the bed of a man-somewhat-about-town? Had they been happy to wake up undressed? Did any of those things matter? They did because their acquiescence allows him think that what he does is ok. Although I’m almost certain that those women are out there – I knew for sure I wasn’t one of them. I started imagining him as an incubus-type character. My “maybe rape” was not transactional – he didn’t get to keep any of my power unless I allowed him to. While he kept none of my power, I would keep none of the shame his act. Nor was I going to allow myself to be consumed by resentment and anger directed toward myself or other men.

A little over a month later I was out at an event and spotted the incubus. I hadn’t spoken to him at all since the day I last saw him. As soon as I saw him I made a bee-line in the opposite direction to get as far away from him as possible. Later in the night while I was talking to a friend (who knew about the situation) he came over and started talking to me. It amazed me that he didn’t seem to notice that I was already quite obviously having a conversation with someone else. I finished my conversation with my friend and eventually turned to face him. He said “You look nice as always.” I said “Thank you,” making no effort to continue a conversation. He continued and said “I almost missed you.” I don’t know if it was meant to be an insult but I could barely manage to look at him at all, let alone be offended or respond. If I hadn’t reached out to him in the 32 days that had passed what on Earth made this beast think that I gave a flying fuck if he missed me or not; never mind that I don’t know how he could miss someone he’d only spent a few hours with once. How people manage to walk around so profoundly and painfully un-self-aware I will never know. My friend said after the exchange that I acted “demurely.” I explained to her that he did not get to provoke an outburst of rage. Quite simply, he was not worthy of the energy I would have had to expend to flip out on him.

In the handful of times that I’ve talked to friends about this incident the first thing some of the males said was some variation of “Are you sure you didn’t come on to him in your sleep?” The question is not only offensive, it is also quite possibly the most idiotic thing I’ve ever heard. Why is the insinuation of disbelief and/or provocation always looming for victims? I wondered if there wasn’t some unwritten rule that men (and women) think exists that says that once behind closed doors with a member of the opposite sex the person with the penis is owed something. Why else would that come out of a person’s mouth? Regardless of how well you and the other person get along; regardless of how much chemistry there is; regardless of whether you’ve even had enough time to figure any of that out; regardless of how scantily clad you may or may not be – the prevailing wisdom is that women should be prepared for sexual advances. Who are we?

The incubus thinking that he should be able to walk over and have a conversation with me brings me to another point. I often find that, in popular culture men seem to think that women must comply with their every whim. I suspect there are multiple root causes of this – one being popular Judeo-Christian culture’s bent toward the male as the progenitor of power. I’m quite far from being a male-basher but I am aware of the ways male privilege and patriarchy are reproduced and reified on an everyday basis. From the cat-calls on the streets of urban cities where men demand that women, who are perfect strangers, smile or come hither like puppies, to the grabbing of women’s appendages in more closed social settings – the entitlement is rampant. The same double-standard is at work when women who dare enjoy sex for the sake of their own enjoyment, or engage in sexual relationships with men who are married or otherwise-committed, are branded “hoes,” “whores,” and so on. Yet rarely in the public consciousness is a man, who does the same, similarly labeled. It isn’t just about perceived virtue, or lack thereof; it is about the fact that these women dare step outside of the gender roles assigned to them.

Why are women shamed when they are attacked by rapists? Possibly, because based on a reading of popular culture, they are playing their roles incorrectly. Why is disbelief of rape victims standard? The same aforementioned reason. What sort of culture do we really live in, where it assumed, by not just men but women too, that a woman loses the right to her body upon passing the threshold beyond a certain hour? The answer is one that is not nearly as equal, fair, or just as we pretend it is. 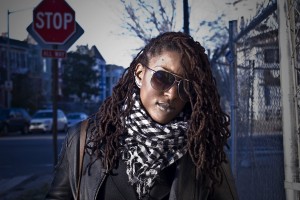 Niama Sandy is a London-based Brooklyn-transplant of Caribbean heritage. She is a force to be reckoned with in any creative arena she sets foot. A graduate of Howard University’s illustrious School of Communications and current masters student in the Anthropology department at the School of Oriental & African Studies (SOAS), Niama is a lifelong creator, lover, and patron of the art of life. Her interests cover a broad range of topics including music, art, the African Diaspora, the constructed nature of history, race, gender, economies (and the nation-state), and their social and political implications on everyday life.