AVERAGED is a collection of photographs and personal histories taken in Andhra Pradesh, India. The documentation of stories and images in the exhibit directly challenge data published by international organizations like the United Nations, especially with regard to the Millennium Development Goals (MDGs). I hope that everyone who views the collection will be left thinking critically about how societies and organizations create entire unseen populations.

What does it mean to be averaged, to become a number and part of a statistic? Who becomes the invisible population through statistics controlling for outliers and smaller, “statistically insignificant” individuals and communities? At what cost does an individual become an outlier, and can we just disregard entire societies because there are “not enough” people suffering? Or maybe are there too many, and these will skew our perfectly constructed data? What are the greater implications of overly positive and simplified data?

Lastly, I hope people can think about real solutions to improving the world around us—in our own individual human orbits, however great or small.

This collection of photographs and stories is being shared by request from the individuals I photographed, who feel that they are silenced, or averaged, in one way or another. Namasté. 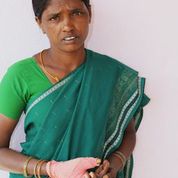 “According to a study in India, a woman loses an average of at least 5 paid work days for each incident of intimate partner violence.” (UNIFEM, Violence Against Women and the MDGs, 2013)

Laxmi nursed her hand as she told me her husband beat, raped, and left her naked in the street with chili powder poured on her open wounds just the night before. Through her anger, she justified her husband’s abuse. She explained that she had gone to work the day before in the fields, and on her way home she purchased some food and extra water for their five children on a particularly hot day. Between she and her husband, they made $15 USD a month, barely enough to keep up her husband’s bad habits. Because of her wounds, nobody would hire her the day we spoke, and she was certain her husband would beat her again because she wouldn’t bring home any money that night. 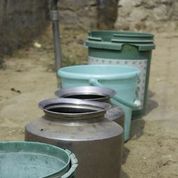 “The world has met the target of halving the proportion of people without access to improved sources of water, five years ahead of schedule” (MDG, Target 7.C, 2012)

Nilu, the Telugu word for water, is a Dravidian word with its roots meaning survival and waiting. This is the water queue for the week in one particular slum village; they are one of the fortunate villages with their own water well. Each family, if they don’t run out of water, gets a bucket-full for an entire week to use for sanitation, food, and drinking purposes. 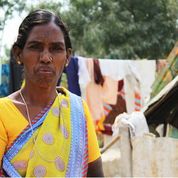 “The Right to Walk at Midnight”

THE RIGHT TO WALK AT MIDNIGHT

“[The MDG framework] did not include violence against women and girls even though it impacts on all sectors in the goals. Gender based violence has direct implications for progress on all the MDGs because it impacts on girls’ and women’s access to education, productivity, health and well-being, HIV transmission, and it can lead to increased poverty. However, it was not incorporated into the MDG framework even though addressing gender based violence is fundamental to realizing the specific MDG3 to promote gender equality and empower women.” (The Irish Consortium on Gender Based Violence)

In our interview, Andalu said, “Women have the right to walk at midnight—I don’t want anyone telling me where to be, when to go to the bathroom, or what to wear anymore.” She has been raped violently so many times during her trips to use the bathroom or fetch water (typically during the early morning or late at night before or after her field work), that she has a permanent fistula, and no access to healthcare. Because of her fistula, her husband left her with her two daughters, who she worries about daily because she cannot protect them from what has happened to her. 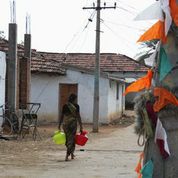 “The proportion of people without access to safe drinking water has been cut in half, with wide-ranging benefits for many, including women and girls who no longer need to spend their days collecting water for their families, and have clean water to fight disease and infection.” (Michele Bachelet, UN Women President addressing MDGs, March 2013)

A school-aged girl on her second trip of the day to fetch water for her extended family—4 kilometers roundtrip. 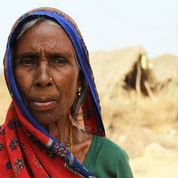 Ansuria, the matriarch of a small Lombadi hamlet, was experiencing pain near her ovaries about two years ago, when a local doctor suggested she receive an unnecessary hysterectomy. Even after the surgery, she continues to bleed and experience pain, but is now unable to work due to her wounds, and has tremendous amounts of debt to pay to an unskilled local doctor. Villagers have turned their backs her, on one of the most important members of their society, because of the embarrassment she has caused them. The guilt and pain she experiences daily have caused her to try to take her own life twice in the last two months. 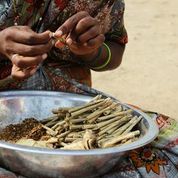 “Efforts focus on guaranteeing equal social protection and employment rights for all, whether in the formal or informal economy. UN Women also helps expand paid work opportunities for women, which often ushers shifts in gender relations, greater sense of self-worth and societal respect, a say in critical life choices such as postponing the age of marriage, a greater role in household decision-making and ability to speak out against abuse.” (UN Women website, “Momentum towards meeting the MDGs: 1,000 days of action remain,” April 5, 2013)

After an entire day of brickwork in the city, Remila has to come home to make bidis under her husband’s supervision. She is forbidden inside of her home, where she could be protected from the 120-degree sun, until she is finished rolling and selling enough bidis to please her husband. 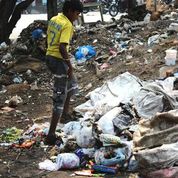 “Rag picker,” a local term, refers to a person who picks through trash to find items that could be valuable in any way to make money or find food and drinking sources. Such rummaging is not uncommon; most slum dwellers resort to rat picking when they can’t get daily wages, and often employ their children in the work instead of sending them to school. According to a local non-profit, SAPID, the average slum family in Hyderabad, India makes 1000 rupees a month, or about $20 USD. 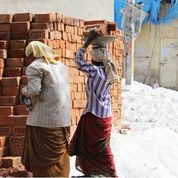 Reports are filling the MDGs of women in vulnerable work collapsing worldwide. The women pictured here are daily-wage laborers working in Hyderabad, India. Each brick weighs 3 kilograms, and they are expected to carry multiple bricks long distances, as shown. If they stop to rest or drink at all during their 12-hour work day, they are beaten or not given their daily commission at the end of the day. The men are allowed smoking breaks. 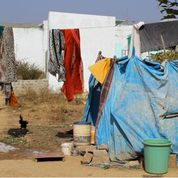 This is the home of eight family members with their weekly water allotment in front of their house. When I asked them about their sanitation and water situation, the matriarch said to me, “We’ve been eight years without a toilet and water, we can wait two more if we have to.” 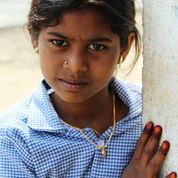 “The median age of marriage is rising over time in every region.”  (MDG Gender Chart 2012)

“If child marriage is not properly addressed, UN Millennium Development Goals 4 & 5 – calling for a two-thirds reduction in the under-five mortality rate and a three-fourths reduction in the maternal deaths by 2015 – will not be met, says the UN.” (International Women’s Day Spotlight: Child Marriages, Asian Scientist, March 2013)

Jyoti has just been married off at the age of 9. Her responsibilities now include upkeeping of their house, fetching water when appropriate, cooking, cleaning, and childbearing and rearing. She is not allowed to attend school, but wears her hand-stitched uniform in secret while her husband is out doing daily wage work. 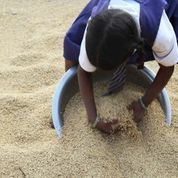 “The world has achieved parity in primary education between girls and boys.” (MDG Report 2012, pg. 4)

At eight years old, Kathroth has to stay home and work on the harvest while her brothers are allowed to attend school. She wears her school uniform as a silent protest against her father who watches over her work diligently; she knows if she speaks out she will be punished physically. When I asked Kathroth about her dreams and goals, she answered, “What now do I have to tell you about my future? This is my daily torture.” 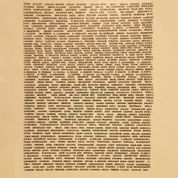 “The literacy rate jumped from 52 per cent in 1991 to 65 per cent in 2001. The absolute number of non-literates dropped for the first time and gross enrolment in Government-run primary schools increased from over 19 million in the 1950s to 114 million by 2001.” (UNICEF MDG Report, India)

These are 678 names of children (aged 6-14 only) in one small region of Nizambar, India, who are not in school for one reason or another—bonded laborers, denial of school enrollment due to caste, commercial sex workers, forced to join the circus, field workers, child marriages, no access to schools, etc. 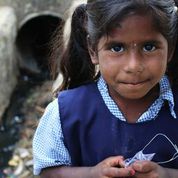 “Globally, there has been progress in reducing girls’ exclusion from primary education, with the female share of out-of-school children in developing countries dropping from 58 to 53 per cent between 1999 and 2010.” (MDG Report 2012, pg. 18)

Unchaahi, meaning “we did not wish for her,” does not know her age, which village she was born in, or her caste because she has been sold too many times since her birth. Her last two owners have sexually abused her and upon telling each of their wives, she has been severely beaten and then sold. Currently, the family she works for doesn’t allow her to attend school, so she performs all of her labors in a hand-made school uniform, made together with Jyoti (previously pictured).

Brook Dorff’s most recent adventure involved graduating from the MA program in Social Justice and Human Rights at Arizona State University (ASU). Her academic work has centered around social media, health statistics and GIS, body image, women and children, HIV/AIDS, Latin America, and most recently India (after having lived there for 6 months). She is half Chilean by birth, a public health specialist by trade, an artist by passion, and a full-time feminist and activist. Her next pursuit will be starting a Ph.D. in Global Health at ASU in the fall. Brook believes the best education comes from traveling, a good conversation, and doing things that make you uncomfortable.