Proximity and the Shifting Contours of Belonging – The Feminist Wire

Home / Family / Proximity and the Shifting Contours of Belonging

Proximity and the Shifting Contours of Belonging

One decade is a long time. Ten years. One-zero. It’s the beginning of the next digit. A transition.

One decade is a vast space. Constantly shifting, warping into different shapes, rolling across landscapes.

One decade is a great distance, yet unpredictably proximate.

It will be one decade this fall. One decade from the second the plane took off from the Bangkok International Airport with an unexpected date of return. Ten years from the moment I began counting down the days until I would be home again.

North America. The West. I was transplanted to the center of empire.

From this other side of the world, home seemed so far away, behind a curtain of white mist I wasn’t able to locate. “What the hell is T#@!land?” “So tell me more about Taiwan.” “Do you know what chewing gum is?” “Are there washing machines there?” “Can you eat cheese?” Bits and pieces of home came in Walmart toilet paper packages and bags of potato chips, like an exquisite corpse. Unrecognizable silhouettes. Sometimes I didn’t know where I was from anymore, or, for that matter, where I was supposed to be from. If there weren’t those hardcover picture books full of images of gold-leaf temples and blue-water beaches that my Thai-born Chinese parents forced me to bring along for show-and-tell purposes, I probably wouldn’t exist, or know how to exist, at all.

My body was floating in space, ready to be explored.

Along with those colorful picture books, I brought a Thai musical instrument called “sor-oo” but didn’t get to play that much. I spent more time describing it than using it. I told people that it was a Thai violin that you had to play sideways. But because my English wasn’t that great I had to do hand gestures to explain—left fist at my neck level and right hand moving sideways back and forth underneath. Some white boys were amused by it. They thought I was demonstrating how to fuck.

Thai students were encouraged to bring with them some sort of “cultural artifacts” and, especially for Thai girls, learn a song of Thai dance in case they would get a chance to perform at school cultural nights. People thought Thai costumes were pretty. “They’re just like kimonos, right? […bow…]” A fellow soccer teammate told me that I should wear a Thai dress for senior prom. The thought of wearing a sabai disgusted me when I found out I was obligated to go to prom with an ex-boyfriend who thought it was funny to call me “Porn” (shortened from my birth name Tanyaporn).

One time someone yelled “THAILAND!” I turned around because I instinctually knew they were calling me. That person just forgot my name.

Some foreign students were puzzled by my face. “Why do you look so Chinese?” I just laughed it off and said I don’t know. My mother kept telling me when I was growing up that I was only 25% Chinese. She said she was 50% Chinese because she could speak a little bit of Teochew and that my brother had no share of Chineseness because he was born five years after me. I accepted her logic wholeheartedly and was offended when anyone told me I looked Chinese. I would say my great-grandparents were from China, but I got nothing to do with it.

I had the hardest time hunting for Thai food with recognizable taste during the first couple years abroad. Even though I hated Thai food so much, especially what is now known as the famous pad Thai, I would get nostalgic cravings sometimes. In first grade, my parents put me in a public school near our house in a working-class neighborhood, and at lunch the mean kitchen custodians would be serving us spicy soups and rice in half-washed dirty aluminum compartment trays. They loved yelling at us to be quick and silent as the endless line of hungry kids moved along like a millipede. That was my first taste of Thai food. Soggy brown noodles. Coconut milk soup with specs of floating chili flakes. Sticky soybean dessert that looked like mucus. Well, at least one good thing about lunchtime was that after swallowing those things I knew I’d be out of this hell in half a day.

I was obsessed with Charlie Brown. I was Charlie Brown in fact. Besides it being the first English-speaking cartoon I was introduced to (my father thought it was a good idea to familiarize his daughter with American culture early on), Charlie Brown was someone I identified with and eventually came to embody. The kids at my elementary school thought I was speech impaired. “Pen bai ror?” “Tanyaporn pen bai. Tanyaporn pen bai jing jing ror?” “Pood noi si.”[1] Even the teachers were frustrated with my few words. “Pood bang si. Pood arai kor dai.” “Tam mai ngiab jang?”[2] If I weren’t the smart kid that my classmates asked to copy their homework from, I probably would have lived in absolute hostility from all the encouragement to speak. “Tanyaporn pood dai duay ror?”[3] My body was revolting its own existence, just like how it turned on Thai food. “Pood.” “Pood.” “Pood.” “Pen dek roon mai tong pood yer yer.”[4] Everyday I longed for the comfort of the fried egg over steamed rice that my mother made.

I once had tom yum kung that tasted like overdue coconut milk dessert on Vancouver Island. Other than that, “Thai” was just a variation of some greasy Chinese fast food. Who could imagine that less than half a decade later, Thai food would become such a fad? Being Thai definitely gives you an edge these days. “Your food is so good.” Really? We just met, but thanks. “You know about this new Thai restaurant down the street? Their pad Thai is delicious!” Oh, cool. “Your mom’s cooking must be so spicy.” Well, not really. First of all, she barely cooks. Secondly, if she feels like cooking, her best dish is the fried egg over steamed rice that has no air of chili in it. All of a sudden, home appears at a proximate distance. Unrecognizable silhouettes, still. 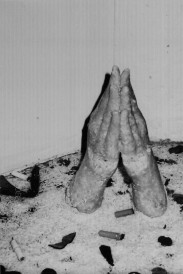 Proximity is not just about spatial distance. It’s a kind of temporality. A practice.

One summer in the Bay Area, I found myself in a tragic pink sarong dress waiting tables at an award-winning Thai restaurant. What was more tragic was the owner’s male chauvinist son who loved wagging his “working-class” masculinity in everyone’s face. For some god-forsaken reason he fired me on that first day because I seemed like a rich kid who didn’t know how to work the kitchen. Suppose I could have learned how to be a good waiter from his messy half-assed-English-broken-Thai stories of picking up some girls at a karaoke bar every night.

A good friend of mine at the Thai temple in Berkeley had genuinely and tirelessly been on a mission to figure out what I was. “So you like boys or girls?” I never had an answer for him. He was the sweetest person I’d ever met who was willing to learn all the terms I considered myself to be, though he would soon forget most of the things I said. I rarely got to see him these past few years, but every time we met, he never failed to evaluate my appearance in order to guess what phase I was going through. “You’re growing your hair out? So you don’t want to be a man anymore?” Despite our conversations and my fluctuating gender presentation everyone at the temple loved teasing us. Of course, why would two opposite sex people enjoying each other’s company so much not be dating?

A few weeks ago, my partner and I went to a Thai massage parlor down the street from our place in mid-city Los Angeles. Since I moved to LA (a.k.a. Thailand’s seventy-seventh province), I’d become more aware of when to out myself as Thai. My partner said I should just speak Thai in case we would get a discount, but I was already nervous about the idea of being semi-naked in front of Thai people. When we got to the parlor this petite Thai masseuse I assumed to be the owner came to greet us. Luckily my partner and I were roomed right next to each other with a short wall in between. I remained indecisive whether to talk to the masseuse in Thai until she said, “Miss, could you please take off your shirt?” I couldn’t stand it so I cut her off. She apologized for not knowing that I was Thai and proceeded to ask me who I came with. I felt her twisting my right leg, then pulled. I paused. The masseuse asked me again, “Is she your friend?” Tired of lying I told her that the person in the next room was my fan (partner). With a thinking face she let out “Oh, I see…”

Choice is such a tricky concept. Usually I’d rather gender myself than being gendered by someone else. I’d prefer saying “ka” and “nu” (feminine ending/ first-person female pronoun required for polite speech) than being “ma’am-ed” or “miss-ed” by strangers. I have no desire to measure what is more damaging. Languages are violent. You choose what type of harm you prefer to endure at different moments.

Proximity is a practice.

As the one-decade mark approaches, the previously unrecognizable silhouettes are suddenly gaining legibility. The terror of nearness burns underneath my skin. “Tam mai ngiab jang loey?”[5] The language of nostalgia makes me hesitant to speak. “Pood bang si. Pen dek roon mai tong pood yer yer.”[6] Bits and pieces of home come floating like a puzzle I no longer want to assemble.

Thailand: the land of the free. No colonized history. But the national boundaries were drawn by colonization. So are the contours of my body.

Over the past few years I’ve felt my face crinkle by any invitation to a Thai restaurant. Living in the seventy-seventh province I’ve got no right to complain about proximity. Home is just down the street. Around the corner. Upstairs. Yet I have no access to it. I exist in the language that no one understands. A space that no one sees.

One decade is a transition. A space constantly shifting. A great distance, yet unpredictably proximate.

Last spring my mother complained to me about how uncomfortable she was to be invited to our neighbor’s daughter’s wedding ceremony. It was around the time of Songkran (Thai New Year), so they decided to combine both celebrations. “I don’t know what to do.” My mother panicked. “I don’t know what Thai people do. I’m afraid I’m gonna do something embarrassing.” I told her to calm down and go with the flow. “You probably would just have to pour some water on their heads and wish them good luck, I guess.” I had only read about the Thai New Year ceremony in textbooks and actually never been to one until I arrived in the U.S. This incident happened right after my mother’s fifty-fourth birthday, and she’d been living in Bangkok all her life.

[6] “Say something. The new generation must talk a lot.” 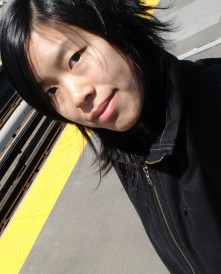 Bo Luengsuraswat is an interdisciplinary artist, writer, and activist. His work has appeared or is forthcoming in The Critical Ethnic Studies Anthology; nineteen sixty nine: an ethnic studies journal; Gender Outlaws: The Next Generation; Plenitude Magazine; freitext; and Dreamers Adrift. His most recent work can be found at here. “Proximity and the Shifting Contours of Belonging” previously appeared in Troubling the Line: Trans and Genderqueer Poetry and Poetics, ed. TC Tolbert and Tim Trace Peterson (Nightboat Books, 2013).