COLLEGE FEMINISMS: Capitalism: The Good, The Bad, and The Ugly – The Feminist Wire

Home / College Feminisms / COLLEGE FEMINISMS: Capitalism: The Good, The Bad, and The Ugly

COLLEGE FEMINISMS: Capitalism: The Good, The Bad, and The Ugly 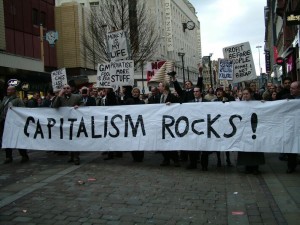 A few months ago, The Catalyst, an independent student newspaper published at my school, Colorado College, published an article entitled “Why I Love Capitalism, and Why You Should, Too!” To be clear, I don’t exactly hate capitalism. Go on, you capitalism lovers! Buy your new iPhone! Spend your money! I participate in our country’s economic system, and can’t complain so far. I personally am doing just fine with it, particularly since I am privileged enough to have parents with steady jobs that pay well. But that’s just me. Many people are not doing fine due to myriad factors. For these reasons, I think it’s important to recognize that this system is not perfect; capitalism has many flaws and problems just like any other.

To begin, I took note of a lack of empathy in this article. What the writer doesn’t seem to realize is that many people get left behind. She writes, “People do not wake up and decide to work 70-hour weeks for fun.” This is very true. Many people work that much because they have no other choice. To put food on the table and to pay rent are just a few reasons that people choose to work that many hours. A study conducted by the California Budget Project determined that a two-parent family requires both parents to make an hourly wage of approximately $18.00 per hour, setting their annual income at $75,500. What’s the minimum wage in California?  A whopping $8.00 per hour. To top it all off, the median household income from 2007-2011 was $61,632. So, half of California’s population is not meeting the $75,500 income mark, according to the U.S. Census Bureau. While capitalism is perfectly fine for those families that make $18 an hour or more, it doesn’t seem to be working for those who are unable to attain this hourly wage. 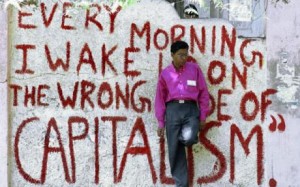 As well as ignoring the issues that are a true problem for many Americans, the writer failed to fact-check when discussing other economic systems. She writes, “North Korea and South Korea provide a phenomenal example of how free markets can create prosperity.” No offense to North Korea, but last time I checked, it was not a shining example of prosperity or capitalism, and the CIA’s World Factbook concurs. Additionally, as noted on the North Korea Now website, North Korea has been struggling with mass starvation and food shortages. While it was most certainly worse in the 1990s, it is still a very significant problem for the country today. According to The World Bank, average life expectancy in the United States is 78, while in North Korea, it is 69. The World Bank also identifies North Korea as having a “low income” level compared to other countries. Mass starvations? Low income? This doesn’t sound like a prosperous capitalist country to me.

Meanwhile, China, a politically Communist country is quite prosperous, according to Robert B. Reich. China also happen to be a capitalist society. That’s right. They are politically Communist but economically capitalist. Capitalism and communism are not always mutually exclusive. Being a capitalist society does not make you a democracy, and being something other than a democracy does not mean capitalism is no longer an option. At the same time, China is also having problems with poverty, as the writer notes. In that case, a country can be capitalist and also have poverty issues, which contradicts the idea that capitalism negates poverty.

I wrote this response in order to point out that capitalism is a multifaceted system that we should critique, especially as we take advantage of its benefits. It might be, as the author of “Why I Love Capitalism” points out, “absolutely shocking how ignorant [Colorado College] students can be” by simply saying, “Capitalism is bad.” However, to ignore some of its key problems is also truly ignorant.  More nuanced analyses would be appreciated on both ends. That said, I would like to thank The Catalyst for prompting such vehement discussions across our campus, even if the catalyst (pun intended) for said discussions read more like an angry tirade than intellectual discourse.
________________________________________________________ 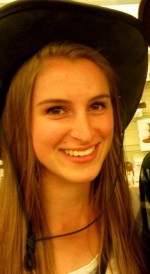 Ariane Beckman is an Environmental Policy Major and Feminist and Gender Studies minor at Colorado College. She hopes to continue learning more about feminism and its far reaches in today’s society while also understanding its place within politics and the environment. She is specifically interested in how sustainability can be employed in business and how new sustainability efforts affect people of different socioeconomic standings and cultures in unique ways.