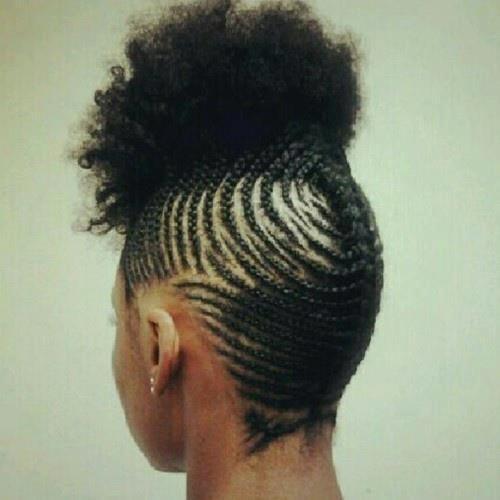 My central aim involves the politics of bodily performance, in negotiation with shifting realities of a post-Apartheid context, where constructions of gender, race and class are both mobile and stagnant… This project critically engages the role of popular culture in influencing youth cultures. In a context such as South Africa, such a project aims to shed light on the ways youth cultures are being constructed through negotiating meanings of popular culture within the dynamics of a political history. Within this framework, I was required to formulate a research project that would address some of the key issues involved in the constructions of young femininities within changing class and cultural contexts. I chose to research constructions of beauty as they are articulated through the politics of hair. I wanted to use the politics of hair as a lens into bodily performances, which negotiate political constructions of class, race and gender. By using the lens of constructions of beauty, I intended on critically addressing contemporary cultural constructions of femininity as embedded in discourses of popular culture. I focused on young black middle class women located in a post-Apartheid context. I argue that their post-Apartheid locations position these women in critical relationship to the dynamic meanings of class and race in which I am interested, providing nuanced ways of deconstructing understandings of gendered subjectivities (Haanyama, 2007). 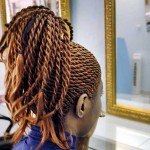 Many years later since I boldly went where I did not expect to go, I am reviewing, de-constructing and trying to make sense of what still feels like a big deal: black women’s hair. And specifically what the “practices” of our hair mean for our subjectivities. I started out my research wanting to better understand what goes on around black women’s hair — the fascination, the appeal, the policing, and the overall vigilance. And as someone who is and will always be deeply invested in black women’s lives, this seemed to be an interesting angle to explore. 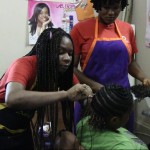 Elizabeth Sintim does a customer’s hair in her Ladies’ Choice Salon in downtown Grahamstown. | Photo by Ashley Kang

I named my previous research, “Untangling the knots: Understanding the hair politics of black femininity in a post-Apartheid context” precisely because it seemed to me, conversations about black women’s hair were necessarily political. By political I mean, involving both power struggles and negotiations. The notion of performativity was key, specifically, how women perform their identities and how hair may sit central and critical to that performance. Several years later, and though my analysis has shifted, the intersecting experiences of deeply entrenched racial identities, class positions, and gendered constructions still tell us important things about how black women in post-Apartheid South Africa are shaping their lives — a lot of which can be understood using hair politics as a lens. Of course, I had not anticipated the nostalgic pangs I would have for the time and luxury spent deep in thought, about black women, hair, performance, race, class and gender. Though my time is spent with a different focus now, and though black women are still paramount to my thinking, I feel a deep sense of desire and responsibility to keep thinking, asking, talking and negotiating how our bodies are understood and felt.

A conversation about hair cannot be divorced from integrated understandings of the body: racialized, classed and gendered bodies, with adornments, perceptions of beauty, and contextual analyses of place and time.  Performances are necessarily political, raced and classed. Perhaps understanding contextualized performances may enable us to better understand why and how we do what we do and even further exercize our agencies through this lens. This is an important starting point, as too often attempts are made to isolate and make singular our existence; black, queer, female, poor, disabled, whatever the ‘defining’ criteria at the time. We have to fight against this actively and collectively 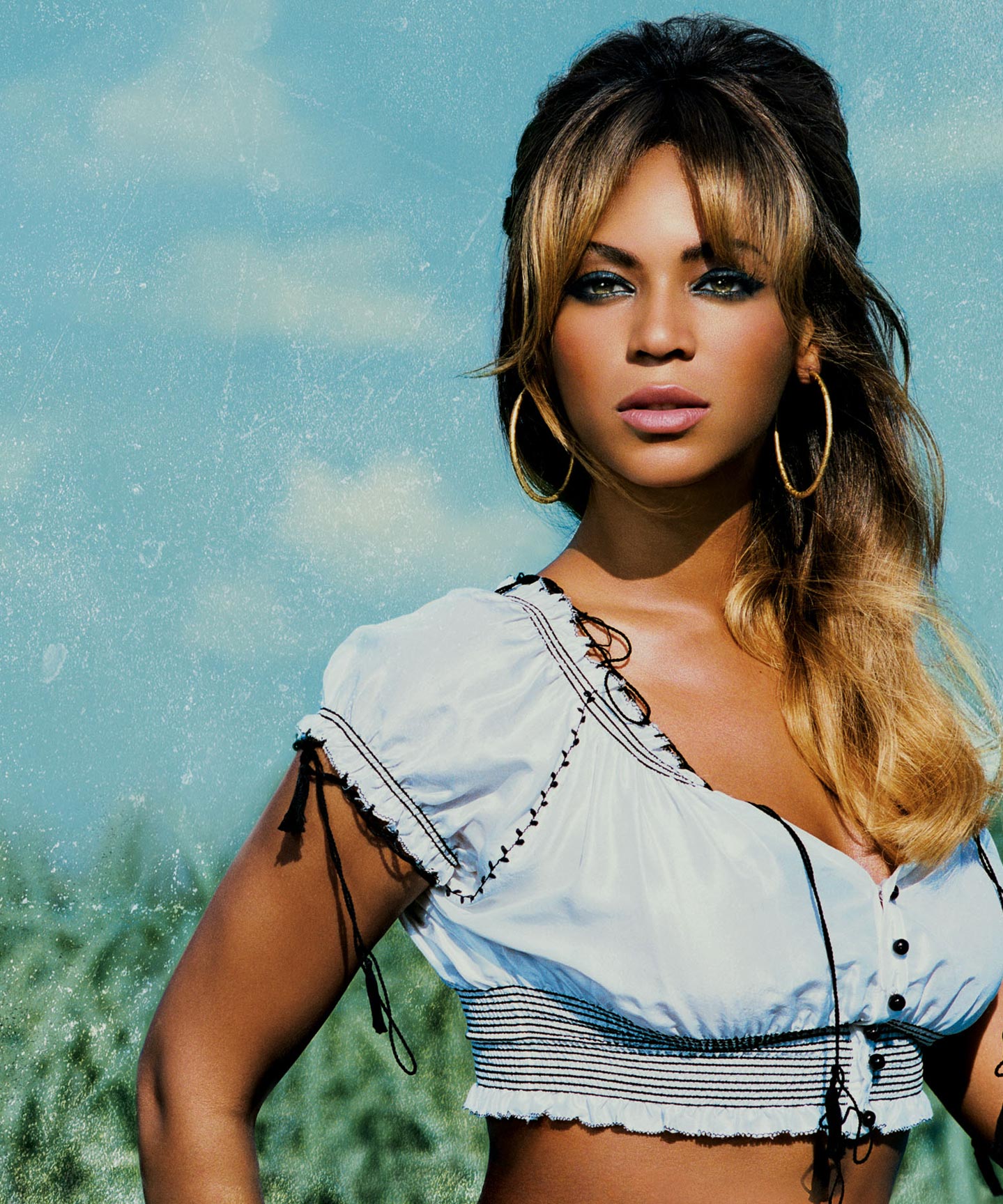 When conducting my initial research, the participants often stated that their hair aspirations were not about wanting to be white. This was a necessary assertion at the time particularly because weaves were becoming more and more popular among black women and the critique, which came with them, questioned the racialized aesthetic. The women I spoke with asserted that they did not want to look like Cindy Crawford, however, they did want to be, look like and emulate Beyoncé (this was the time of Beyoncé’s second studio album release, songs such as ‘Upgrade You’ and ‘Irreplaceable’ were hits and unequivocally established Beyoncé as a black music and fashion female icon).  Unfortunately, we often leave the debate there, forgetting to ask, who does Beyoncé look like, what does she represent?

I do not think it is simply a question of wanting to look white but indeed about understanding the racial and economic ideologies, which strongly suggest how black women should perform our identities. Hair, as a site for political contestation, creates subjectivities deeply inflicted by racial ideologies, which is something we are yet to fully acknowledge in public discourse. With the rise of black female icons in mass media, what kinds of images and bodies are asserted and what do they tell us about the shrinking space for diverse representation of black femininity?

A layer of analysis that I necessarily omitted when I first began my research was sexuality.  However, unpacking embedded African hetero-normative constructions of sexuality and how they weave into hegemonic notions would have allowed for a more nuanced understanding of hair politics.  Sexuality is embedded in discourses of performance through multiple, intersecting and contradictory lenses. And our bodies are often sites for this performance–sites of both struggle and lust.  Further, a discussion on the notions of performativity and sexuality, the negotiations and reinforcements, as well as the intersections of race, class and gender–and what all of this combined conveys to us about black women’s lives individually and in relation to one another–is needed.

There is a frightening vacuum of feminist knowledge concerning black women’s lives, performativity of our bodies, popular culture, beauty, and aesthetics, particularly in South Africa, but certainly throughout southern Africa. This was the case seven years ago when I initially began my work in this area and persists today, despite growing public discourses about beauty in this region. With little substantial feminist writing and thinking about black women’s bodies by black women, we do not have an extensive body of resources to assist us in untangling our imaginations and realities, which reflect one another. 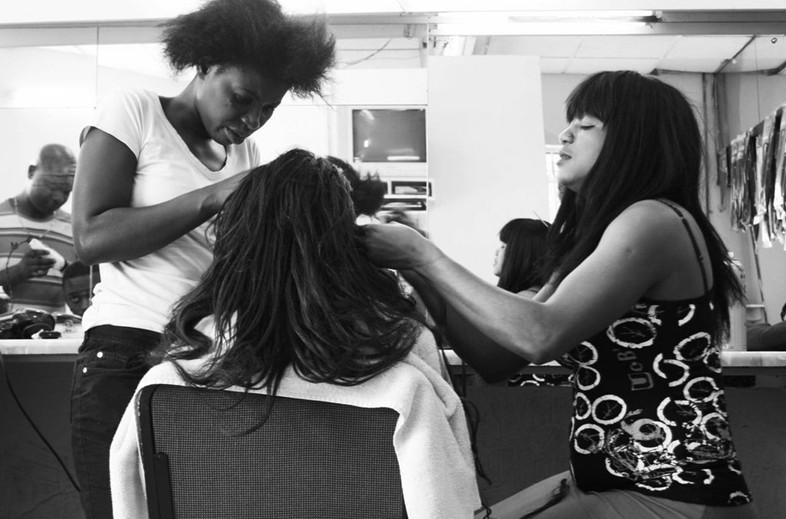 The political dynamics between black women is something I took for granted while conducting research on black women’s hair.  I didn’t look closely enough into the conditions of black female solidarity, loosely defined, in our social circles. The research was mainly conducted through focus groups. Though policing of behavior (both theirs and mine) was evident at times, I didn’t explore the ways women’s organizing has created rifts amongst us and often sustained by us due to our own unreconciled traumas. Policing, as I saw it, was the vigilant watchful gaze of women by other women, often to the ends of maintaining female respectability.  What might a nuanced understanding of hair politics amongst black women reveal to us about the state and nature of black women’s engagement with one another?  What will it say about our sister-outsider bonds? The notion of policing is an entry point in understanding some of the severed bonds between black women. The need to heal our communities and build trust is paramount and we cannot do that if we are policing one another. 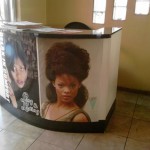 The spaces created by our hair ‘rituals’ reveal a lot about our shared and conflicting ideologies about gender, race and class. I conducted a few interviews while the participants were getting their hair done. One such interview was at a hair salon and another in one of their homes.  The spaces created were sacred (though often not always pleasant) — special spaces for discussing the ‘stuff’ of our lives. Yet, simultaneously created was a battleground for normalized policing. It is not uncommon for your hairdresser to make comments about your hair and how it reflects how you live your life, of course this is always context specific. But what is still significant to note is that these spaces continue to make up critical parts of our lives.  Moreover, they tell us particular things about how we organize as women, how we share, and how we produce common and conflicting knowledge’s about our lives.

Revisiting the hair journey I began years ago (re)awakens a feeling of urgency within me.  With perhaps slightly wider vision, which has not always brought wisdom, sometimes, compromise, I feel a deep sense of longing to engage in projects that aim to re-imagine our worlds as black women. I hope we create more places to think, reflect and share with one another. Our daily experiences are important, valuable and rich resources for our own development and existence. However, I want space to exist, to be fully embodied in the multiple, conflicting, urgent, beautiful, scared and sacred experiences of this life. 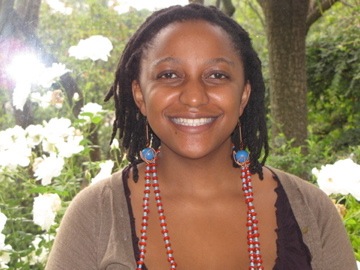 Mazuba Haanyama is a young writer, thinker and activist. She hails from Southern Africa, more specifically Zambia. She grew up in various countries around the world. Her childhood travels have significantly shaped her social and political views. Mazuba is passionate about the continent, young people and writing & performance. These passions shape much of her life’s trajectory. Mazuba holds a Masters Degree in Gender Studies from the African Gender Institute, UCT. Mazuba manages a poetry performance group, called Rite 2 Speak. She also co-founded a multi-media production company called Black Salt Productions. She currently lives in leafy Johannesburg and works at OSISA (Open Society Initiative for Southern Africa).