Op-Ed: Where Femen Has Gone Wrong – The Feminist Wire

Op-Ed: Where Femen Has Gone Wrong 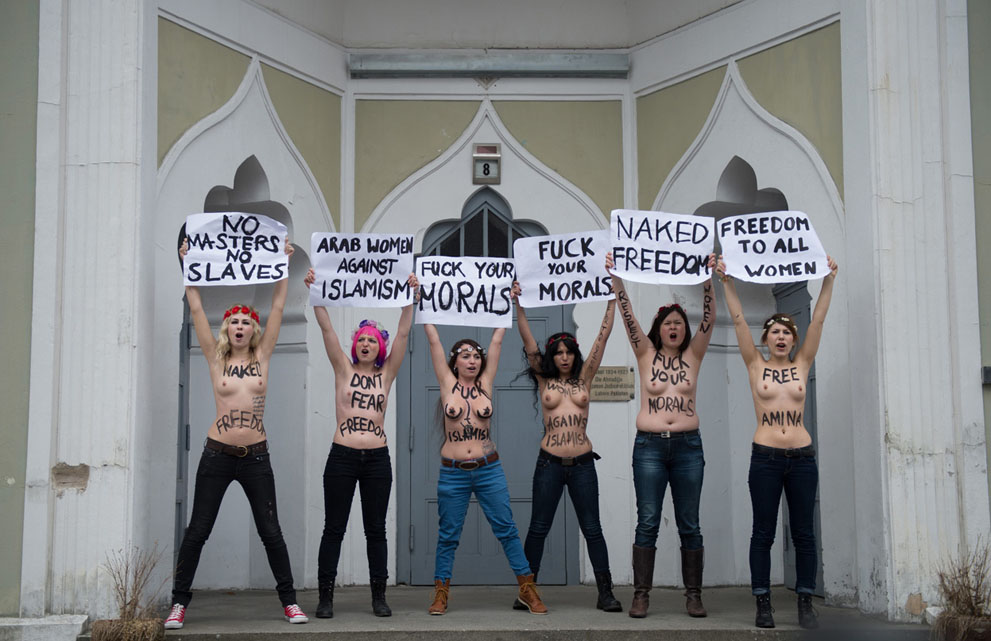 Femen is a feminist protest group founded in 2008, based in Ukraine. They received international recognition due to their direct and somewhat extreme methods of action. They engage in topless demonstrations, and protests outside of religious institutions and international marriage agencies, while pushing their ideology of the women’s sexual liberation, ‘sextremism’,  to the forefront. Their goal is women’s liberation.

So what’s sextremism? According to Femen, it means “to mobilize every cell of your body on a relentless struggle against centuries of slavery of women!” This I can certainly agree with. The attack on patriarchy warrants an un-relentless physical and mental effort. Yet, what is it about Femen that rattles the cages of so many people across the world? It is the fact that they so erroneously equate “freedom” with “nudity.” 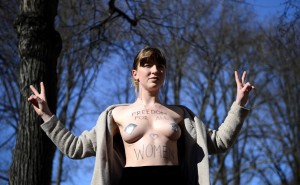 This is not to say that you cannot achieve freedom with nudity because after all, feminism is about what is right for each woman. In her pursuit of liberation from patriarchy and its destructive force; she can use whatever methods she requires. As long as she is conscious and aware of the condition of society and the institutionalized bias against women; it is her choice what she does post-consciousness. This is because feminism is not dogmatic.  While there are basic principles within feminism — for example, no one should be treated differently, judged differently, afforded different rights, or forced to do something in society according to their sex — there’s no blueprint on “how to be a feminist.”

For Femen, this has been their greatest shortcoming; approaching feminism in a dogmatic manner and placing a monopoly on what is and isn’t freedom. This has rendered them an isolationist and largely intimidating group, especially for those new to their cause.  Femen chain link themselves into a box that reads: “our way or the high way.”  And if you happen to be a feminist and disagree with them, then you must not be a “real feminist.” And if you are not a feminist and dislike their way of thinking, then you must be oppressed by “Islamism” and in immediate need of a dose of freedom (ointment administered by Femen, of course). 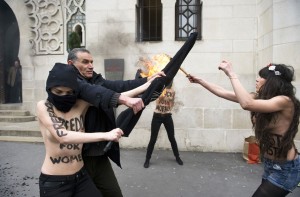 If you subscribe to, or even just believe in the principle that I mentioned earlier, there is no group or individual that can effectively exclude you from feminist ideology. As a group that claims to be inclusive, Femen have fallen short in including all women in their movement. If anything, they have further stiffened the already-existing divide between non-religious and religious feminists.

As part of their protest on the arrest of Tunisian feminist Amina Tyler, who posted topless images of herself on the internet, with arabic writing across her chest reading: “My body belongs to me and is not the source of anyone’s honour,” Femen called an ‘International Topless Jihad Day’. This began on April 4, 2013 and was followed by staged demonstrations around the world, mostly taking place outside of mosques in Berlin, Franch and Ukraine. These protests included the burning of Salafist flags and scuffles with the police. 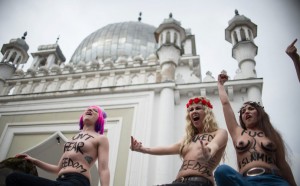 I agree with their concept of sexual positivity.  In fact, I respect and support their act of claiming their bodies within a largely sexually repressive society.  However, But, I do not agree with their methods.  Muslim women can proclaim freedom for themselves.  Forcing one ideology over another isn’t freedom.  Not only is it wrong to claim that all women under the sweeping brush of “Islamism” (an Orientalist term that I frankly detest) are inherently oppressed, but it is even more thoughtless to claim that they are in need of some sort of saving. Moreover, imposing a specific standard of freedom on un-consenting women is just another form of trivialization and oppression.

Are women outside of Femen not also independent free-thinkers with free will? Or are they defined solely by their choice of faith?  This line of thinking adheres to the neo-colonial idea of the Arab World as some kind of barbaric and uncivilised terrain innately unable to treat the women therein well.  This is dogmatic at best.  And feminism, as I understand it, isn’t dogmatic. Whether or not Islam truly promotes the mis-treatment of women in the Arab World doesn’t really seem to be a concern of Femen.  The latter is a deeply sensitive and complex subject that requires a ton of study and revision…not a clamorous gathering of topless individuals shouting “Topless Jihad,” as though it were some kind of panacea. 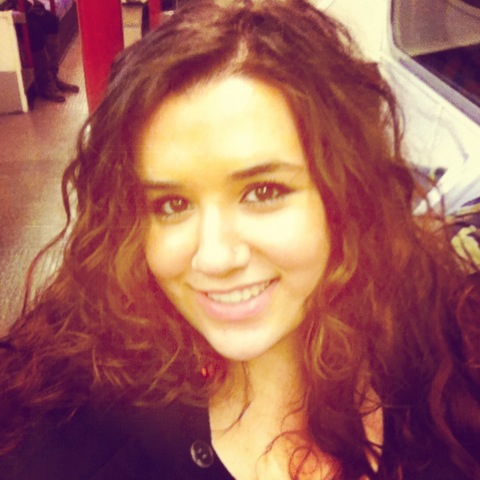 Mohadesa Najumi, History and Politics Undergraduate, and passionate feminist, originally from Kabul, Afghanistan, living in London. You can follow her on @mohadesareverie.