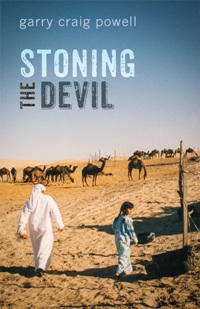 Stoning the Devil, a recent collection of  interconnected stories set in the United Arab Emirates by writer Garry Craig Powell, dismantles the stereotype of the passive Middle Eastern woman. In this authentic and vivid work of historical fiction, which was just nominated for the for the Frank O’Conor Award, don’t expect to read about the Muslim woman hidden under a burka with no sexual appetite of her own. In fact, the three main female characters are carnal and sexually rebellious, defiant and even passionately violent — making perhaps, not always the most carefully considered decisions — as they are treading new territory — but decisions of their own nonetheless.

The author, who lived in the Gulf countries for an extensive period, and taught at the women’s campus of UAE University for five years (where he witnessed collegiate women with boyfriends, girlfriends, and as ready to party as their western counterparts) tells me, “In these closely linked stories women are certainly seen as oppressed and victimized by the patriarchal society, but the book doesn’t just blame Arab men: the European males are not much better, and as I’ve said, the women at least struggle to realize their hopes and dreams, even if they don’t always do it in a way that Western feminists would approve of.”

And though sex and violence are some of the more scintillating aspects of this disturbing, yet lyrical and historically important novel, the author touches on a broader political canvas — namely the abuse of power. Sex is one way that manifests in these stories, as Powell sees the complex relationship between men and women in the Gulf countries as “paradigmatic of the contemporary world,” which the UAE, straddling two world views, is a part of. In his stories, Powell tells me, readers will find that “these characters are looking for love, but have to settle for lust; they’re looking for friendship, but have to settle for networking; they’re looking for meaning and purpose, but settle for luxury and glamour.” In that statement, Powell could just as easily be talking about my life in New York as a single gal’s life as in Al Ain. But the UAE — a melange of public executions, night clubs, camel markets, and skyscrapers — is in many ways an oasis of contradictions, which makes it the ideal setting for a novel that examines the perfunctory chaos that ensues when power goes awry.

But is America any less of a contradiction when it comes to portraying women in the media? Hardly. Female artists are at once slut-shamed for their sexuality (Lena Dunham, Beyonce), but also highly marketable because of it. American culture seems to vilify women who take control of their own sexuality for profit or fame, or even fun — yet is reliant on the old adage that sex (implied, a woman’s sex) sells, when multi-billion dollar industries in fashion, beauty, and the Hollywood machine can collect a paycheck. Certainly, this issue is not an easy one to negotiate; it is far from black and white. However, let’s face it:  it’s not just the Middle East, but us in the West, too, that can’t exactly make up our minds what “binders” to put women in.

More notable in this novel, is how Powell  moves away from the Western tradition of portraying the submissive Muslim woman as symbolic of a “backwards” Middle Eastern culture, one that should be viewed with hostility, primarily to support a colonial perspective. Writer Amal Amireh picks up this topic, writing, “The fixation on the veil, the harem, excision, and polygamy made Arab women symbols of a region and a religion that were at once exotic, violent, and inferior.” So the comic, erotic, and even violent sex scenes in Powell’s novel are crucial to this portrait of Middle Eastern women. For example, Powell describes a passionate, yet awkward one-night-stand in “Kamila’s Price” that delves into what this female character really wants for herself.  The scene is filled with muffled connections and gestures towards compassion and romance that don’t quite hit their mark. Those of us who have experienced the one-night-stand, know that this scene is right on target. In “Titanic 2,” set inside a women’s university, readers get a glimpse of the sapphic longings the female students have towards one another, and also the forwardness with which they make their feelings of lust be known.

In many other stories, readers will see women exact gory revenge upon men who sexually abuse them or disrespect their honor. Hopefully, these intimate portraits of women stripped naked (both literally and figuratively) will open up a new dialogue about the once taboo aspects of Middle Eastern women — one where political agenda doesn’t shield us from human stories of love and lust. 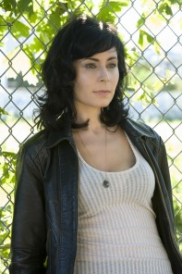 A New York native, Jill Di Donato is the author of the novel Beautiful Garbage and a contributor to the Huffington Post, where she writes a column about sex, relationships, and gender politics. In addition, Jill is the Editorial Director of Unruly Heir’s Good Days Media Channel where she often writes about New York characters, arts, and style. She holds an MFA in fiction from Columbia University, where she has also taught writing. Currently, she is an adjunct Associate Professor of Liberal Arts at the Fashion Institute of Technology and teaches in Barnard College’s summer program. She dedicates her work to the empowerment of women through the arts.