The Pulaski Skyway of Our Manhoods – The Feminist Wire

Home / Family / The Pulaski Skyway of Our Manhoods

The Pulaski Skyway of Our Manhoods 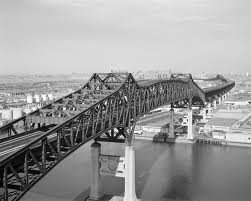 The jet black steel girders arched like aging flexed muscles fill my mind as I remember car rides with my Dad across the Pulaski Skyway glistening under motley gray Northern New Jersey skies. I recall my father at the wheel, after he retired from the Western Electric industrial works in Kearney, saying almost every time: “You kids look at that empty factory. That was my alma mater.” Although my sister and I were no longer kids, we would always look dutifully at his command and see the empty factory and the large space above it, now barren, that carried the art-deco Western Electric logo – the industrial totem under which millions of telephones were made and sent into the endless cycle of circulation through which capitalism regenerates its power to create and destroy communities and life-worlds in its morphing images and undulating demands.

The penetrating ebony of the Pulaski Skyway is still there and has even managed to find its ersatz fifteen minutes of fame and entry into the popular culture imaginary by being featured in the opening credits of every episode of that quintessential fictive quasi-ethnography of a certain dying – and always resuscitating – Jersey masculinity: The Sopranos. Western Electric still stands frozen like a monument to the manic rush of the industrial economy’s muscled and flaccid flesh that began its swan song with the advent of the Reagan Era. My dad’s cherished and hated alma mater is where he learned to speak working-class English inflected by the lilts and edges of Polish, Italian, and Irish intoned cadences.

And, of course, added to this old “white ethnic” cant was the sing-song and studied “hmms,” “that’s right,” “yes, sir” of his brothers and sisters from the Black Belt South who had come up North to find a better living.  Like them, he and hundreds of thousands of Puerto Ricans arrived just as the industrial economy was beginning to be ruined by the bosses and their well-paid and perfumed suits in DC. Black point, Puerto Rican counterpoint: that’s one of the defining sounds of the earlier migrations of which I, my sister, brother, and all our kin are products of in the Promised Land of the permanently delayed distribution we call America.

As we were growing up, my Old Man told us kids that on various occasions throughout the work year Western Electric workers shared food at the lunch break. That’s where Dad would for the first time eat kielbasa, perogies, corned beef, pastrami, sweet potato pie, and Carolina-style collard greens with ham hocks. Once in a blue, Dad would bring us kids some leftovers and we’d be initiated, through our tongues and guts, to the way poor folks managed to savor the salts and sweets of the earth at the end of a day of sweating in the fields or the assembly line. A facile and trite assessment would see in all this my Dad becoming an American: I’m not too sure he really ever did that – whatever that might be. Rather, he learned to live on a shop floor that had working stiffs from different, but not entirely incommensurable, histories of working, living, and dying hard.

The food was just a way to get all that in your gut, talk, flirt, talk louder about sex, curse at each other, joke around, brag about or bemoan your kids or old folks (if they were still amongst the living), discuss union politics and, of course, spin the endless yarns from home, the old neighborhood, way down South, or my country (Puerto Rico). Then, it was back to the line: drilling the bit into the center of the steel plate for eight hours a day or more if you were lucky and had overtime or the accursed double shift. Dad became a man of a certain kind on that line, eating those foods, drinking that booze, working with that hangover, taking long breaks in the shit house, living and dreaming in those strange foreign cadences of working-class English, and the harsh sounds of the bit meeting that plate again and again and yet again.

Slowly, my Old Man’s body became something other than the body that alighted at Idlewild Airport (now JFK) in the 1950s. It was that body which was the Dad that I knew and measured my own manhood against for good and not-so-good ends. Dad, like the Western Electric that molded his manhood and extracted his labor power, is gone irrevocably. He died in an instant in his bed as he slept in the house that he cherished and watched over since his retirement. He died quietly amongst his tribe and away from the suits or the other swells that get long obituaries in the papers, but never knew the cadences, tastes, and sounds that formed my Dad into a certain kind of man of a now evaporated history.

There is no car ride I can take with my sister to see Dad’s remains: I can only see the carcass of the Western Electric as we drive over the Pulaski Skyway and invoke the smells, touch, sound, and motion of his vanished body in my memory and somehow in the fleshiness that is the certain type of man that I have become though another regime of work, love, and embodiment. You see, in the end, men like me always reckon our fathers’ bodies for our psychic landscapes. And it is to the debris of that missing body and landscape that we wish to return to – that I wish to return to.

There is no returning: just different and pressingly new ways to be a certain type of man for the time you are allotted to walk the earth and make a mess and a work of art of your life. And the memory of my Dad’s body provides a floating anchor to latch on to something of the man I am and want to be. I wish the anchor was not floating or encrusted in memory, but that’s what I got – “a little something for myself” as we drive across the Pulaski Skyway and imagine the Western Electric open, alive, and chugging along. Papi might like that. 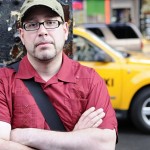 Edgar Rivera Colón, PhD is a Lecturer at Columbia University’s Narrative Medicine Program. Previously, he was Assistant Professor of Clinical Sociomedical Sciences at Columbia University’s Mailman School of Public Health in New York City. Dr. Rivera Colón is a sexuality/gender and medical anthropologist who has spent over a decade engaged in training frontline African American and Latino/a LGBT HIV/AIDS preventionists in the use of ethnographic research methods in developing community-level interventions. He is a co-founder of the Arbert Santana Ballroom Archive and Oral History Project.

Related ItemsEdgar Rivera ColonmanhoodMasculinityPulaski SkywayWestern Electric
← Previous Story Take the Shackles Off My Feet So I Can Dance*: A Call to End Gender Policing
Next Story → Man in Sound, Man in Place