Members Only – The Feminist Wire 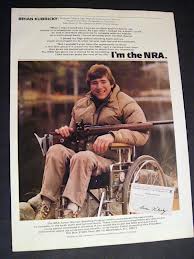 In spring 1983, the National Rifle Association published an advertisement featuring 16-year-old Brian Kubricky proudly displaying both his rifle and his disability in the pages of Reader’s Digest. Wearing the puffy beige down jacket and puffy bangs so redolent of early 1980s approximations of a tempered rugged masculinity, the photogenic Kubricky poses by the edge of a placid lake while cradling an enormous rifle in his arms and across his knees while sitting in a manual-operation wheelchair. Describing himself as a competitive shooter who “got a variance…that gives me special permission to shoot from my wheelchair,” Kubricky directly addresses the camera, foregrounded against the soothing soft-focus backdrop of the natural world, which reinforces his wistful recollection of when he “looked for a sport I could do well in and that allowed me to compete with my friends on a more equal basis. I found shooting gave me that chance.”

The “I’m the NRA” campaign, launched in January 1982 by the advertising agency of Ackerman & McQueen, ran through December 1985, with the anticipation that during its four-year run the message would reach as many as two hundred million readers. Interviewed in 1984 by a female undergraduate at Ball State University, the media director for the NRA, John Adkins, characterized the campaign as “part of a new ‘corporate identification’ campaign…purely [about] ‘image’ building and are not really aimed at persuading anyone to join the Association or convince them to embrace our political philosophy.” Despite its seeming attempt to disavow its relationship to conservative values, one is also tempted to take Adkins at his word. While images of Kubricky and other adolescent males proudly holding rifles and extolling the virtues of NRA membership appeared in a diverse assortment of US mainstream publications like Reader’s Digest, its target audience was arguably those readers of male-identified magazines such as Esquire, Field and Stream, Sports Illustrated, and Boy’s Life—anchors of and heirs to iconic instantiations of late-20th century heternormative masculinity.[1]

The use of compensatory technologies in the service of recuperating disabled masculinity – and, in particular, preserving the status of heternormative masculinity – is one of the more familiar tropes of industrial modernity. It is also a fundamental part of the arsenal of visual imagery associated with disabled men, both contemporary and historical. Images of disabled veterans and industrial workers shown in “before” poses with radical amputations and “after” poses with new prosthetic devices, for example, have been significant components of rehabilitating public attitudes toward disabled masculinity since the invention of photography in the mid-nineteenth century. Furthermore, images of physically disabled men in wheelchairs or on crutches aiming crossbows and playing basketball as well as doing manual labor have appeared for decades on national postage stamps, long before the emergence of the sporting competitions like the Paralympics. These are artifacts of an enormous visual archive devoted to the recuperation and preservation of heteronormative masculine power that effectively articulates what Australian journalist Stella Young has called “inspiration porn.”[2]

But while the Kubricky image is arguably recuperative, it is also evidence of the uneasy collision between representations of normative masculinity and representations of normative disabled masculinity during the late 1970s and early 1980s, a period in which disability rights activism flourished in the public sphere. Galvanized by the civil rights movements of the 1960s and 1970s, many disability activists put their bodies on the line, often in harm’s way, to protest lack of access to public facilities, transportation, education, and employment. Through legal channels as well as through media watchdog organizations, disability rights activists struggled to secure the kinds of protections and accommodations that would allow people with disabilities to live autonomously and thrive, in Kubricky’s own words, “on a more equal basis.” Thus Kubricky’s adolescent male profile in the “I’m the NRA” campaign was not in and of itself unique; after all, it was part of an assemblage of NRA member profiles that included celebrities, young women, and even an 8-year-old boy. What was unique was that Kubricky was the only person in the NRA’s campaign to feature a visibly disabled male adolescent, thereby awkwardly commingling the legal mandate to facilitate disabled empowerment and the rhetorical mandate to represent disabled people with dignity with the cultural mandate to ensure the preservation of disabled masculinity against all possible odds. 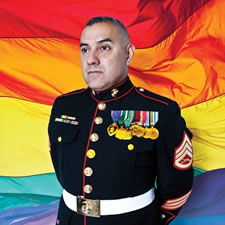 We have come to expect and even insist that men with disabilities look like and behave like “real men,” often against impossible odds, suggesting that confronting gender normativity is perhaps the ultimate stage of development for disability activism’s engagement with the tyranny of the normative. In the post-“Don’t Ask, Don’t Tell” era, even images of openly gay and openly disabled veterans – such as Eric Alva, the Marine famous for being the first seriously injured veteran at the beginning of the war in Iraq in 2003 – assiduously avoid any associations in which the recognizable contours of an identifiably normative masculinity might be suspect. The recuperative fantasies of contemporary gender politics exert enormous pressure upon disabled men to perform masculine normativity in order to disavow the appearance of weakness, vulnerability, or dependence. The capacity of disabled men to perform masculine normativity so as to be virtually indistinguishable from their ablebodied counterparts is directly proportional to their capacity to flaunt the features of that normativity, or so such recuperative fantasies seem to compel us to believe. In doing so, disabled men become more like ablebodied men who do not have to account for, nor even make efforts to change, cultural presumptions to heternormative masculinity lest they lose the stature that has been accorded to them as their biological birthright: the presumptive authority of male power.

The announcement in February 2013, on Valentine’s Day, that South African Paralympic sprinter Oscar Pistorius had been arrested for allegedly shooting and killing his girlfriend, fashion model Reeva Steenkamp, came precisely three decades after teenager Brian Kubricky first appealed to the empowering quality of shotguns and NRA membership for disabled users on the coffee tables of doctors’ waiting rooms and in the overstuffed racks of grocery aisles. Pistorius, known previously for his medal-winning and even record-breaking command of relay running events at the 2012 Summer Paralympics in London and at the 2012 African Championships in Athletics in Porto-Novo, Benin, now wears the mantle of a disabled man accused of murderer. The historical record on physically disabled men – as opposed to those identified with cognitive or so-called “psychiatric” disabilities – that have used a gun to commit murder is remarkably thin. In 1928, for example, Joe Kameniski of Jessup, Pennsylvania, shot the doctor who performed his amputation; more recently, in 2010, Charles Sylvester Stamper, a wheelchair user, was executed in 2010 in Virginia for murder.[3] Even in popular culture, disabled killers rarely use conventional weapons, preferring to wield prosthetic appliances to their advantage such as George Kennedy’s overzealous assassin does in Stanley Donen’s spy thriller Charade (1963). For Pistorius, who argues that he fired four bullets through his bathroom door after believing an intruder had invaded his home, gun ownership seems less an aberration of his disabled status and more of an inevitable outcome of the fantasies of recuperative masculinity. Indeed, one could even argue that the gun serves as an analogue to his legs—two complementary prostheses, each of which makes the other legible.

Activists often cite the incorporation of disability rights into South Africa’s newly formed constitution as one of the great triumphs of the post-apartheid era. Implemented in 1997, it provided for disabled status to become nationally protected under the rules of citizenship and facilitated the election of three openly disabled people to the South African Parliament. Within this newly formed political culture, in which aspirations to equality were shaped by attempts to resolve the contradictions of laws organized around perceived bodily differences, Oscar Pistorius emerged both as national hero and disabled icon: a postmodern wunderkind whose prosthetic legs crystallized his normative masculinity by way of his athletic superstardom. But even under such conditions, the maintenance of normative masculinity for disabled men can never be a part-time endeavor. Pistorius’s brand of normative masculinity draws more from the entitled worlds of celebrity athlete-model-branded commodity than from the political mandates of disabled citizenship: from his history of domestic violence – he was arrested in 2009 after allegedly slamming a door on a woman in his home – to the two boxes of testosterone and needles found in his bedroom on the night of the murder. For Brian Kubricky, the rifle and the wheelchair were twin engines of an incipient disabled masculine identity that took flight at the beginning of the modern disability rights movement. Thirty years later, the gun and prosthetic legs of a Paralympic star not only make visible the demands of normative masculinity on disabled men but also make visible how such demands might have been forged in the first place. Normative masculinity is a full-time job and a lifetime commitment, a perpetual renewal of membership in a club from which one lives in constant fear of being disinvited.

[3] Thanks to Walt Schalick of the University of Wisconsin-Madison for bringing these legal cases to my attention. 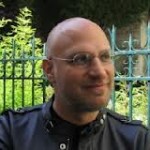 David Serlin is associate professor of communication and science studies at the University of California, San Diego, where he is currently chair of the Department of Communication. He is the author or editor of numerous books including Replaceable You: Engineering the Body in Postwar America (University of Chicago Press, 2004).