For the Women of Ciudad Juárez – The Feminist Wire

Home / Culture / For the Women of Ciudad Juárez

For the Women of Ciudad Juárez 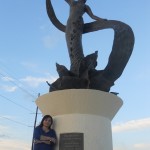 In late September of 2012, we gathered at the site where the remains of eight murdered women and girls were found in an open field known as el Campo Algodonero (The Cottonwood Field), located across from the maquiladora industry’s headquarters in Ciudad Juárez.  Since the discovery of their bodies eleven years ago this November, Campo Algodonero has been an “unofficial memorial,” a gathering site for public art installations, performances, and protests denouncing the ongoing terror of feminicide in the border region.  This year, the site became an “official memorial” funded by the government after an international court found Mexico guilty of negligence in the Ciudad Juárez feminicides. 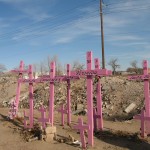 The last time I stood here, Campo Algodonero was a barren field, the only objects on its grounds were eight crosses painted in the iconic pink, each bearing a slain woman or girl’s name.  The crosses are still standing although now encircled by the walls of the newly configured memorial site, a small urban park bordered to one side by a heavily-trafficked boulevard, to the other by two newly-built apartment complexes which overlook the park’s interior space.  Our tour guide to the Campo Algodonero memorial site is Dr. Julia Monárrez, lead expert on feminicide and researcher at the COLEF (Colegio de la Frontera-Norte), where a two-day international seminar on “Bodies and Borders” had just taken place.  When the eight of us arrived in the late afternoon the memorial site was empty, despite the bustling sounds of street traffic, police sirens, dogs barking, children playing. 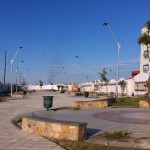 To the right of the entrance, a plaque dedicates the memorial “To the memory of the women and girl victims of gender violence in Ciudad Juárez.” At our next stop, the names of the women found at Campo Algodonero (Claudia Yvette González, Laura Berenice Ramos Monárrez, Esmeralda Herrera Monreal, María de los Angeles Acosta Ramírez, Mayra Juliana Reyes Solís, Verónica Martínez Hernández, Merlín Elizabeth Rodríguez Sáenz, María Rocina Galicia) are engraved on a wall, in a marble-encased panel. 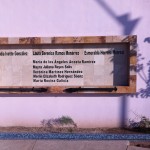 The adjacent memory wall is partially filled with names of additional women who were murdered in the city. Next we faced the shrine bearing a large cross, painted in the iconic pink, a tribute to and recognition of the mothers’ cross campaign for justice.  Finally, at the far side of the memorial site, we reached the large bronze scupture, “Flor de Arena,” designed by Chilean artist Veronica Leiton.

Like other national memorial sites, Campo Algodonero recognizes the victims of feminicide and their survivors.  The engraving of names on the memory wall is a way of making visible the women and girls whom the government attempted erase and disappear from public memory. “Naming,” as a common form of remembering and memorializing, also transforms the memorial site into a place for mourning the women’s deaths, honoring their lives and reflecting on atrocities that profoundly affected the community.

In countries undergoing transitions from authoritarian rule to democracy, it is common for repentant governments to erect a national monument to human rights atrocities as a form of reckoning with a violent past and truth-telling about their transgression of human rights norms.  Often times, governments resist demands for a public memorial to traumatic event in the history of the nation, refusing to take full responsibility for human rights abuses, preferring instead to “forget,” “move on” and “put the nation’s past behind,” as in Argentina’s initial “punto final” (final point) doctrine of the 1980s.  Governments that erect official monuments to atrocities often do so reluctantly, acquiescing to collective demands for public accountability, justice, and truth, to “Nunca más” (Never Again) campaigns.  In Mexico’s case, to a court-ordered mandate against a negligent state. 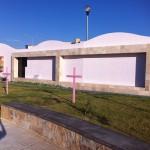 In April 2009, the Inter-American Human Rights Court issued a landmark ruling in the case of González and Others (“Campo Algodonero) v. Mexico, declaring Mexico responsible for the murders of Claudia Yvette González, Esmeralda Herrera Monreal, and Laura Berenice, three of the eight women found in el Campo Algodonero.  At its 39th session in Santiago, Chile, the international tribunal set a precedent throughout the Américas, affirming the government’s obligations to respond to violence against women by private actors; examining the Campo Algodonero case in the context of mass violence against women and structural discrimination; and finding that gender based violence constitutes a form of gender discrimination.

For Karla Micheel Salas, lawyer for the families of the slain women, the Court’s decision was equally notable for its unprecedented “recognition of the term, ‘feminicide.’” Similar to the term, “genocide,” first coined by Polish international lawyer, Raphael Lemkin, to describe what the Turks did to the Armenians in Turkey, feminicide provides an analytic and legal framework for locating state accountability around “crimes against women’s life and liberty.”

In its historic decision, the IAHRC declared Mexico in violation of its human rights obligations as specified in the 1994 Belém do Pará Convention and the 1978 American Convention of Human Rights, for failing to effectively investigate, prosecute, and prevent crimes against women, thereby denying the families of the women and girls due access to justice.  In a 167-page ruling the international tribunal ordered Mexico to comply with sixteen remedial measures, including reparations to family member, legal costs, renewed investigations into the murders, investigations of law enforcement officials responsible for the obstruction of justice, and building a national monument to the three murdered women.  Three years after the tribunal’s ruling, the government inaugurated the national monument at Campo Algodonero. 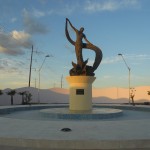 Named for the region’s topography, Veronica Leiton’s Flor de Arena is the centerpiece of the national monument.  “The inspiration for Flor de Arena comes from fossils native to desert zones,” Leiton explains, “fossils made of sand and shaped in the form of roses.”  Several years ago, Leiton came to the region from Chile via Cuba, to conduct theater workshops in Ciudad Juárez.  A member of the city’s arts collective, Antigona, Leiton competed with ten other artists in the design of a sculpture for the national monument.  “The concept came to me in forty minutes,” she told me recently.  “Conceptually, I aimed for something delicate and very dignified, not grotesque.  I envisioned an homage to 1,500 women and girls, which would convey the idea of transformation and transmutation.”

There is alchemy to the sculpture.  Its pedestal, shaped like a desert rose, transforms into a female figure, fifteen roses strewn across her full-length gown, each rose symbolizing 100 women; a petal from the desert rose turns into a swirling mantle which bears the reoccurring given-name of fifteen hundred women and girls; the woman’s heart becomes a fountain whose water trickles down towards the fifteen roses.  For Leiton, every detail bears deep symbolism. 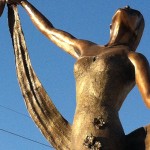 Each of the sculpture’s roses is “distinctly unique, like the girls and women, each one is different,” Leiton tells me.  “The statue represents a strong and young woman, a female image who projects calm and reflection, wearing the gaze of liberation.”  The heart contains memory, according to Leiton, “the memory of the women’s pain and suffering, which the water flowing onto the fifteen roses is meant to soothe and cleanse.”  For Leiton, the water fountain symbolizes “the transmutation of women’s weeping into a commemorative elegy for the victims of our city.”

The memorial generated some controversy.  At the memorial’s dedication in August, twenty members of “Mothers and Families of Disappeared Women,” who were not on the “official” invitation list, showed up anyway, demanding justice.  If government officials anticipated closing a chapter on the past with this event, they seemed stunned by mothers challenging the official version of the past. “No queremos un monumento, las queremos a ellas. “Vivas las llevaron, vivas las queremos,” the mothers chanted.  (“We don’t want a monument, we want our daughters. They were taken alive, we want them back alive”).

As Mexico’s Secretary of the Interior, Dr. Alejandro Poiré and Chihuahua Governor César Duarte officiated the dedication of Leiton’s bronze sculpture, the mothers chided the authorities for wasteful spending on the memorial and expressed their heightened disillusion and outrage with the second generation of feminicides, ongoing impunity, and lack of justice.  As the government officials stood up to leave, one of the mothers interjected, “the apology is missing.”  Secretary of State Poiré apologized, telling the mothers ‘I have a daughter and cannot imagine your suffering.’  One mother responded, ‘Of course not, you cannot imagine what we are suffering because your daughter will never experience what ours have.”

I asked Leiton if she lamented the abrupt ending to the ceremony, after all, it was the official unveiling of Flor de Arena.  “Not at all,” she replied.  “I’ve always felt close to the mothers.  They apologized afterwards and I said to them, ‘It’s fine, I would have done even worse things.’  I told the group of thirty mothers who remained after the ceremony that the sculpture was dedicated to the families with all my love and I explained the meanings behind every detail.  They were very attentive and emotional.  I shared the experience of Chile, where the government also erected an official memorial, which the Chilean people later re-appropriated as their own space.”

This is what Leiton envisions will happen in Ciudad Juárez.  For the culture of fear continues to be palpable in a city traumatized by two decades of feminicides, impunity, and lack of justice.  Leiton hopes the people will recapture public spaces like the Campo Algodonero memorial, transform them into sites of alternative truth-telling and memory,  empowering and unifying the community in the struggle for justice and social change.