The Precarity of Latino/a Child-Citizen Subjects: From Dora the Explorer to Child Deportees – The Feminist Wire

Home / Culture / The Precarity of Latino/a Child-Citizen Subjects: From Dora the Explorer to Child Deportees

The Precarity of Latino/a Child-Citizen Subjects: From Dora the Explorer to Child Deportees

By Nicole Guidotti-Hernández on October 8, 2012

What is a child-citizen subject? Put simply, it encompasses children’s right to exist, grow, and live in a country while being seen as a secondary participant in political and social life. In other words, the figure of the child-citizen subject initiates a conversation about national belonging. According to theorist Courtney Welkie-Mills, “children are fascinating as political subjects because they represent the values, expectations, and futurity of citizenship, while simultaneously being denied the explicit rights and privileges afforded to adult citizen.”(i)

Thus, the figure of the child as citizen and subject, that is a person of their own making, is a precarious position, because the child is not seen as his or her own advocate under the law, nor is she or he seen as a fully formed social actor. Further, this precarity marks a condition of existence without predictability, security or guaranteed psychological welfare and a kind of predictable dependence on a guardian, whether that guardian be a biological parent, an extended family member, or even the state. Thus, we might think about the figure of the child-citizen subject as complicated, because while the figure of the child bounds with possibility, it also represents a position of vulnerability. As political scientist Andrew Rhenfield has argued, the UN Convention on the Rights of the Child demonstrated a need for “participatory institutions [to be] designed to further the interests of children, cultivate their political maturity, and mitigate the harm that giving power to the politically immature might cause.”(ii)

So while the UN policy is designed to protect the rights of all children, and hopefully foster their entry into planetary society as politically responsible and mature, one must ask, what happens when that child-citizen subject is a brown Latino/a child in the United States? And what happens when that Latino/a child-citizen subject becomes the focal point for all sorts of discourses of violence around citizenship, be they the figure of the Anchor Baby, Dora the Explorer as a potential illegal immigrant, or a new unprotected group, unaccompanied migrant children facing deportation proceedings?

My own scholarly work examines the history of structural quotidian violence as a way of maintaining social inequalities. From Indigenous genocides to women’s implication in the reproduction of patriarchy, it is important to examine not only historical events that codify violence as their strategy of citizen making. Also, we need to think about how violence is deployed in discourse and laws as systematic means of exclusion. Nowhere are we seeing more of this quotidian means of exclusion than in debates about the role of Latino/a children. Their precarity carries into ideas about Dora the Explorer’s privileged social mobility, which created quite a stir after the State of Arizona adopted SB1070. Passed on April 24th 2010, SB1070 “Requires officials and agencies to reasonably attempt to determine the immigration status of a person involved in a lawful contact where reasonable suspicion exists regarding the immigration status of the person, except if the determination may hinder or obstruct an investigation.” 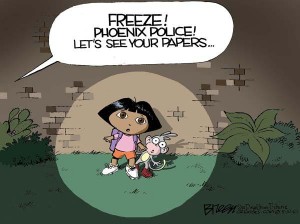 Right at the moment this policy emerged, Latino/a social mobility as a crime was galvanized via the Arizona law. So even though Dora, as a figure, manifests a particular amount of privilege (social, class, and economic) that is most closely associated with whiteness rather than black or indigenous identities, conscious projections of her as a Latina/o after SB1070 constructs Dora as a universal Latina subject and potential illegal.

Immigration activists flipped the script with these images, seeing Dora as a means of expressing the absurdity and irony of suggesting that all Latina/os are like Dora and thus are all the same. They took America’s and the Nickelodeon Network’s goldmine of childhood innocence and turned Dora into a potential threat representative of what the Right would like us to believe are the invading brown hordes. The people who created these images draw on the fact that Dora’s creators purposefully did not specify her ethnic background, “preferring that she have a pan-Latino appeal.” (iii)

By doing so, those photoshop wizards play upon the fact that there is a common assumption about what Latinos “look like” which is both specific (the majority have brown eyes) and vague (brown eyes are a genetically dominant trait). They also play on xenophobic fears about brown bodies and immigration, suggesting that even a brown, 7-year old cartoon character might be illegal. In the case of Dora’s deployment in the anti-SB1070 and pro-immigrant reform movement, Dora is “the” representation of the universal Latina/o subject that I discussed in my earlier article. Yet despite these problematic constructions, U.S. Latinas/os and Latin Americans identify with Dora on a different plane, not just as consumers but now in ethnic and political solidarity as she represents version of their identities, cultures, in a new re-appropriated political role model for immigration activists. 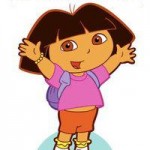 In this poignant political moment, we see how Dora the Explorer intercedes not only into children’s self-identities, but those of adults in the immigration reform movement. In other words, people who identify with Dora as criminalized Latino/a or rather questioning illegality explicitly engage with the concepts of nation-space and citizenship when they use her image. Major news outlets including CBS picked up the story dramatizing what many of us already knew: Doctored pictures of Dora the Explorer are being widely circulated online and through text messages. As the caption states, “Dora the Explorer’s alleged crime? “Illegal Border Crossing Resisting Arrest.” (iv)

At the same moment, other images surfaced, including one of a stop by Phoenix police, one with the caption “Do I look Illegal?,” and one of Dora jumping over the U.S. Mexico border. While all of these images rely on representational strategies of familiarity, humor, and violence, what we see most closely is how Dora has come to stand in for the battered immigrant body. More particularly, these images show the potential for extreme state and symbolic violence against Latino/a children who are sometimes viewed as enemy combatants in an immigration war. Dora’s black eye and police-battered body in one image, her shock and surprise at being apprehended by the Phoenix Police, and her glee in asking about illegality all stress a kind of precariousness. 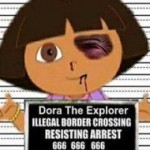 All three images show how Latino/a children potentially, and because of their racialization, whether documented or undocumented, embody the notion of insecurity and questions about citizenship. These images play on the fact that Dora’s mobility has a double meaning: she could be citizen or undocumented and they all mark that ambiguity. By raising the question “Do I look illegal?” the image toys with and critiques how and what the U.S. state and its social actors can identify, with accuracy, as an undocumented person for deportation. And while certainly the metaphor of Dora as stand in for all Latino/as as potentially being racially profiled, they also remind us that, as Rhenfield argues, “[s]ecuring children’s welfare and development must be a priority before considering whether or how they should participate as members of a political community.” (v)

These tensions about child welfare and being members of a political community as rights-bearing subjects are further articulated through examining the role of a newly emerging group of Latino/a undocumented child citizen non-subjects, the unaccompanied minor.

Kids like is six year old Juan David Gonzalez, who cross north in search of their parents are now facing deportation proceedings alone and without legal representation. Forced into becoming his or her own advocate under the law, Gonzalez has no parent or guardian to speak for him. He is one of 11,000 accompanied minors apprehended by ICE this year, and like them, cannot be his own advocate in the courts because he is not capable of understanding the system as a 6 year old. With immigration law containing few protections specifically for minors, Juan must to go before an immigration judge — confronting a prosecutor and trying to fight deportation — without the help of a lawyer, which seems simply impossible given the language barriers, his inability to see what he’s done, looking for his parents, as a crime. (vi)

So when we put Dora next to Juan, we get a clear sense of the precarious nature of Latino/a and other undocumented children who are denied those simple freedoms to grow and live in the predictability, security, and/or guaranteed psychological welfare of dependence on a guardian, which one could argue, is the United States. My hope is that this brief analysis of symbols of Latino/a child-citizen subjects can allow for a productive conversation on structural violence, recognizing that children are full of potential and worthy of care regardless of their immigration status or race.

ii “The Child as Democratic Citizen,” Andrew Rehfeld The ANNALS of the American Academy of Political and Social Science 2011 633:142

iii “Interview with the Creators of Dora the Explorer: Chris Gifford and Valerie Walsh.” 2003. Available online at www.nickjr.com/grownups/home/shows/dora/dora_interview.

v “The Child as Democratic Citizen,” 146