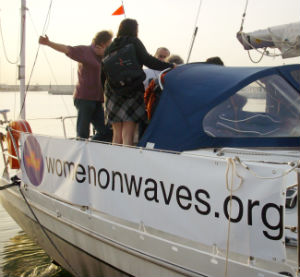 Moroccan police Thursday escorted from its waters a small yacht carrying women’s rights activists claiming to be able to perform abortions on board, after anti-abortion protesters jeered them on land.

The Dutch group Women on Waves sailed the boat around the northern Moroccan harbor with banners advertising an information hotline about abortion, which is illegal in most cases in this North African country.

A day earlier, the group had said that a ship that can provide “safe, legal, medical abortions” up until 6.5 weeks of pregnancy was on its way from the Netherlands. Medical professionals have traveled before to European nations to raise awareness; the group’s founder said that abortions had been performed aboard ship in international waters off of Poland.

The trip in the harbor of the Mediterranean coastal town of Smir was the abortion rights group’s first event in a Muslim country.

Abortion in Morocco is illegal, except in rare cases where the mother’s life is threatened and it is also illegal to give out information about it. Moroccan officials had said the boat would not be allowed in to the harbor and police sealed the port for what they called “military maneuvers,” denying journalists access.

But in the afternoon, activists from Women on Waves said they already had stationed a sailboat in the harbor several days ago, fearing the port would be shut down. That boat took off around the harbor, about an hour after the group’s founder approached crowds of protesters on the ground, trying to hand out fliers on abortion in Arabic and French to crowds of protesters.

Police later boarded the Dutch-flagged yacht and escorted it out of the marina. No one was charged.