I’m Exhausted but I Do Want to Be Well: Raising Womanish Girls, the Performance of Mothering and Wading in Murky Waters – The Feminist Wire

Home / Academia / I’m Exhausted but I Do Want to Be Well: Raising Womanish Girls, the Performance of Mothering and Wading in Murky Waters

I’m Exhausted but I Do Want to Be Well: Raising Womanish Girls, the Performance of Mothering and Wading in Murky Waters 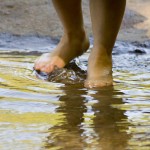 I am exhausted! It is exhaustion that overwhelms and overruns me because of its deep-seated roots. Roots that make one question her presence in the Academy while simultaneously questioning her ability to be a mother. How is it that I can maintain my authentic voice within a space where my experiences as a black woman are devalued? More importantly, how do I do this while simultaneously working to develop and provide space for the authentic voice of our two womanish girls? I am exhausted but I do want to be well!

The production of scholarship coupled with the production of guiding girls is more than a notion. I started graduate school exactly six weeks from the date I gave birth to our second daughter. Breasts engorged and leaking, the incision from the caesarean section surgery still tender, I sat around the table of mostly white men and women trying to wrap my mind around the hermeneutics of Hans Frei, Paul Ricoeur and Jacques Derrida and their relation to the lived religion of the black women I grew up with. I was imploding! Noticing the look of bewilderment in my eyes, the white male professor paused his lecture, directing his lead encased micro aggressive artillery toward me only to say, “Melva are you getting this, are you still above water?” The only response I could muster, “Yes, I’m wading.”  Today, I am still wading in the murky waters of the academy and I am still exhausted.  This exhaustion has the potential to leave me mentally spent, spiritually bankrupt, and on the brink of physical crisis.  It makes itself most visible in my performance of mothering.

As I consider my position within an academic culture that promotes isolation and thrives off of competition, I am haunted because the posture which I am embodying, is one that often renders me emotionally absent, complicit in my own oppression, and has direct implications on the well being of our daughters. How do I teach my daughters to resist the temptation to uphold a posture which devalues their everyday experiences, their bodies as fully present and their intellectual aptitude as credible while simultaneously preparing them to dismantle the master’s house with the master’s tools in the midst of exhaustion?

I want to be well!  Caught between the normative gaze and hegemonic structures leaves little room for being a black woman in the academy; it leaves little space for understanding black women’s presence in the academy, thus leaving me in a perpetual state of  embattlement. 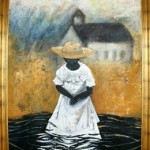 In the Gendered Pulpit, feminist rhetorician Roxanne Mountford conveys, “Spaces like bodies produce meaning and are also endowed with meaning.” Speaking about the Christian pulpit she explains,

Rhetorical spaces carry the residue of history within them, but also, perhaps, something else: a physical representation of relationships and ideas.

Thus she proffers “the relationship between women and masculine rhetorical pulpits are tenuous.”  The same is true for black women’s bodies and the “masculine rhetorical podium.”  Nellie McKay illumines this point further.  She writes, “To be black and female in the academy has its own particular frustration because it was never intended for us to be here.  We are in spaces that have been appropriated for us.”  In Black Feminist Thought Patricia Hill Collins concludes, “African American women intellectuals have a place but not an importance in academe.”  If this is the case, how do we become well inside this hostile environment, which in many instances views our bodies as a part of the intellectual and material wealth to be conquered?  How can we live and be well in the academy while negotiating what Idriss Davis identifies as “the relationship between oppositional histories and spaces and the dominant historical narrative?”  If Mary Helen Washington is correct in her assertion that “a mother serves as the female precursor who passes on the authority of authorship to her daughter,” then one way we become well is by being unapologetic and relentless in wading beyond survival but as a point of thriving on behalf of our blood and other daughters.  Black women’s ability to confront and critically engage what Hill Collins suggests is“the matrix of domination most visible in interlocking systems of oppression” does not begin with our presence or acceptance in the Academy.

I recall the intellectual prowess of my grandmother and mother and other women folk in my community.  Void of podium or pulpit it was at my grandmother’s kitchen table, where I was first introduced to the textual and non-textual rhetorical strategies and performances like wading that everyday black women used to resist oppressive social ordering.  It is in the academy where, black women have turned kitchen table lessons into stellar scholarship and it was the kitchen table where the passion for scholarship was transmitted.  My ability to interrogate constructed identities, negotiate cultural space, and recuperate appreciation for the “skin I’m in” does not commence with the academy but with my experience as a black woman in the presence of my community. Another way we become well is by re-membering and redefining our position as generators of knowledge.  I come face to face with this necessity everyday when I look in the eyes of my daughters Frii Nafisah-Joi and Phoenix Imani-Rose.

My work on the history and performance of  black women’s preaching bodies means everything to me.  However, I have had to question does it mean more to me than the well-being of my girls?  Does the isolating nature and competitive ethos of the academy arrest particular sensibilities that might impede healthy mothering?  What will our daughters glean from our posturing and performance in the academy?  This summer while taking an intensive language course and studying for my comprehensive exams I suddenly became ill and landed a hospital stay for five days.  My daughters cried when they had to leave me in the emergency room.  I cried too.  A woman, very much like the everyday black women I bring to the graduate seminar table, walked by me and put her hand on my shoulder and simply said, “It’s going to be okay. God’s going to work it out and your girls will be alright.”

I allowed the tears to flow as I pondered whether or not my daughters would assume my performance. Would they work themselves to the point of physical and mental exhaustion and suggest that they were doing it for their daughters too all the while afraid to admit that ego is partially to blame?  Would they forgo doctors’ appointments, much needed spa treatments, and skip church on Sundays to do the work? Would they allow their lover to fall asleep alone many nights without their touch or feel of pleasure? I am exhausted but I want to be well.  As black women in the academy our wellness must be predicated on something more than the work.  The work must cease to be a metaphorical example of intimate partner violence wherein it seeks to keep us all to itself, with little to no contact with the outside world.  Instead, our wellness is predicated on our connection with our daughters, sons, partners, and each other.  We are generators of knowledge and our knowledge is sustainable, worthy of academic study and valid.

Our wellness is predicated on our continued ability to wade in the murky waters of the academy.  The act of wading is significant because of its subversive lyrics in the form of a Negro Spiritual used to inform slaves that the underground railroad to freedom was about to come through.  One would make her way to the water to camouflage her scent from the trackers. Yet, wading has another symbolic meaning.  Wading in the Water has an underlying significance, in encouraging deep immersion in the spiritual waters of the soul.  On this level the lyrics communicate that if one follows the songs advice about engaging in a process of deep exploration of the waters of the spirit or the conscious, a transformation will occur. “God’s gonna trouble” these spiritual waters, and the affected person will never be the same.  And when one listens to or sings this song the lively rhythm and infectious melody provide needed confirmation; one is indeed a new person. So, metaphorically speaking, wading in the water is as much about survival as it is transformation and as such the murky waters become a bit clearer as I am reminded of what the work really is: raising womanish girls who will choose to be well! 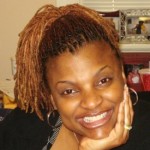 Melva L. Sampson is a scholar, writer and ordained minister. She is a doctoral student in the Graduate Division of Religion at Emory University with a focus in black women’s embodiment and African American religious practices. Formerly Melva served as the interim director for the Women in Theology and Ministry Program at Candler School of Theology, Emory University and as the project manager for the Sisters Chapel WISDOM Center at Spelman College. Melva’s published works include After Katrina and Rita: What Must I do to be Saved? which appears in The Sky is Crying: Race, Class and Natural Disaster and Hell No! which appears in the final volume of Those Preaching Women: A Multicultural Collection co-edited by the late Reverend Dr. Ella Pearson Mitchell. Melva earned a Master of Divinity from Candler School of Theology, Emory University and a certificate in Black Church Studies; a Master of Arts in Human Communication Studies from Howard University; and a Bachelor of Arts in History and Political Science from Virginia Union University. She and her partner Darrick are the proud parents of Frii (F-R-E-E) Nafisah-Joi , Phoenix Imani-Rose and Jayden Christian.