With Audre as My Guide: Teaching and Surviving in Post Katrina New Orleans – The Feminist Wire

Home / Academia / With Audre as My Guide: Teaching and Surviving in Post Katrina New Orleans

With Audre as My Guide: Teaching and Surviving in Post Katrina New Orleans 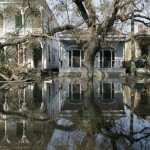 I started my career as a sociologist in New Orleans five years after Hurricane Katrina. The school I worked at still held classes in trailers. The trailers were old. The interiors would get wet when it rained. Doors would not close. Several were said to have a mold problem. The makeshift campus would often flood and we would wade through the water to see each other; just to learn. Often and without warning, the words of Audre Lorde would come to me. She would provide me with explanations of the inequality that surrounded me. As I taught my majority female classes, at a historically Black university – a campus whose issues were constantly in the news, viciously attacked on a local blog – I asked, “What other human being absorbs so much virulent hostility and still functions?” (Lorde 1984:151).

The school was indeed born out of hostilities – a last ditch effort to enforce segregation in Louisiana. As a local journalist said, the school was “born of evil” –with fewer resources than the state school a mile or so away. By fewer resources, I am referring to basics like paper, technology in classrooms, actual classrooms, and library materials. One of my earliest memories at the school was getting into a verbal altercation, in front of my students, with a male professor much larger than me. Our argument was about the use of one of the few tube televisions available. Though I had gone through the right channels and requested a television, the equipment promised never came. And though I was scared – no professional had ever yelled at me- I said “My name is Dr. Weissinger and I will steal your television again next Thursday.” That year, as a birthday present, my parents sent me a miniature projector so I could show documentaries without being assaulted. I carried a DVD player in my trunk for the remainder of my time at the school.

As educators, we absorb such hostility every day. From our frustrated colleagues as well as from others who were loosely connected to the school, we endure various forms of violence. The most resourceful learn to train our anger, rather than deny it (Lorde 1984: 145, 41). 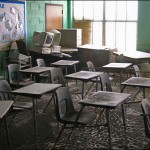 We focus on our students, engaging a type of other-mothering – nurturing our flock how to respond to the variety of issues that interfere and threaten their ability to remain students. We foster the development of our “young” through critical thinking exercises, believing that we should provide them with the tools to address the poverty, which flowed through the school and our community. We put ourselves up as buffers against the social problems that loomed large just outside of our words. This of course did not (and could not) shut out the reality.

As a class, we sat in temporary, dilapidated trailers. Navigating this arrangement was an effort of emotional labor. Simply by being in trailers still, years after the storm, years after other area colleges (public and private, majority white institutions and historically black colleges) had been rebuilt, provided evidence of the school’s unstable and marginal social position. It was impossible to ignore the clear inequalities and the weight of these things took their toll. My colleagues worked hard not to unfairly lash out or burnout. We tried to let Audre serve as our guides. We struggled to believe that “One of the most basic Black survival skills is the ability to change, to metabolize experience, good or ill, into something that is useful, lasting, effective” (Lorde 1984: 135, 127). 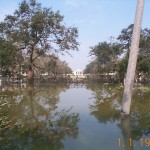 With some unknown resiliency, many of my peers remained excellent teachers. We took seriously the need to educate students in post Katrina New Orleans – students who came from limited and dangerous New Orleans public schools; students who, often, would not have meet entrance requirements at other colleges; students who, as heads of their households, had to make tough decisions when it came to balancing work, family and school obligations. I would sneak young children into my classes and treat them as if they too were a college student. Without this effort, my real students would not have been able to make it to class because they did not have daycare or a support system which would allow them to be both parents and students.

For every bit of extra effort we put forward, there was a cost. The payout was not always immediate or in kind. Many of my colleagues became ill – multiple kinds of cancers, yet they kept coming to work until their bodies would just not allow it any longer (Silverglate 1999). Others struggled with emotional issues like stress and burnout – the same kinds many face in the helping professions, but magnified from dealing with entrenched micro and macro discrimination (for examples, see Cherniss 1995, Crosmer 2009, June 2010). While I did not have cancer, I did develop tumors that I ignored until my body simply would not permit my self-abuse any longer. It is with the lived experience of constantly fighting, even when exhausted, that I understand the fates of Black women academics that become ill and, at times, die at very young ages. “Oppressed peoples are always being asked to stretch a little more, to bridge the gap between blindness and humanity” (Lorde 1984:132, 42).  Audre Lorde’s words breath new life when used to explain the heavy prices Black women academics pay, especially those working in underfunded institutions. Our labors are soul and cell altering, Our lights are dimmed far too soon as we waste our mental and physical health struggling to get past the veil of discrimination entrenched in several institutions, including higher education.

Many I labored with did not leave the job immediately or even consider looking for alternative work that would cause them less stress. They feared, and rightly so, that without their work at the school, the students would be left with those professors who were angry or were just trying to stay around until retirement. This was not naïve or an illusion of grandeur. Everywhere we turned, we saw dead bodies. Dead because they had to fight for so long to go back to work after Katrina and still harbored anger for the administration that left them without a paycheck for so long (AAUP 2007, Kurland 2006, Mangan 2006 – all serve as examples).  Dead because they had to rebuild their homes and communities from scratch – suffering through the administrative red tape in addition to their emotional loss. Those who had chosen to disengage from the multiple internal fires resulting from a lack of monetary resources and the decimation (and near non-existent rebuilding) of campus facilities acted as if they were dead. Put plainly, at this point in history, many of the graduates of the institution are needed to take on leadership roles within a city that is recovering and reorganizing because of the racialized and class based social issues that Katrina has brought to the forefront. How could we leave students, who needed to become leaders, with role models who are worn thin from addressing so much? The teacher scholars who operated at this school worked themselves to death multiple times: emotionally, intellectually, and physically.

In focusing on our students, trying to act as buffers against the internal and external distresses present, my peers could not see the signs that too were tired or even ill. By the time they recognized their state it was often too late. The cancer had taken root and spread. The tumor had grown large, quickly. The alcoholism or addiction that was once under control now seems a part of the daily repertoire. Our relationships with others outside of work deteriorate. In fact, all we can do, it seems, is talk about work. It becomes all-consuming even as our thoughts and actions needed to be shifted to examine health problems which threatened our future abilities to teach.

The thing about it – the thing that should stick in our minds is that for every known Black, female academic who has died too soon – there are others too – known only at the small colleges they have toiled. The unsung, overworked academics and their sisters from schools that are a percentage more stable have both given much more than should ever be asked.

To respect the legacies of all teacher-scholars, it is important to continue contributing to the scholarship that these individuals died still trying to speak to life. We can do them another honor, too. If we listen to our bodies and fight to stay balanced, we can make the quality of our lives a testament to their passion. Should the cancer or other untimely illness visit us, we can live up to their noble examples and speak about our various deaths in a real and honest way.

Certainly work life is layered in discriminations, both in and out of the academy, and we internalize and become sick navigating such (St. Jean and Feagin 1998). At the most disempowered and disempowering schools – where racial discrimination from state officials, in addition to internal, secondary marginalization is present (Cohen 1999) – dysfunction takes the form of a super cancer: quick moving to the body, as well as soul.

I am thankful to one of my intellectual mothers, Audre Lorde. Her words encourage me to teach and write. Her legacy encourages me to survive.

Cohen, Cathy J. 1999. The Boundaries of Blackness: AIDS and the Breakdown of Black Politics. Chicago: University of Chicago. 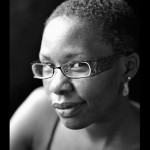 Sandra E. Weissinger received her PhD in Sociology from the University of Illinois at Urbana-Champaign in 2010. She currently is an Assistant Professor of Sociology at Southern Illinois University Edwardsville. Her work mainly concerns predominately Black Institutions – such as Black churches and Historically Black Colleges and Universities. Her published work addresses the intersections of race, gender and class as well as inequality.

Related ItemsAudre LordeHurricane KatrinaNew OrleansSandra E. WeissingerTrauma
← Previous Story I’m Exhausted but I Do Want to Be Well: Raising Womanish Girls, the Performance of Mothering and Wading in Murky Waters
Next Story → Occupying Myself: Resisting the Colonial Voices Within and Accepting My Heaviness