On Motherhood and Surviving Sexual Violence – The Feminist Wire

On Motherhood and Surviving Sexual Violence

There are moments in life that lift a curtain and give us a glimpse of what is really propelling us through this world. Reflecting on and processing the births of my three children is a series of those moments for me as a mother and as a survivor of sexual violence.

Every person who has experienced sexual violence finds a unique path toward reconciling the past with the future we want to create. For me, forming my identity as a mother has awakened my mind, first to the pain motivating me and my reactions, and now to the possibility that I can create equilibrium in the midst of contradiction. I can embrace pain and joy; I recognize fear and hopeful anticipation. I can push myself forward while acknowledging the ways that the past begs to hold me back.

I remember during my first pregnancy as a very young woman, in a birth class, stating that my biggest fear in anticipating labor was losing control. The midwife teaching the class said to me, “Well if something goes wrong, you will lose control.” She said it dismissively, I thought. Panic settled in. I felt silly for my petty fear. Maybe I should have feared bodily pain or back labor. I know now that fear of losing control is common among survivors of sexual trauma, those of us who have had our bodily autonomy shredded and mangled, those of us who were held down or emotionally degraded while the precious gift of sexuality was stolen. It’s no wonder I feared losing control and having my body acted upon without my consent.

As it turns out, I did lose control when I was giving birth. My worst fears were realized, just as they had been when I was raped. I felt a familiar resignation, the feeling that, “I will lose this battle.” I had to have a C-section, which I had not wanted. The doctor who performed it spoke to me with deep disrespect, as if I, an unmarried, young mother on Medicaid, was offensive for needing his services. In that moment, I couldn’t question him. I laid still while this man, who had moments earlier treated me like dirt, cut my abdomen open and pulled my beautiful baby from my insides and proclaimed him a boy.

I had lost control of my body–just like when I was raped. I couldn’t even talk about it. Everyone kept saying, “The baby is healthy; you should be glad.” Of course I was glad, I was ecstatic to be a new mother. But aren’t we allowed to experience conflicted emotions? Couldn’t it be true that I was ecstatic and sad and afraid all at the same time? Fear buffered my memory of the birth, accompanied by a validation that what I knew about the world was true: my status as a woman was always subject to control, disrespect, and violence. And I deserved no more than these truths.

I chose to focus on the positive side of the contradictions I was feeling. I bathed myself in the  wonder of my new baby, and this began to compensate for the negative affect that I had experienced. My miraculous son helped me to grow. I began to believe that I could with a whole heart grow in this new way, and never miss what had been hidden from me by fear. 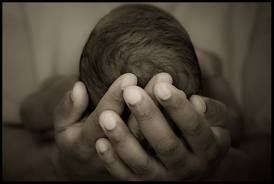 Mothering is like a constant mirror to the soul, and it gave me a context within which I could attempt personal growth. My original self-work was misguided. As I gestated my second child, I had a steely determination to do better. I had disappointed myself once in my first birth performance, but I was certain it would not happen again. I see now I still centered the problem in me and my womanhood. I stuffed my fears and distorted them into a rigid grab for some semblance of control. I pretended to have faith and trust the process, but what I really wanted was to control the process. Giving birth the second time allowed me to experience what I needed to feel: a euphoric loss of control. I was completely at the mercy of mother nature as I pushed my baby out of my body, but I was held in that space. I was held by my midwives, my partner, by millions of women who had given birth before me and gave birth with me.

As my children grew, they poked more and more holes in my desire to control my circumstances to prevent pain from emerging, so that while gestating my daughter, I allowed the emotional pain that pregnancy triggered in me. I began to accept that my vulnerability was opening the door to genuine resolution. I gave birth to my daughter in a powerful space. It wasn’t power that came at anyone’s expense. It was a bright beacon of internal power that healed a hole in my heart. It was a power that gave me back gifts I didn’t know I was missing: the gifts of vulnerability, complex emotion, forgiveness, and imperfection. In that moment I was proud of my imperfect self and the imperfect reality I had fashioned for myself and for my children.

Becoming a mother has been a profound part of my journey to heal from sexual violence, bringing me the opportunity to reclaim a powerful connection to my body and my womanhood. Through these experiences I have become better at embracing my vulnerability and celebrating my strength. I know that I am affected by my environment, by what happens in the world, by the privileges and inequities that exist in our society, and by the shifting energies that ripple through my little family, my extended family, and my community. I am affected by my past and it lives inside me. I try to be affected by my future too, especially the futures of my children. This is a complex and difficult space to live in, but it is real. It gives room for acknowledging pain, and it gives room for healing. It gives room for our many imperfections, but it also gives space for infinite potential.

I still wish I had never experienced the violence that is a part of my past, but I am grateful to have opened the door to the reality inside me. The trauma I experienced has altered me, but it has not destroyed me. My children are magnificent beings that my body, which I once saw as so damaged, grew and nourished. I give thanks for the privilege of being their mother and of walking with them through our imperfect and perfect journeys.

Gretchen Davidson lives in New Hampshire with her large, extended family. She is currently in graduate school studying to become a social worker.