Massa Mitt Does South of the Border – The Feminist Wire

Home / Economy / Massa Mitt Does South of the Border

Massa Mitt Does South of the Border 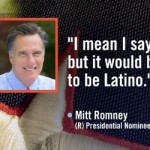 Over the past few months, the GOP has proudly reveled in Ronald Reagan’s old chestnut that “facts are stupid things.” First, Anne Romney told us at the Republican National convention that her bootstraps moxie enabled her to work hard enough to marry a multi-millionaire.  Then, Mother Jones magazine broke the story that Massa Mitt Romney rhapsodized at a private fundraiser in May about being Latino.  Romney joked about an alternative south of the border heritage shortly after he delivered his now infamous condemnation of 47% of the American people who suck up government handouts. He joked that “had he been born of Mexican parents (he) would have had a better shot of winning this” and that “it would be helpful to be Latino.”

Despite the mainstream media’s apoplexy, Romney’s sweeping dismissal of working class Americans—who, even though they pay payroll, property, and sales taxes, are still bonafide welfare queens—and his fantasy island paternalism should not be shocking to anyone who has been paying attention to the campaign.  His shucking and jiving about possible political gain from being Latino, while promoting nativist anti-undocumented immigrant policies that criminalize all Latinos regardless of citizenship status, attests to the business as usual racism of 21st century post-racial America.  His suggestion that simply being of Mexican parentage would help him win the election is a racist insult to a Latino electorate which has consistently rejected the GOP’s divide and conquer platform.  Exploiting the politics of white resentment, his entire campaign has been an affront to hardworking people of color who have higher poverty, unemployment, and foreclosure rates than whites with comparable income or education levels.  Both Obama and Romney are delinquent when it comes to specific remedies for racial discrimination against African Americans and Latinos in hiring, lending, home ownership, and wealth generation.  Yet, Romney, unlike Obama, continues to shuttle around to select Latino business groups prattling about free enterprise, ignoring the fact that a majority of Latinos favor government social services and don’t view “free enterprise” and social welfare as mutually exclusive.  Romney and running mate Paul Ryan saber rattle about entitlements for lazy tax-dodging Americans yet support ending capital gains and estate taxes while amassing millions through the plunder of tax shelters, loopholes and offshore accounts.  Romney crows that small business entrepreneurialism is the key to American prosperity yet suggests that low-income college students stop whining and hit their parents up for a loan (like he did).

Not surprisingly, many of the white GOP voters who receive Social Security and Medicare aren’t bothered by Romney’s assault on lower income and middle class folks.  They don’t view themselves as being the target of his diatribe because the perception is that white retirees who don’t pay income tax earned their benefits after a lifetime of hard work.  Romney’s propaganda demonstrates yet again that race and class are inextricably linked—simply being white affords class status and “immunity” from the cultural perception that your poverty is destiny, rather than a special circumstance that free enterprise and a fair shake can cure.  Tim Wise outlines the benefits of white class privilege succinctly in his article “Collateral Damage: Poor Whites and the Unintended Consequences of Racial Privilege.”  Wise argues that poor whites are buttressed by social cues that they can succeed, that they are valued (i.e., that they are human and citizens), and that their poverty is circumstantial.  Discussing the emergence of poverty narratives that centered on black pathology and welfare dependency in the 1960s and 1970s he notes:

Importantly, the white poor, despite their economic condition, generally escaped the full weight of this emerging invective and were not the ones typified as the harbingers of social pathology. Even though roughly 40 percent of the long-term poor and welfare dependent “underclass” is white, virtually all media stories discussing the underclass — inevitably in highly critical ways — have portrayed people of color, with few if any exceptions.  The white poor, despite the growing backlash, have been able to remain the “salt of the earth” in the eyes of most, buffeted by circumstances not of their own making.

Because black poverty is the standard, white poverty is a virtual oxymoron.  Poor white people are essentially invisible as poor people.  When they do come into view, they are proud victims of big government malfeasance who struggle to make it against the odds; not welfare recipients looking for the next handout.  Poor white people just need an honest break to facilitate their bootstrapping a la the Joads of the Grapes of Wrath or environmental crusader Erin Brockovich.  They are automatic beneficiaries of a narrative of heroism and rugged transcendence.  With a substantial part of his base subsisting on government “handouts”, it is this narrative that Massa Mitt taps into, circle jerking with the super-rich about his Mexican parallel universe.