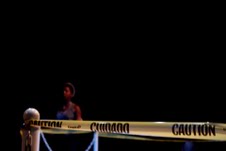 Patrisse Cullors, a multi-faceted performance artist, shared her installation piece, “Stained,” Saturday night at Highways Performance Space and Gallery in Santa Monica, California. “Stained” is described by the artist as a “way Blackness is on the one hand exploited, imprisoned and stretched.” Executive Director of Highways, Leo Garcia, introduced the audience to the space while marveling at the crowd of nearly 100 folk who came out to Art Night specifically for the performance.

Cullors, wearing body hugging ripped jeans and white high top sneakers, encouraged the audience to crowd around the caution tape that served to block in the three performers: Maxwell Addae, Jas Wade, and Three Tres Olivas-Breazell. The audience left their seats to crowd around the caution tape and the space went silent except for a recording of Cullors reading prison correspondence and documentation, collected by her mother, detailing the mental and physical abuses Monte suffered as an inmate.

Cullors successfully used the audience to corroborate the crimes against the prisoners. At once, the crowd became witness and defendant, performing aspects of the of the criminal justice system: police, jury, and corrections officers. Using Jeremy Bentham’s panopticon, Cullors allowed the crowd to become the watchers–an unfair indictment that left many audience members tearful. 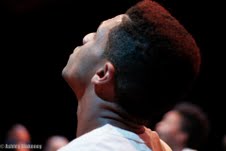 The audience was allowed to judge, dismiss, punish, and criticize the performers as they played the role of prisoners, uniformly costumed in white tee-shirts, gray sweatpants, and brown sneakers. Each performer coped differently as they performed as the imprisoned and  exhibit. Addae exercised while Olivas-Breazell tried to escape, reached for salvation, springing into the air at undetermined intervals. The break out performance, the most unnerving, was Wade’s hysterical laughter turned crying turned laughter, which was impossible to decipher at any given time. The performers then returned to the monotony of prison life, in this case, pasting, billboard style, the ACLU’s federal class action lawsuit against the Los Angeles County Sheriff’s Department to the wall using wheat paste.

“Stained” is an interactive 20-minute performance piece that begs us to ponder multiple theories of imprisonment. What does the imprisoned body do? The imprisoned mind? Performer Maxwell Addae commented, “The act of doing the pushups was a sense of grounding when I searched for a place of peace and sanity.” At “Stained” there is no peace and sanity. Cullors’ voice is a monotone reading, a deluge of brutality: “strapped to a chair,” “psychotropic meds,” “blood came out of eyes, nose and wrists.” The performers are screaming out, exercising, jumping against madness. The audience watches just behind the caution tape gasping, pointing, crying, silenced now that they are part of the crime, part of the system. Behind the standing audience, the empty seats of the gallery space become the final watcher. The empty seats, the heavy black theater curtains, encircle the entire performance locking everyone in, creating a space where the watcher cannot be differentiated from the watched. 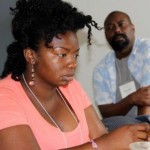 Author bio: Kima Jones writes poetry, fiction, history and geography. Kima is a Voices at VONA alum and 2012 LAMBDA fellow in poetry. Kima can be found online at www.kimajones.com.

Related ItemsCulturePoliticsRegionU.S.
← Previous Story "Shooting For My Own Hand”: A Review of Brave
Next Story → The Politics of Celebrity, Social Media, and HIV/AIDS