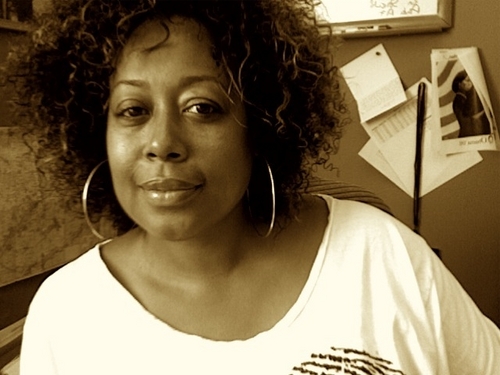 What is left for one to do when she has done everything from interviewing heads of state, writing travel notes on far away and magical places, penning reviews of Lamborghini’s and other notable cultural productions, and profiling up and coming leaders like Mayor Cory A. Booker?  Well, according to Kym Backer, the brilliant, multi-talented, incredibly beautiful (inside and out), and well-traveled Senior Editor of Upscale Magazine, lots!  We recently sat down with Ms. Backer (she let us call her “Kym” so going forward we will refer to her as such) with the hopes of getting a better sense of what this means.  To our delight, she did not disappoint.

Genealogy of a ‘Media’ Star

Kym always wanted to be a journalist. Born and raised in Guyana, she was surrounded by a range of political, media and lived images that were intriguing to her, at times causing her young mind to race with insatiable queries regarding blackness, womanhood, politics, global living, and beauty.

She saw women like Janet Jagan inaugurated as President of Guyana in 1997, and others like her stepmother Deborah Backer, Deputy Speaker of the National Assembly and People’s National Congress Reform, holding “top jobs” throughout the country.  However, while a student at Howard University in the 90s, Kym noticed that different kinds of conversations were happening here in the U.S. around women and power, but more specifically around the intersections between gender and race.  We had not yet experienced a woman president.  And U.S. women, along with women everywhere, continued to struggle for socio-political-economic equality. However, U.S. black women and black Americans in general, seemed to have their own collective and individual hostilities to confront.

Kym was immediately faced with the questions: what does it mean to be black in America, and what is this ‘black’ in the Western imagination?  Influenced significantly by the cinematic genius of Spike Lee at the time, and the representations he both deployed and called into question, she began framing her trajectory as a multi-coastal ‘media’ star, first on radio and television, and then ultimately in print.

As Kym traveled between Brooklyn, NY and London, she became the point person for covering U.S. celebrity life.  Kym eventually began her career in the U.S. doing freelance work for prominent publications like Essence Magazine, a premier magazine for black American and diasporic women.  During this time, she also began honing her ideas around “global blackness,” revisiting Lee’s cinematic representations of U.S. racial politics, identity, and life, and her growing journal of travels, particularly the myriad ways that blackness gets lived from context to context across the globe.  Kym found the typical practice of inserting U.S. racial politics and culture into other countries, sans mutuality, unsatisfying.  In short, it was time to shake things up.  Black American cultural productions of knowledge were historically overly determinant in the diaspora.  That said, Kym thought it was time to make other cultural centers more visible in the U.S. popular press.

Kym remembers “being back in Guyana, observing the possibilities of a new life.” Her longing for a new life soon lead her in search of other worlds, peoples and adventures.  However, it was never enough to simply experience these encounters.  Kym wanted to share them with the world.  Unfortunately, the invisibility of black women in media made this difficult to imagine at times.  And, the lack of black representation in media in general didn’t help.  “I am usually the only black person on an international trip. It is almost if I exist in two worlds: my daily world in black media and the larger media world,” she confessed.  In fact, Kym admitted that she often feels like an “outsider,” having to “learn to talk the talk and walk the walk” in order to maintain her footing in multiple worlds.  “It’s really crucial to develop a comfort level in different platforms,” she asserted.

Yet, there is a pervasive “global blackness,” the reality that black people are everywhere in the world even if it seems otherwise, that also must be contended with.  However, “global blackness” is two fold.  On one hand, there is the reality of black presence and contributions everywhere.  On the other hand, there is the reality of black American life and cultural production as a determining global force.  She states, “Black people are all around the world. We’re everywhere. I think that it is crucial to develop a level of comfort in spaces beyond our shore. We need global relationships…the world is getting smaller. We are linking much more easily through social media. It’s crucial for us to understand that.”  However, black Americans are included in the global community, not the sole voices or representations.  Meaning, it’s wonderful to see what’s happening in the St. Louis black cultural scene, for example.  However, Guyanese and other black cultural centers are equally sublime.

The Move to Upscale Magazine 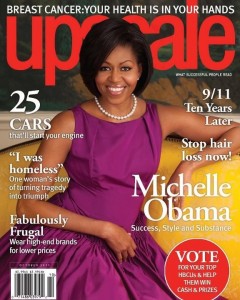 Kym’s global perspective made her a perfect fit for Upscale Magazine, a lifestyle monthly founded by the Bronner Brothers 25 years ago—a time when magazines specifically focusing on black Americans were limited. Upscale began with an emphasis on hair care.  However, given the vast movement and evolution of media, it faced a pressing need to expand and market to different demographics. Kym’s first position was that of Lifestyle Editor, where she labored to present different aspects of black culture, especially when it came to black women.  Her aim was to present them as mobile, smart, witty, and cultured.  Kym mused, “it would be unhelpful for Upscale to present successful, upwardly mobile black women as an anomaly.”  And, for those simply wishing to be or move “upscale,” well…that’s what Upscale is all about.  It provides roadmaps to success via articles on finances, fitness, entrepreneurship, etc.

The art of self-expression and the lure to travel are two aspects of Kym’s persona that has guided her movement in the world since her childhood days in Guyana. In fact, Kym understands self-expression as an act of necessity for those living within certain geopolitical contexts. She notes, “When you come out of a land that was part of a British colony, you learn how to express yourself.”  But voice and wanderlust are just two of the many elements that every budding journalist should possess. Luckily, Kym has been in possession of both most of her life.  When asked what advice she’d give other black women wanting a career in media she stated, “Find your comfort level…but read other things [and] become curious about the world….Learn to converse on a great many things.”

To Be or Not To Be Feminist

Kym’s commitment to celebrating the diversity of black womanhood—in her role as Senior Editor of Upscale—is in no way contradictory to her own political commitments. She states, “I have always been extremely fluid. I do what’s best for me.”  However, when asked about feminism she retorted, “I consider myself a feminist.  However, feminism is fluid, not as sharply defined as the 60s and 70s.”  And while there are many feminisms, Kym understands her feminist politics to be centered on “equality, having a voice, having a say, and taking a stand, particularly for things like equal pay.”  Though she acknowledges that the stances one must take in the face of inequality may make some uncomfortable and dismissive, Kym maintains that one’s ability to lift up her voice is key. This includes defining feminism for one’s self.  She asserted, “I feel like everyone has to speak on it individually.  It’s subjective…yet with basic tenets, like equality and having a voice.”  It is apparent that Kym has mastered the use of her own voice. We are certain that she has much more of herself, her voice, to share…

The Race is Not Finished

Although a seasoned and accomplished journalist, media personality, and editor, Kym still has plenty up her sleeve.  There are more stories to tell, interviews to give, and places to travel.  When asked about her dream job, Kym said that she would like to write a daily profile of the Obama’s, or conjure Bob Marley for an exclusive interview. Regarding the latter Kym enthusiastically declared, “I go into every corner of the world and I hear his music!”  Well, if she can’t get an audience with Marley or the Obama’s, we happen to believe that Kym will continue to do the work that not only makes her and others happy, but draws people in.  At the end of our conversation she murmured, “not everyone can draw people in” like Marley could. She’s right. Nevertheless, we happen to believe that Kym is one of those other people who can do the job—in her own way.  We are nothing short of confident that the only direction that she will travel next is up.

Related ItemsCultureentertainmentUSWorld
← Previous Story The Invisible War: A Film on Rape, Women and Combat (A Review)
Next Story → Are women occupying new movements?