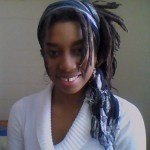 Nev Nnaji is the producer/director of Reflections Unheard: Black Women in Civil Rights, an upcoming feature-length documentary which focuses on the marginalization of black women between the Black Power and Feminist movements of the 1960s and 1970s.

Nnaji is a graduate of the Boston University Film Department, where she produced and directed several short narrative and documentary films. She first began to articulate issues concerning oppression(s) during her experience in a Nigerian boarding school, and later developed a passion for film and feminism in college. Nev Nnaji currently lives and works in Northampton, MA as a freelance artist and filmmaker.

Nnaji: First, let me say that determining the “plight” of women filmmakers largely depends on what is considered success. I don’t judge the talent or success of myself, or any other woman filmmaker, based on how many awards she has received or whether her film has premiered on HBO. There are spaces where women filmmakers are celebrated, but they are not going to provide the same glitz, glamour, and financial rewards that are afforded to male and other privileged artists. If you’re a socially disadvantaged filmmaker, you really have to respect the craft because there are too many financial and emotional hurdles involved in this process.

My experience in film school opened my eyes to a lot of the prejudice that goes on in the industry against women. Most of my professors were male, and many of them did not respect female students–partially because they are so accustomed to working in an environment where the only women on set are thought to be “beautiful” actresses, not people with creative control or agency. Judging from demographics alone, at least 50% of the films made in our department should have been written and directed by women, but because our “democratic” script-voting system was comprised of people whose minds were colonized, almost all of them were written by white males. I took film school to be a representation of what goes on in the real world, and I decided that I will not submit myself to any work with artists who do not value my perspective as a queer woman of color. Independent, digital media is on the rise, and I’m glad to see more women filmmakers taking advantage of that, however.

From the very first film I made up until now, I have made it a priority to have black female protagonists in all works that I have produced. The one time I directed a script in which there were no strong female characters, I felt spiritually drained at the end of the process and vowed to never do anything like that again. I have created works that did not address race, class, or gender issues, but I always still worked my ass off to have a talented black female protagonist. Although I’ve met several women filmmakers who don’t share these values, I strongly believe authentic cinematic representation is important for any underprivileged and/or misrepresented group. I also acknowledge the fact that my access to a camera, editing system, and other filmmaking resources is a privilege. Because of this, I accept full responsibility to retain authenticity and rawness in all of my work regarding women.