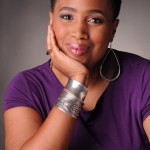 Aishah Shahidah Simmons is an AfroLez®femcentic Cultural Worker whose award-winning work has been screened extensively across North America, and in numerous countries in Europe, Africa, Asia, South America, and the Caribbean.

AISHAH: I am an African-American feminist lesbian cultural worker who has primarily used the camera lens–as a producer, writer, and director–to advocate for and make central some of the many things that have been and are on the periphery of society. I credit the late Black feminist cultural worker, organizer, author, and screenwriter Toni Cade Bambara, who was my teacher, mentor, and Big SistaFriend for five years, for my profound understanding that using the camera lens to bring progressive ideas, images, perspectives, and voices from the margins to the center is a form of radical social change and community activism.  I also learned from Toni that the role of the artist/cultural worker is to make revolution irresistible.

I chose film/video as one of my tools to make radical and compassionate progressive social change irresistible because we live in an age where people are inundated with images, the majority of which are both directly and indirectly manufactured by a handful of global corporations. Very unfortunately, the overwhelming majority of these images either completely ignore what is in the best interest of the majority of the world’s human inhabitants or they reinforce negative stereotypes of the majority of them. Film/video are powerful mediums where in addition to personally using it in activist/organizing/educational work, one can send a DVD in the mail or upload video content on the web and those images can galvanize, organize, educate and motivate millions of people around the world.

Since the early nineties, I developed a deep and profound appreciation for and understanding of the critical need to shed light on controversial and ignored subjects within Black communities, without reinforcing stereotypes. My goal with film/video is to visually engage audiences while organizing, educating, and encouraging them to work towards eradicating racism, sexism, and homophobia, in all of their violent manifestations. My previously completed work (Silence…Broken, In My Father’s House, For Women of Rage and Reason, NO! The Rape Documentary, and Breaking Silences: A Supplemental Video to NO!) explores the impact of the intersections of race, gender, and sexuality on the lives of Black women and girls. Too often documentaries are not made by people who are part of the community they are documenting, when it comes to non-fiction (documentary) filmmaking.  I believe this is a form of voyeuristic filmmaking.  In some, but definitely not all instances, ‘voyeuristic filmmaking’ has resulted in a distorted view of the documented communities. I have worked diligently to ensure that the creative production and post-production teams of the projects I directed have been predominantly women in decisionmaking roles, inclusive of lesbians, young and older women, most of who are of African descent.