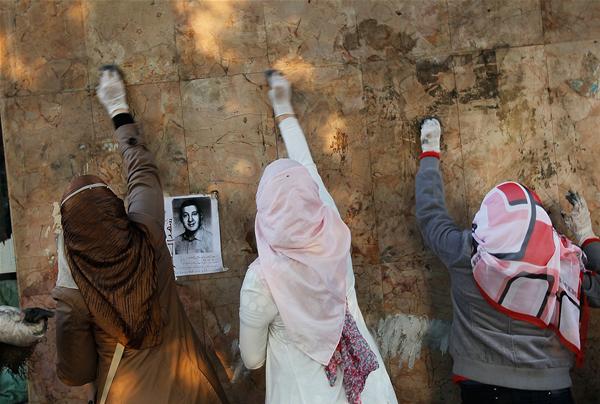 After playing an integral part of the revolutionary efforts last year, Egyptian women fear their rights will not be incorporated into the country’s political reforms. Despite being present on the streets and suffering abuse during the protests, female protesters were later subjected to government-supported virginity tests and other invasive fear tactics.

Women have stated that the government took the last thing that truly belonged to them — their bodies — and that they have little options available to communicate their discontent and opposition. An effort to paint Cairo in graffiti art has gained popularity by women and girls who are determined to voice their convictions and demand equal representation in political decisions.

The American University in Cairo (AUC) has recently launched an initiative to preserve the murals painted on the walls of Mohamed Mahmoud Street around AUC’s Tahrir campus. Plans are underway to preserve the current images, life-size, in another medium so that they might be later displayed.

In the aftermath of the Port Said tragedy, artists painted murals on walls surrounding the Mohamed Mahmoud street to commemorate those who lost their lives during the revolution and recent uprisings, to recognize the role played by women and to depict the relationship between the ruler and the general populace since Ancient Egyptian times. The works of art have attracted a large number of visitors, initiating a wide range of political discussions. Recently, however, several walls have been repainted by authorities –– an action deemed by several faculty members at AUC as a considerable loss of popular art in a legitimate artistic space.

Watch a video in English on the topic: Washington Post