Coming Into Consciousness – The Feminist Wire

In the three years that I’ve been involved in the Women’s Leadership Project (WLP) my awareness and outlook on social issues have been positively impacted. Before I joined I was unaware of issues like HIV/AIDS, domestic violence, and de facto segregation and how they directly affect my community. I’m not embarrassed to admit that I was ignorant of the issues that have the potential to destroy my community, because it’s not my fault that no one ever took the time to educate me on these matters.  WLP has made me aware of issues that degrade women; as a result, not only am I conscious, but I am outraged and determined to actively do something about it. My participation in WLP increased my interest in talking to young women in my community to raise awareness. I’m encouraged to advocate and be active in my own school-community.

While all the social issues we discuss in WLP are of great importance to me, the issue of mainstream media and female representation really concerns me. The media degrades women and decreases a woman’s value by displaying them as sex symbols. There is also a big difference between how white women are depicted versus Black and Latina women. A specific example is evident in music videos. White women are rarely featured dancing half-naked in front of numerous men, but women of color are. In Robin Thicke’s music video “Sex Therapy,” the white singer is shown with several different women of color who are scantily dressed.  There is even a scene where four women are waiting for him in bed. The four women in his bed raises a completely different issue, namely, the fact that society praises men for having multiple sex partners but is quick to label a woman a “slut” or “ho” for having multiple partners.

I feel like I have to rise above the stigma associated with my community. Hopefully, my activism and decisions to pursue a college education will encourage my younger peers to follow the same path. It’s sad that many youth don’t believe that attaining a quality college education can be their reality because they are not being encouraged by adults; they too often have the same false belief. Other young people of color, particularly women of color, I need you to believe that there is so much more to life than marriage, babies, drugs, and minimum wage jobs. I’m living proof that we have access to that life if we choose to pursue it.

[Editor’s Note:  This article continues our series by young feminists responding to the International Women’s Day challenge of creating progressive programs and culture for girls.] 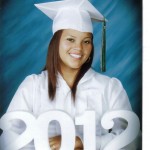 Miani Giron is the president of Women’s Leadership Project at Gardena High School.  She is a Horatio Alger Foundation and Posse Foundation scholarship winner and will be attending Syracuse University in the fall.